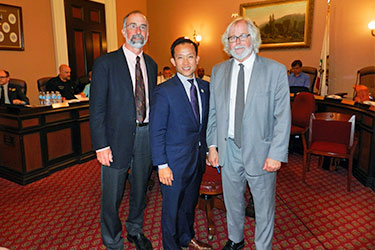 The meetings were part of the Joint Legislative Conference sponsored by the State Building Trades Council and the California Labor Federation. The Bay Area legislators expressed support for Labor's 2017 legislative package. Many had voted overwhelmingly in favor of labor's bills in the 2016 legislative session, with Chiu and Mullin having earned 100 percent pro-labor voting records.

Governor Brown acknowledged the crucial role of California Labor unions in passing Senate Bill 1 that will invest $50 billion over the next 10 years to repair California's roads and bridges and create good jobs across the state. Ending his speech on a strong note of solidarity, Governor Brown encouraged people to keep up the fight for justice and for working families saying, "California is marching forward to a world that works for all of us!"

Bills supported by the building trades this year build on some of the successes of the past few years, including strengthening enforcement of prevailing wage laws and expanding the use of Project Labor Agreements.

"I support the principle that if there is public money, prevailing wages should be paid," Chiu said.

Senator Wiener said AB 199 sounds like a good bill and that he would look at it. Several legislators noted that bills change as they move through the state legislature. Senator Hill said, "I believe in prevailing wage and will support it." Assemblymembers Ting and Mullin said they support the bill; and Berman said he had voted for it in the Transportation Committee.

AB 890
Sprinklerfitters Local 483 Business Rep Tony Rodriguez said developers try to bypass the California Environmental Quality Act (CEQA) review process by putting a project on a local ballot for voter approval. AB 890 would protect the integrity of CEQA by requiring CEQA-related local initiatives to provid a process for environmental review. Senator Hill chairs the Environmental Quality Committee and supports CEQA and likes the idea of the bill, but would wait until it reaches the senate before committing to support it. Ting said the bill makes sense and the legislature is trying to find a balance between streamlining housing construction and maintaining the environmental review process.

"We need to look at some streamlining and how we deal with the affordable housing crisis and build more but still build union," Mullin said. Berman said he was happy to support the bill when it came before the Elections Committee.

SB 306
San Francisco Labor Council Executive Director Tim Paulson said SB 306 is a priority for labor. The bill strengthens worker protections against wrongful termination by allowing for immediate injunctive relief when workers face retaliation for acting as whistleblowers and requires the court to consider the chilling effect on other workers from retaliatory actions against their right to organize. Senators Wiener and Hill said they support the legislation. Chiu said he supports the bill; Mullin and Berman said they would wait to see how the bill changes when it reaches the Assembly before committing to vote for it, but supported the principle of the bill.

SB 772
SB 772, authored by Senator Connie Leyva, a former president of the California Labor Federation, improves the regulatory process for worker safety. It allows worker safety regulations to be exempt from a lengthy process which delays the implementation of regulations that provide safer working conditions. Senators Hill and Wiener said they support the bill. Ting and Chiu offered support for the bill; Berman said the bill provides a way to protect programs in California as the federal government undermines worker protections. "If it's a labor program Trump is going after, I will support protecting workers and try to codify Obama's regulations into our state law."

SB 49, ACA-4
Other Building Trades bills for 2017 include SB 49 by Senator Kevin de Leon, which preserves federal clean air, climate, clean water and worker standards enforceable as a matter of state law even if the federal government rolls back and weakens those standards. Another priority is ACA-4, which allows communities to approve new revenue for local infrastructure projects and services that improve quality of life with a threshold of 55 percent instead of the current two-thirds vote requirement.

The legislators also talked about their priorities and bills. Wiener said he is focused on housing and transportation.

"I want to help people who earn too much to qualify for low-income housing be able to afford housing – so middle income housing is a priority," Wiener said. He added that he is obsessed with improving public transportation, and that with the Bay Area population projected to grow by two million, more rail and bus lines are a necessity. Wiener said he supports lowering the threshold for approving transportation funding to 55 percent. SFBCTC Secretary Treasurer Mike Theriault said Wiener had been a critical vote for a project labor agreement on Bay Restoration Authority work.

Chiu said as Chair of the Housing Committee he works with the state building trades on ways to create more housing. He said he will continue to fight for tenants and address homelessness. Chiu touted his bill, AB 450, which would protect immigrant workers from worksite raids. It requires that an immigration enforcement agent have a judicial warrant before entering a private business and have a subpoena before getting access to employee records, while also requiring the employer to notify the Labor Commissioner of imminent worksite raids or immigration audits. "Trump happened – he has declared war on the diversity of our state," Chiu said. "Trump has signed several unconstitutional executive orders; if ICE comes knocking on your workplace door, you need to make sure they have a warrant. This is required under the Constitution, but Trump does not care."

Chiu said he is leading the fight to try to lower the cost of prescription drugs. "Pharmaceutical companies charge thousands for drugs and are crushing our health care costs," he said. He called for transparency in how prescription drugs are priced.

Assmblymember Ting said, "We are going in a different direction than the rest of the country. We don't want to go in the direction of dirty air, no protections for workers. We are going to fight, together."

Mullin said California is looking at what Trump is doing and how to be strategic in protecting California workers, including immigrant workers. Berman said he is looking at revising the state's plan for higher education established in the 1960s. He said he was looking into a bill supported by SEIU to regulate for-profit colleges as the Trump administration and Education Secretary Betsy DeVos cut back on federal regulations of private schools.

Union members also received pledges of support for many bills promoted by the California Labor Federation.