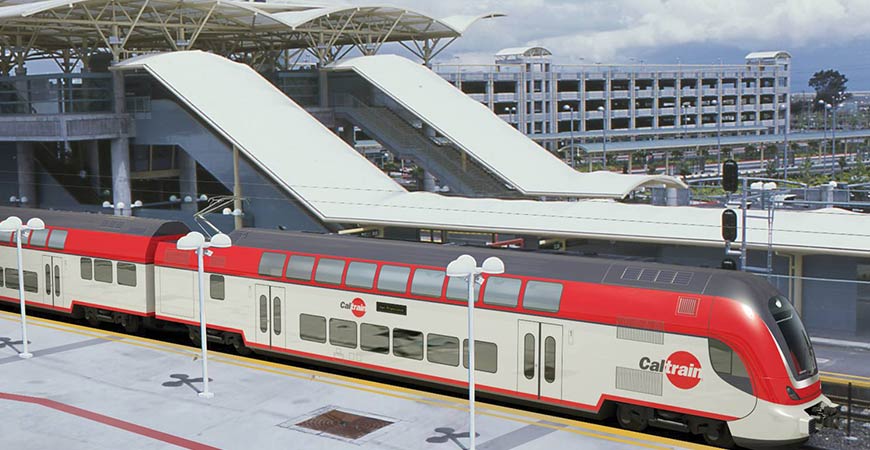 The U.S. Congress approved a federal budget package in early May for 2017 that includes $100 million for Caltrain's Peninsula Corridor Electrification Project (PCEP). The Federal Transit Administration (FTA) in February held up the release of a $647 million federal grant for the PCEP at the request of a group of California Republican Congressmembers claiming to be concerned about cost overruns for high speed rail, led by House majority leader Kevin McCarthy, a longtime opponent of high speed rail. The Caltrain rail corridor, once electrified, will serve as the rail line along the Peninsula for the state's planned 220-mph trains between San Francisco and Los Angeles. Full funding for the PCEP from the federal government is still deferred until the Trump Administration develops its 2018 fiscal year budget.

A May 3 press release from Caltrain noted that approximately $73 million in Federal Core Capacity funding had already been set aside for the project in prior years. Approval of the 2017 budget and execution of a Full Funding Grant Agreement (FFGA) by the Federal Transit Administration would make over 25 percent of Caltrain's total $647 million federal funding request immediately available to start construction of the project, which would create more than 9,600 jobs.

"We are cautiously optimistic that bipartisan approval of the budget will be a signal that the administration plans to follow through with a commitment to invest in Caltrain electrification so we can put thousands of Americans to work and do our part to help drive the national economy," said Caltrain Executive Director Jim Hartnett. "Since the news of the delay in authorizing our FFGA, this is an encouraging sign that the efforts of our Congressional delegation and the employers and riders who have joined us in advocating for this project are having an impact."

The project would convert the Caltrain rail corridor to an electric rail line from the 4th and King Station in San Francisco to the Tamien Station in San Jose, enabling Caltrain to increase the capacity of the system. Over 65,000 daily riders currently commute via Caltrain. The agency notes that "by connecting communities with more service to more stations and reducing travel times, electrification will make Caltrain even more attractive, equipping the system to accommodate more riders and providing significant relief to drivers on busy local streets and roads and increasingly congested freeways."

Over $1.3 billion has been secured to modernize Caltrain from state, local and federal funding sources. The project is ready to start construction, and the final step is approval of the federal grant.

"We're hoping that this is a signal that the administration will be prepared to move forward with the grant and we can start construction," said Caltrain Chief Communications Officer Seamus Murphy. "It's good progress. We just need two things to happen for that $100 million to be accessible to us; one is to get the full funding grant agreement signed and two is for the legislation to be approved by Congress and signed by the president."

"This project is ready to go and the contracts have been signed," Theriault said. "All we need is a check from the feds and the contractors will get a notice to proceed and we will be off and running."

Congresswoman Anna Eshoo said, "I think that it's a positive sign because it's an expression of Congress, but it still has a long ways to go. It's $100 million, and the grant was for $647 million." Eshoo called the California Republicans' efforts to delay funding for Caltrain a form of "political blackmail" to stop California's high-speed rail project.

Eshoo noted that the Caltrain electrification program would create "nearly 10,000 American jobs – all American equipment and it's shovel ready, it is ready to go. If the president means that he really wants shovel-ready projects that will produce American jobs, it's right there in front of him." Eshoo pointed out that Caltrain is the first agency to meet all of the grant requirements and not receive a full funding agreement.

"I call this the best funded non-grant in U.S. history," Congresswoman Jackie Speier said in a statement. "This is an example of government sabotaging its own bipartisan decision to fund a project that would create 9,600 jobs, reduce Caltrain carbon dioxide emission by 97 percent, and put more riders on trains and fewer cars on the road during rush hour. These funds sit idle unless Transportation Secretary Elaine Chao signs off on a Capital Investment Program grant. I urge the Trump administration not to play politics and not to derail this shovel-ready infrastructure project."

In February, Caltrain committed $20 million to extend contracts already awarded for work scheduled to begin in March. Caltrain now has until June 30 to start construction in order to avoid further cost increases.

"Caltrain is not only bulging at the seams, it's falling apart in one of the most important economic regions that produces for the rest of our country," Eshoo said. "No matter which way you examine the case, it's just a win across the board. It will be faster, it will be quicker, it will reduce what it pollutes now. … What's taking place in killing this has sent a chill throughout the country."

At a press conference April 24 at the 4th Street Caltrain station in San Francisco, local elected officials joined business and labor leaders to call on the Trump administration to sign off on the full $647 million federal grant.

Redwood City City Council member Jeff Gee, who chairs the Caltrain board of directors, said "Every day over 60,000 people commute on Caltrain. It is so important for the region. It moves people, and we see a trail of innovation and technology along Caltrain line. Caltrain needs many critical updates, and after two decades of planning we were finally ready to begin the modernization – a shovel-ready project that will create 10,000 jobs in California and many more around the country and a system capable of transporting 100,000 riders, and reducing congestion"

Representative Speier said, "We are here because the Caltrain project is in jeopardy and capital investment grant program is on the chopping block. It would stop 55 projects in 19 different states. The president keeps saying 'make America great again,' but the president's proposal would make America stop. If we are to make America great again, we have got to create jobs. This temporary stop is costing about 9,600 jobs. The American Public Transportation Association says that for every $1 billion invested in transit there are 15,900 jobs created. This $2 billion project has the potential to create 31,000 new jobs."

Speier noted that some Republicans in Congress oppose the project because of money coming from the high speed rail fund. "If you play politics with this project and others across the country, potentially costing 600,000 jobs, then Mr. President, you are not someone who can be trusted to create jobs in this country," Speier said.

San Francisco Mayor Ed Lee said, "The electrification of Caltrain is absolutely critical to maintain a strong Bay Area economy as well as a thriving San Francisco. This was not thought of in just the last 100 days. This has been in the works for over 25 years. We anticipated that if we are growing the economy in the entire Bay Area from San Jose to San Francisco, we're going to have to modernize Caltrain. That extra capacity is needed more than ever now. Our entire Bay Area is growing. Ridership has doubled in the last 10 years. If we don't accommodate the increase in commuters, we will end up with more cars clogging our streets and highways. Have to invest in this line. By electrifying this line we will be able to add more trains, cut commute time, save fuel costs, improve air quality, and reduce noise and ease traffic congestion. This is an American system, made by and for Americans. Let's put more Americans to work."

Eshoo said the PCEP is a good use of taxpayer dollars. "California is a donor state to the federal government – we send more money back to Washington than we get back," she said.

Carl Guardino, CEO of Silicon Valley Leadership Group, said, "We in the Silicon Valley have put our wallets where our words are and we expect our federal government to do the same. The SVLG supported local measures to fund modernization of Caltrain. It is an economic and quality of life imperative. The Caltrain corridor has 1.6 million jobs; it represents 20 percent of all the sales tax revenue in California and 13 percent of our gross domestic product. We need to keep Caltrain electrification moving because it keeps California and America's economy moving. Look past politics to the projects that put people back to work."

Theriault said national building trades leaders met with Chao and urged the project to go forward, but the efforts have not yet succeeded. "It's possible the president has decided to have an adversarial relationship with the most populous state in the nation for the duration of his presidency – however long that may be," Theriault said. "I would ask him to look past California. There are manufacturing jobs coming out of this in Utah, and jobs in Pennsylvania, Ohio, Wisconsin, and Florida – states that went very narrowly for the president in the last election primarily because, I think, workers there believed the president would have their backs, that he would provide them work and take care of them. This project will absolutely do that. He should bear that in mind. Some of us think America never stopped being great, but if the premise to make America great again is to give jobs to people who have lost them, this project does that."

"We just need that one signature to get the project started," said Caltrain chair Jeff Gee.