Salesforce Tower Tops Off at 1070 Feet 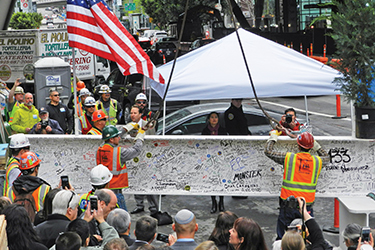 There’s debate as to which is the tallest building west of Chicago. The Wilshire Grand in Los Angeles is 30 feet taller than Salesforce Tower thanks to a 295-foot spire affixed to its top. Salesforce Tower has the highest floor that can actually be occupied.

Boston Properties spokesperson Michael Cantalupa thanked architects Cesar Pelli and Fred Clark for their design that is “making an extraordinary building in an extraordinary place. But this is more than an office building – it is fundamentally an act of optimism and faith in the future.”

“It’s tremendously gratifying to see nearly a decade of design and planning finally approach the finish line. And at this point, the building is exceeding even our most optimistic expectations,” said Paul Paradis, Hines Senior Managing Director. Paradis said the building’s design with open, column-free floor plans provides flexibility for tenants’ offices. He said the building is 70 percent leased, with Salesforce as the main tenant.

Paradis said the tower meets LEED Platinum certification – “the pinnacle of sustainability” – and will feature clean air and natural light. The tower also goes down 300 feet below grade and is firmly anchored into the earth’s bedrock, he said.

“Boston Properties is honored to lead a project that is bringing so much attention and new energy to San Francisco,” commented Bob Pester, Executive Vice President, San Francisco Region for Boston Properties. “Designing and developing a building that is a beacon to our city and will be the first thing you see coming into the City has been very rewarding. We look forward to celebrating this important moment with our partners.” He thanked Supervisor Jane Kim for working with developers to get projects built in San Francisco, noting that the Salesforce tower is the third Boston Properties project in her district.

Supervisor Kim said that when the Transbay Tranist Center broke ground eight years ago, building an office tower next to it was a risk. She said at the time many construction workers were unemployed, and the Transit Center and nearby projects put many back to work. “This project has created thousands of jobs, with 25 percent of the construction jobs going to San Franciscans,” she said. “This is truly changing the skyline of San Francisco and showing what the city can do when we come together.”

San Francisco Mayor Edwin Lee also acknowledged the hard work of the men and women in the building trades, noting that the unemployment rate in the city is now only 3 percent. He said Salesforce has been a key partner to San Francisco for years, “bringing thousands of jobs to the city and giving back through donations and volunteer programs.” Lee said Salesforce CEO Marc Benioff has been a strong supporter of the building trades lab at John O’Connell High School, which gives students an opportunity to learn about construction trades and design.

“Salesforce Tower represents the company’s significant impact in the city, and reflects Marc’s commitment to San Francisco as the business continues to grow,” Lee said.

Height, in feet, of Salesforce Tower

Percentage of construction jobs that went to San Franciscans

“I am deeply grateful to everyone working on Salesforce Tower as we celebrate this incredible milestone. My hope for this building is that its meaning goes beyond its beautiful glass and steel structure,” Benioff said. “May the meaning of Salesforce Tower be the people within it who are deeply committed to making this city a better place for all of its citizens. Salesforce employees don’t just make great products for our customers’ success. We’re also devoted to giving back to the communities where we live and work.”

Benioff, who grew up in San Francisco, said he was committed to giving back and that he believes his employees have a duty to volunteer in schools and hospitals “and take care of those less fortunate than ourselves, especially San Francisco’s homeless population. San Francisco has a bounty of richness, but we also have problems,” he said.

Benioff said the top floor of the 61-story tower would not have offices but would be used by the company for meetings and then be open on weekends for non-profit groups to hold events at no charge. Benioff said his company is a growing software company with 25,000 employees. “We will have 30,000 by the end of the year, with 10,000 in San Francisco,” he said. Salesforce was founded in San Francisco 18 years ago and today is the city’s largest technology employer.

After Benioff’s comments, two ironworkers rigged the wide-flange beam bearing dozens of signatures of construction workers, employees of the developers, and others, and a crane operator hoisted it to the top of the tower.

The 1.4 million square foot Salesforce Tower also features approximately 7,000 square feet of rentable retail space on both the ground and fifth floors, and a 200,000 square feet underground garage. The building is engineered with enhanced seismic safety and high performance design features, including forty-two 5 foot by 10 foot steel reinforced concrete load bearing elements extending from the foundation down all the way into bedrock. The 14-foot by 9-inch slab to slab heights allow for approximately 13-foot high unfinished ceilings, 10-foot high drop ceilings and soaring 10-foot high continuous clear glass windows. This frames a column-free interior providing maximum natural light to the work space. The top 150 feet of the tower will feature the highest public art light installation in the United States.

The building features an HVAC system to distribute outdoor air to each floor and a unique under floor air delivery system that circulates air directly to tenants’ spaces and features individual control capability. It is designed to be up to 40 percent more energy efficient than those used in standard office buildings.

The completion of the project is scheduled for July 2017, with plans for tenants to take occupancy in October of 2017. Salesforce will occupy floors 1-30 of the building and the 60th and 61st floor. The other floors will be leased out to other tenants including Accenture, CBRE and Bain & Company.