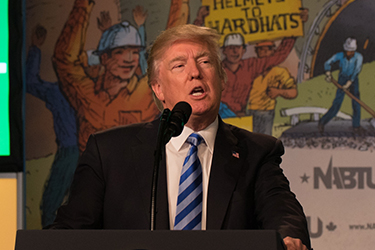 North America’s Building Trades Unions (NABTU) held its Legislative Conference in Washington, D.C., from April 2 to April 5, where Building Trades union members got an opportunity to learn about important legislation and meet with members of Congress to build support for building trades issues.

The San Francisco Building and Construction Trades Council was well represented at the conference.

More than 3,000 national, state and local building trades leaders from across the United States heard speeches by elected officials, industry representatives and union leaders, including NABTU President Sean McGarvey, who said the building trades should look beyond party affiliation and work with members of Congress who support the Building Trades’ agenda. McGarvey said the organization was committed to a bipartisan approach to politics that seeks to create “Building Trades Majorities” within federal, state and local governments.

In his keynote, remarks, NABTU President Sean McGarvey delivered a forceful message imploring the assembled delegates to remain committed to a strategic operational approach that would enable NABTU unions to be fully prepared for expected challenges and opportunities that will directly affect the US construction industry, generally, and the union construction sector, specifically.

“I’m sure most of us had anticipated coming to Washington this year under entirely different political circumstances,” McGarvey said. “And while it is, indeed, not the most advantageous political landscape we have ever seen, history has shown us that things need only be as bad as we allow them to be. Let me give you a little perspective. We faced a similar situation after the 2004 elections when the Republican Party controlled both the US Congress and the White House. But we survived.”

McGarvey noted that, “We have a Republican President, and Republican majorities in both the US House and the US Senate. At the state level, Republicans hold a ‘trifecta’ in 25 states, where they control the Governor’s mansion, as well as both houses of the state legislature. Republicans control both legislative chambers in 32 states, including 17 with veto-proof majorities. By contrast, the Democratic Party has only 5 state-level ‘trifectas, and has control of both legislative chambers in just 13 states. As a result, we are seeing organized campaigns to push an agenda of anti-worker policies associated with Prevailing Wage; Right to Work; Paycheck Deception; and other issues. Now remember, not all Republicans are our enemies and not all Democrats are our friends.”

The NABTU president pointed to a few positive signs for the Building Trades:

“Let’s not forget that our membership numbers have been on the rise for three of the last four years. And our national market share, excluding the residential market, is now approaching 45 percent,” he said. The NABTU has also entered into formal labor-management agreements with energy industry groups that have expressed public support for the federal Davis-Bacon Act.

McGarvey said that at a meeting with Donald Trump in January, “we were quite forceful with the President in stating our concerns that infrastructure investments must be coupled with strong community wage and benefit standards afforded under the Davis-Bacon Act.” He said the NABTU would work with Senator Chuck Schumer, the Democratic Leader in the US Senate, and Democratic Senators who “are also talking about a robust infrastructure investment plan,” and that the Building Trades will remain engaged in discussions with them.

“It is in the best economic interests of our members and our unions,” said McGarvey, “for us to go everywhere and anywhere with business and industry leaders, community leaders and political leaders, and to engage in deliberations, conversations and discussions that have the potential to advance the economic interests of our members and their families.”

McGarvey said the Building Trades unions are doing tremendous work around the country to build opportunities and pathways for historically neglected communities all across America. “… our unions are aggressively engaged in close partnerships with construction end-users like Shell Oil Company, and with our signatory contractor partners and community-based groups like YouthBuild and the National Urban League, to launch ‘apprenticeship-readiness programs’ in metropolitan and rural areas across the United States. In fact, today we have roughly 120 such programs in operation across the nation, where we are providing young people and transitioning adults with the necessary skills to not only enter, but to succeed, in a registered apprenticeship program and find their place in the American middle class. In 2015-2016, 83 percent of the graduates of our apprenticeship-readiness programs were people of color, and 23 percent were women. And because of initiatives like our Apprenticeship-Readiness and Pathway programs, the fact is, the demographic characteristics of our unions are looking a lot like the demographics of our nation.”

The NABTU’s Helmets to Hardhats program had over 13,000 registrations and over 2,000 successful transitions into the building trades in 2015, McGarvey said. “We intend to transition our Hardhats for America effort from 2016 into a formal 501c4 organization known as Re-Build USA. The focus of Re-Build USA will be to design and execute a comprehensive and effective communications campaign designed to reach our members where they live and work… Re-Build USA will endeavor to hold the President and all elected officials accountable, not only in terms of living up to the fundamental economic promises that were made during the campaign and which attracted the support of significant numbers of our members, but to also oppose and reject adverse policies and proposals that run counter to those promises, including and especially attacks on prevailing wage standards at both the federal and state levels.”

McGarvey acknowledged that, “Yes, we were knocked back in the 2016 election. But, that pales in comparison to how we got knocked down in 2008 when the economy tanked and our membership and their families were devastated.” He listed some of the actions taken to “pull ourselves out of that quandary,” including building partnerships with construction end-users, building community coalitions to create career training pathways through apprenticeship-readiness programs and formal apprenticeship education and training, and increasing investments of pension money into funds that create jobs for building trades members.

The Building Trades’ legislative priorities for 2017 focus on many of the same issues union members prioritized at their 2015 conference: infrastructure investment, energy policy, project labor agreements, maintaining Davis Bacon, water resources reform, and reforming permitting for development. The NABTU also called for legislation to support workforce development and training and reiterated its support for the James Zadroga 9/11 Health and Compensation Reauthorization Act, which provides funding for workers suffering adverse health impacts from working on the clean up and rescue efforts following the September 11, 2001 terrorist attacks.

Building Trades members were encouraged to tell their elected officials to support Davis-Bacon and fight against efforts in several states to repeal or undermine the law and the payment of prevailing wages. Members were also urged to tell their elected officials to support the Project Labor Agreement option for Federal projects and oppose congressional efforts to mandate prohibitions on this important construction management tool.