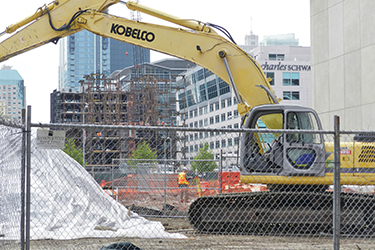 Once completed, the 39-story tower Folsom Bay Tower will have 391 units and nearly 10,000 square feet of retail.

General contractor Lendlease has begun preliminary site work at Tishman Speyer’s Folsom Bay Tower project at 160 Folsom in the Transbay Transit District. Work before the official groundbreaking includes pile cap removal, excavation and grading. The San Francisco Board of Supervisors approved unanimously a height increase for the residential tower from 300 feet to 400 feet last April, which will allow Tishman Speyer to build a 39-story tower with an additional 73 housing units. Tishman Speyer had agreed to increase the number of affordable units, and cover the cost of their construction, in exchange for the height increase. The Board approved the sale of a City-owned section of the site on Folsom between Main and Spear Streets last summer.

When completed, the 39-story tower will have 391 units, with 156 affordable to low and moderate income households. Units set aside as Below Market Rate would be distributed within the first 26 floors of the 39-story tower and an eight-story building on-site. Tishman Speyer would also help subsidize part of the cost of homeowner association fees for residents who make 80 percent of area median income. The 160 Folsom project, designed by Chicago architect Jeanne Gang, also includes 9,126 square feet of retail, 6,544 square feet of open space, 344 vehicle parking spaces and 150 bicycle parking spaces.

“The tower remains silvery gray, a blunt corkscrew softened by those tightly spiraling lines of what Gang calls ‘migrating bays,’ each one with a slightly different angle than those around it,” wrote San Francisco Chronicle urban design critic John King. “The base, though, now looks like an ensemble of buildings rather than leftover pieces of the tower. The eight-story wing would have broad bays and metal cladding the tone of a copper penny, while the [four story] town houses would present textured off-white panels above brick-clad entryways.”

The architect’s website notes that, “The design evolves the classic bay window, a familiar architectural feature of San Francisco’s early houses. Twisting incrementally over the height of the tower, the bay windows offer ample views, light, and air and inform the building’s distinctive form and texture—the result of special attention to the building’s energy performance as well as how it is experienced. The tower meets the ground at a pleasant, human scale and offers retail space fronting Folsom and Main Streets, contributing new pedestrian amenities to a highly walkable area of the city with excellent transportation connections.” The project is designed to meet LEED Gold standards for sustainable design and energy efficiency.