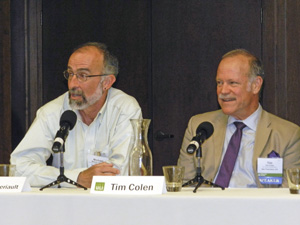 On June 3, Proposition B passed, which could lead to fewer jobs and less housing. Michael Theriault spoke against Prop B at an Urban Land Institute forum in May. To his left is Tim Colen, Executive Director, San Francisco Housing Action Coalition.

Getting a building constructed along San Francisco’s waterfront just got a lot harder.
Proposition B, the measure to limit heights along the waterfront by mandating voter approval of every project that exceeds current limits, passed with 59 percent of the vote. The Building Trades, affordable housing advocates and supporters of the planning process decried the measure as an example of ballot box planning that reduces complex land use issues to simplistic election slogans. Limiting heights and density will mean less construction jobs and less housing.

“The vote on Prop B guarantees that San Francisco will continue on the path to be the least affordable city in the U.S.,” said Tim Colen, Executive Director, San Francisco Housing Action Coalition. “It eliminates a significant amount of housing that was planned for the waterfront area. It means the city will build less housing, less affordable housing, and there will be less funding for affordable housing” from developer fees.

Colen pointed out that the existing planning and approval process is public and transparent. With Prop B, political campaign consultants and funders will have more influence. “It increases the level of politics by giving voters the power to stop projects that go through a planning process that now involve planners and the community,” he said.
San Francisco Building and Construction Trades Council Secretary-Treasurer Mike Theriault expressed frustration with the election results.

“It’s not a good thing that when San Francisco is experiencing a housing crisis, we will reduce the amount of housing that will be built,” Theriault said. “Some projects will be smaller, with less housing, fewer units, but the folks who are flooding the City will still move here and displace more working class people. It makes it harder for our members to be able to afford to live in the City. The folks who backed Prop B do not care about the working class.”

Theriault pointed out that the small coalition fighting Prop B was able to cut down the margin of support for the measure from about 75 percent.

“The No on B campaign was able to move more voters to our side,” he said. “Polls showed Prop B leading by a three to one margin, but we knocked down Prop B’s margin of victory. The No on B campaign spent one-third of what was spent by Prop B supporters – they are the folks with the money.”

While members of the Building Trades and the San Francisco Democratic Party did work the phones to try to defeat Prop B, some potential allies stayed neutral or backed the measure.

“Unfortunately, developers ducked and ran and politicians ducked and ran or supported Prop B,” Theriault said. “We had a small coalition and managed to make some gains.”
Theriault, Colen and land use activist Corrine Woods had filed a lawsuit before the June Primary to keep Prop B off the ballot. Theriault and Colen said there are currently no plans to try to overturn Prop B, but that they would wait to see what the State Lands Commission would do.

David Chiu Tops Campos
in Round One

San Francisco Supervisor David Chiu was the top vote getter for the Assembly District 17 race June 3, winning 48 percent of the vote. Supervisor David Campos received 43 percent and the two will face off in the November general election.
Under the new primary election system, the top two candidates in the primary advance to the general election, regardless of party affiliation. Chiu and Campos are both Democrats.

Mike Theriault of the SFBCTC said that the Building Trades had endorsed Chiu, and will continue to work to get him elected, because he has supported good union projects. Theriualt added that when the Board was voting to approve the development of the Hunters Point Naval Shipyard, Campos and others put forward amendments that would have killed the project – even after a good community benefits agreement had been worked out. Theriault noted that Chiu was the swing vote to OK the project that will create good union construction jobs.

“David Chiu’s vote allowed us to go to work and allowed middle class and working class people to be able to live in the city,” Theriault said.

On election night, Chiu told supporters he was pleased with the results.

“San Francisco voters said that leadership that brings folks together is the leadership they want,” he said. “They said they want unity over division, that they want positivity over negativity, they want people who are getting things done.”

Measure A passed with more than 78 percent of voters backing the measure that will raise $400 million to modernize and make seismically sound Police and Fire facilities.
Measure A will provide $30 million in funding for renovation or replacement of district police stations, $85 million for upgrading neighborhood fire stations, and $55 million for upgrading the city’s emergency firefighting water system. The remainder of the funds will go to moving the crime lab, medical examiner’s office and motorcycle police headquarters to more seismically safe buildings.