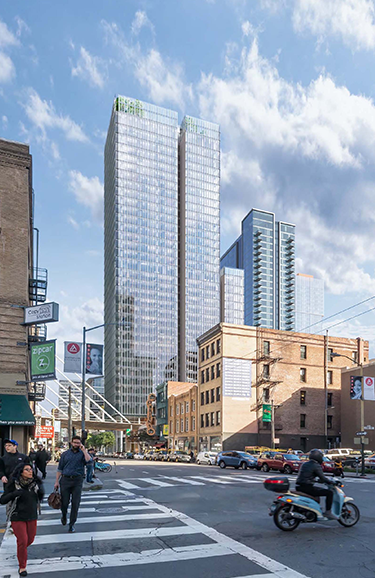 The façade of 555 Howard will feature a double curtain wall on the west side of the building for energy efficiency and acoustics. Rendering Courtesy Steelblue

The San Francisco Planning Commission unanimously approved the 36-story, mixed-use, 385-foot tall high-rise tower proposed for 555 Howard Street at its March 2 meeting. The project by developers SKS Investments and Pacific Eagle involves the removal of three buildings and the new construction of approximately 437,251 gross square feet in size. The building would include 69 condominiums over a 255-room hotel, with a publicly accessible bar and adjacent open space on the top floor.

Representatives of the developers gave a presentation to union Business Representatives at the San Francisco Building and Construction Trades Council meeting on Feb. 28. Dan Kingsley of SKS said the project would be “a 100 percent union project, as all of our projects are.” He said SKS is working with union general contractor Swinerton on pre-construction. They hope to break ground toward the end of 2017.

Hong Kong-based Pacific Eagle owns hotels and office and residential developments in San Francisco. The developer is completing construction on the 100-unit Austin condo project at 1545 Pine St. and plans a 150-room hotel at 1125 Market St. SKS has many projects in San Francisco, including 888 and 274 Brannan Street, and 409–499 Illinois St.

Steve Shanks of Pacific Eagle said the building, designed by renowned architects from the Renzo Piano firm and local architect Mark Cavagnero Associates, would be cast in place concrete with shear walls and a concrete mat. He said it was “pretty standard construction” but would feature an all-glass façade with a double curtain wall on the west side of the building for energy efficiency and acoustics, as it will be next to an elevated roadway for transbay busses. Shanks said the project would seek LEED Platinum certification with green building features, and may integrate solar thermal into the façade. The design of the building made a strong impression on Planning Commissioners.

Planning Commissioner Kathrin Moore praised the design and use of glass.

“We have not seen a double skinned façade in this country,” Moore said, adding that the same team of architects worked on the Academy of Sciences building, “and that speaks to how it can work.”

Commissioner Joel Koppel said, “SKS has been turning out amazing projects in San Francisco. I was impressed to see the letter of support from the Building Trades Council and Hotel Workers union. Not only is this project going to employ San Francisco residents and pay high wages to skilled and trained workers during the construction for a couple of years, but also permanent jobs once the building is done. I’m impressed with the plan to meet LEED Platinum – it is not done easily and is rare in new construction.”

There will be approximately 700 jobs over the two years of construction on the project, and 300 permanent jobs at the hotel.

Total condo units to be built

Commissioner Rodney Fong said 555 Howard would be good for the neighborhood, and “will add to the cultural district.”

During the public comment period, Linda Harrison of the Museum of the African Diaspora, located in the Yerba Buena Cultural Arts District and near 555 Howard, said, “There is a sensibility to art and culture in the district and a commitment to affordable housing. We had discussions about how the one percent arts fee will be used for cultural institutions in the neighborhood.” She said the development team also made a commitment to making the public space accessible to public.

“There is a need to ensure we build housing that is affordable to meet needs of service sector workers and to create living wage jobs, which this project does,” Lewis said. “The developer signed an organizing agreement that ensures workers at this hotel will raise the standards for hotels in this city. This hotel is right for this site.”

Carpenters 22 Field Representative Carlos Duran added, “We look forward to working with the development team with a signatory general contractor on this great looking building.”

The project will include 10 below market rate units, meeting the 15 percent inclusionary requirements in the Transbay Transit District. A Pacific Eagle representative said the developer is working on a way to make the to make the home owners association fees affordable for the BMR condo owners. The project also includes 70 off-street parking spaces and 95 Class I and 25 Class 2 bicycle parking spaces.