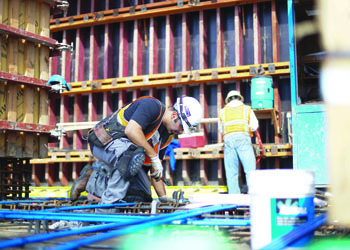 The 45 Lansing project in San Francisco’s Rincon Hill neighborhood is a 320-unit condominium project being built with 100 percent union labor under terms of the Union Labor Life Insurance Company’s “J for Jobs” program.

The new residential tower at 45 Lansing is rising up to take its place in the San Francisco skyline in the Rincon Hill neighborhood. The all-union crew has completed concrete pouring up through the tenth floor and is moving up in phases. Alex Meyers, Project Manager at 45 Lansing for the Build Group, said the work is going well and the project is on schedule for completion by December 2015.

Meyers said as the concrete is poured and the building rises, MEC crews follow close behind. Glass curtain wall exterior finish and high-end interior finishes are being installed throughout the residential units as the tower goes up. Subcontractors on the project include Pacific Structures, Alamillo Rebar doing the iron work, Critchfield Mechanical, Inc. for the HVAC and Cupertino Electric.

Construction began in April 2013, with a small crew of Operating Engineers, Carpenters and Laborers doing excavation and shoring. In early October 2013, the foundation was poured with 366 trucks carrying 3,294 cubic yards of concrete. The San Francisco Business Times reported that San Francisco-based contractor Build Group recently completed a 21-hour mat pour for the tower, designed by HKS. The Business Times added that more than 120 people were on site for the pour.

One challenge for the contractor and crews is the tight constraints of a small, 100 by 150 foot site between Lansing and Harrison streets. Lansing is a small street with limited access for trucks, so Harrison is the main street for staging deliveries and concrete pours. Several other projects are under construction nearby, including the second Rincon Hill tower at Harrison and Fremont streets, and two projects on Fremont. Other challenges include the fractured rock foundation, perched water on-site, and the tightly scheduled phased staging and logistics.

The 320-unit condominium project is being built with 100 percent union labor, under terms of the “J for Jobs” program of the Union Labor Life Insurance Company (ULLICO). Ed Smith, a retired Laborer and Laborers union official who now serves as ULLICO President and CEO, said the 45 Lansing development is one of 51 projects the company has funded in San Francisco, and that he is happy that the $35 million investment in 45 Lansing will put union pensions and members to work.

ULLICO’s “J for Jobs” program is the oldest union funded program for investing in job creation.

Florida-based developer Crescent Heights purchased the property in the Rincon Hill neighborhood between First and Essex streets just north of Harrison for $13 million in 2010 from Turnberry Associates, which had paid $30 million for the property in 2006. The condo tower has been in the planning stages since 2006

The San Francisco Planning Commission voted to approve the 40-story tower condominium project and increase the number of units from 227 to 320 in April 2011. San Francisco Building Trades Council Secretary-Treasurer Mike Theriault was one of several speakers in support of the project. Approval of the 45 Lansing Street project also included an increase in the number of affordable units.