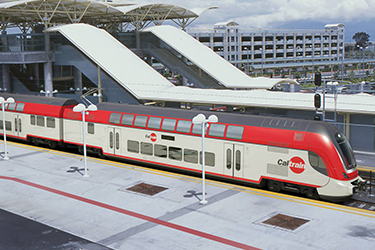 More than 9,600 jobs may be at risk should the Federal Government deny $647 million for the PCEP. Image Courtesy of Caltrain

The Federal Transit Administration (FTA) notified Caltrain on Feb. 17 that a decision on a $647 million federal grant for the Peninsula Corridor Electrification Project (PCEP) would be deferred until the Trump Administration develops its 2018 fiscal year budget. The project would convert the Caltrain rail corridor to an electric rail line from the 4th and King Station in San Francisco to the Tamien Station in San Jose.

“The contracts that have been awarded to complete the PCEP require that a Notice to Proceed be issued prior to March 1,” Caltrain said in a press release. “Deferral of the decision to execute the FFGA will prevent Caltrain from issuing the notice by this date and may jeopardize the viability of the project itself.”

On Feb. 27, Caltrain announced that it had negotiated an extension of the deadline for contractors to begin construction of the PCEP to June 30 while the agency awaits a decision from the FTA about the $647 million funding agreement.

“Buying additional time from the contractors will likely require the utilization of up to $20 million in project contingency that otherwise would have been available for construction related expenses in the future,” Caltrain stated.

Ironically, the deferment of the federal grant came in response to a letter from a group of California Republican Congressmembers claiming to be concerned about cost overruns for high speed rail, led by House majority leader Kevin McCarthy, a longtime opponent of high speed rail. Pulling the federal grant was also seen as a move by Trump to punish California and the Bay Area for its support of sanctuary for undocumented immigrants.

“I never imagined that the electrification of a train would be subjected to such brutal, partisan politics,” said Congresswoman Anna Eshoo, who represents the southern San Francisco Peninsula. “This is not a Democratic project nor is it a Republican project. It is about the modernization of an outdated commuter system that is the spine of the transportation system of the Peninsula and the Silicon Valley region. This project has met every requirement of the Department of Transportation including planning, environmental approval, broad community support and strong local funding, including citizens taxing themselves. The only requirement it didn’t meet was a political one.

Grant dollars, in millions, at risk for the PCEP

Number of jobs at risk

“The electrification of Caltrain is a shovel-ready project which would create thousands of jobs in the Bay Area and employ thousands in other states,” Eshoo continued. “It would be built by American workers and built with American products. I’m currently exploring options to get federal funding for the project.”

“Caltrain is the backbone of the Silicon Valley transportation system and this decision to delay would threaten to break the backbone of this economy,” Speier said. “To make America great again, the President should order that this grant be made and then join us to turn dirt as 9,600 good American jobs related to this project – spread over thirteen states – are created.”

According to Caltrain, “Federal investment in this project will help create over 9,600 jobs in the Bay Area and spread throughout the nation in places like Salt Lake City, UT; Jacksonville, FL; Richmond, VA; Hudson, WI; Littleton, CO and more.”

The jobs include not just construction but designing and manufacturing high-performance electric commuter rail trains. Manufacturers from Florida to Texas would be used to supply parts for the new infrastructure and electric trains. In Utah, the PCEP is the driving force behind plans to build a new railcar assembly plant that will create new employment opportunities to over 550 workers. Electrification of the Caltrain Corridor would create over $2.5 billion in economic value, according to a 2012 report by the Bay Area Council, and address traffic gridlock that hurts the region’s economy.

Caltrain, which has seen its ridership doubled since 2005, has already secured all the local, regional, and state funding and some federal funds for the project. The loss of the $647 million from the FTA Core Capacity program could kill the project, and set back efforts to complete construction of high-speed rail from Los Angeles to San Francisco through the Peninsula.

Along with creating thousands of jobs, electrification of Caltrain would also reduce noise and pollution and could result in increased property values, with the resulting increase in property tax revenue benefiting local governments.

The Trump Administration outlined its 2018 budget in late February, with full details expected to be released in mid-March. It proposes a massive increase in military spending with extreme cuts to public services and federal agencies, along with tax cuts for the wealthy. Democratic Leader Nancy Pelosi called Trump’s budget blueprint “a prescription for America’s decline. Ransacking America’s investments in jobs and working families will make our nation weaker, not stronger. A $54 billion cut will do far-reaching and long-lasting damage to our ability to meet the needs of the American people and win the jobs of the future. The President is surrendering America’s leadership in innovation, education, science and clean energy. President Trump has decided to put Wall Street first while abandoning working families.”