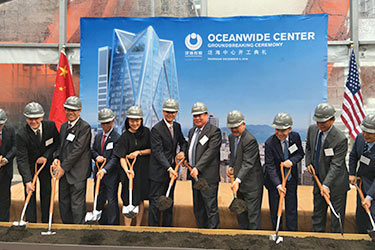 Project to Include the Second Tallest Building in San Francisco

A press release from the contractors noted that, "The pair of towers will be one of the largest and most complex construction projects in the history of San Francisco and will change the city's skyline."

A 625-foot tower at 519 Mission will be the site for the hotel, with an adjacent 910-foot-tall tower the site for residences. Oceanwide Center's tallest tower will be the second tallest in San Francisco, eclipsed only by the nearby 1,070-foot Salesforce Tower. One-third of all the residential units will be below market rate.

Mayor Lee said Oceanwide would be making "a $44 million contribution in housing to make sure that people within the mile can benefit from this actual project." He praised Oceanwide for "creating a foundation for a very strong relationship between the company that is well respected in China and now is going to be, because of these contributions, well respected right here in San Francisco and all across our country." Lee said the partnership would benefit thousands of people for generations to come and called the project "a fine example of urban development and design and environmental contributions."

Oceanwide Holdings president Xiaosheng Han said, "Our vision for real estate development is creating a new urban life. San Francisco has enjoyed strong economic growth in recent years and has great potential to continue attracting investment from all over the world. The groundbreaking ceremony today is a symbolic step that represents our confidence and inspiration for the city of San Francisco." Founded in 1985, Oceanwide has operations in major cities in Mainland China, Hong Kong, Australia, Indonesia and the U.S.

"Our goal is to create high-quality mixed-use real estate in downtown and establish our brand," Han said. "We dedicate nearly half of our site to public open space. We also restored buildings that are over 100 years old – helping conserve the city's architectural heritage. Oceanwide Center aims to achieve LEED platinum certification for the first tower and gold certification for the Mission tower."

Luo Linquan, the Chinese Consul General to San Francisco, called the development "a good model for the city's prosperity and relationship with China." He noted that bilateral trade between the U.S. and China has reached $558 billion, as China overtook Canada as the largest trading partner of the United States in 2015. "Chinese companies invested $8.4 billion in the U.S. – up by 60 percent from 2014," Linquan said. For 2016, "Investment in China by U.S. companies increased by 79.8 percent, while investment in the U.S. by Chinese companies increased by 173.9 percent. Those figures demonstrate that businessmen are confident with our countries' markets."

Supervisor Kim said when she became Supervisor in 2010, the City was in the midst of the recession and "we had seen the slowest rate of construction and development at the city at that time. We were excited to have the groundbreaking of the Transbay Terminal, where for the first time, many construction workers were finally going back to work." At the time, public works projects, including those funded by President Obama's American Reinvestment and Recovery Act, helped reduce unemployment among construction workers, as bailed-out banks failed to invest in private developments.

Kim said that the last six years had seen some of the fastest growth in San Francisco's history. "Every day I'm driving through San Francisco, walking through, and seeing the skyline; it is outstanding how much this neighborhood is changing, and how we are finally bringing the promise of jobs, housing, affordable housing, parks and open space to reality," she said.

Kim added that the developer came to her office and said they were committed to including 33 percent affordable housing on-site, which would help meet the goals of ensuring that 35 percent of housing in the Transbay neighborhood is affordable to working class and middle class families.

Architect Jeff Heller of Heller Manus called the project a sign that the city had "realized that true sustainability means high-density development around transit. The heights and densities and the linkage of that to the Transbay Terminal became the core piece of making this all possible. That was the only path by which this could have happened because San Francisco changed from a local provincial pretty tourist city to a global city. The global city also became the piece that drove this and this process to where we are today."

Foster + Partners partner Stefan Behling said the developer was, "100 percent behind creating an energy conscious and sustainable building. [LEED] Platinum rating for a super tower is actually not that easy to achieve." The towers will also seek LEED certification through energy efficient systems like onsite water collection and re-use, microturbines for heat and power, natural ventilation, natural lighting, and recycling within the building.

"It will use 30 percent less material than other towers, which makes it a lighter tower which ultimately, in this city where you all know the ground conditions are not the greatest in the world for towers, is very important," Behling said. He said the piles for this tower will be, "the deepest foundation piles on the West Coast, 400 feet, all the way to bedrock."

Swinerton CEO Jeff said he is "very excited and honored to be part of the Oceanwide project team." He said Webcor and Swinerton are each building projects in the Transbay Transit District, which Hoopes said "will change the way people live and work in San Francisco. It is more than just about the buildings here. It's a huge civic obligation and this project provides the funds to revitalize our neighborhoods—for art, for parks, and most importantly, as Supervisor Kim said, for affordable housing which we sorely lack in the city. This project will bring a huge opportunity for us to fulfill our civic duties and continue to make and contribute to strengthen San Francisco as a world-class city."

Oceanwide is scheduled to be completed in 2021.