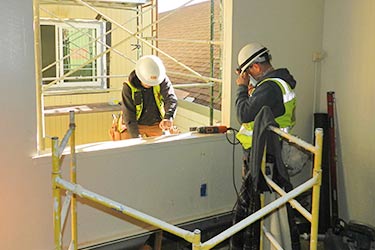 Union construction crews were busy making improvements to 345 Arguello as part of Project Labor Agreement between the Building Trades and the San Francisco Housing Authority. - Photo by Paul Burton

Union construction crews are continuing the work of rehabbing and modernizing public housing for several non-profit housing developers in San Francisco. Some Phase I projects are nearing completion as Phase II projects are set to start. Work is being done under terms of a project labor agreement between the San Francisco Housing Authority (SFHA) and the San Francisco Building and Construction Trades Council (SFBCTC). While the PLA is with the SF Housing Authority, work will be done for non-profit housing developers who now own and manage the properties.

In March 2015, the City reached an agreement with the federal Housing and Urban Development (HUD) agency to fund rehabilitation work on up to 4,584 public housing units and transfer ownership of the properties to the non-profit housing developers. They are now in the process of completing over $700 million in deferred repair and capital needs, and "stabilizing residents' tenancies with professional management and support services, and preserving the units as decent and affordable housing for the City's most vulnerable residents, including seniors, disabled people, and families," according to the Mayor's office. The first phase of rehabilitation work on 1,425 units began in November 2015 and will continue through April 2017. Phase 2 will see 2,066 units get repairs, to be completed by December 2017.

Norman Fong, director of the Chinatown Community Development Center, told Organized Labor the PLA is a good thing for all parties and thanked the building trades for being sensitive to the needs of the residents who are impacted by the construction. He said the CCDC is working with Cahill and other union contractors.

CCDC's Rental Assistance Demonstration Program (RAD) strategist Amy Beinart said she is glad that a PLA was worked out and that it "makes everything very clear and makes a big difference" in ensuring the work is done on time and to high standards. She said CCDC typically uses union contractors. Beinart said CCDC is still working on Phase I projects as the larger Phase II projects get started, with four properties totalling 576 units. They will be modernized and upgraded for ADA compliance, seismic safety and energy efficiency. She said housing retention is a major goal of the modernization work and that improving the buildings and providing services to tenants, "makes housing more stable for them." Beinart said maintenance of public housing has been significantly under-funded for many years due to federal budget cuts. "The RAD program is designed to properly fund public housing and bring it back into the community," she said. "It recognizes that public housing is part of the city."

Organized Labor visited two sites managed by Mercy Housing in early December, the senior apartment buildings at 345 Arguello and 1880 Pine, where union contractor Nibbi Brothers is the General Contractor. Mercy Housing's Project Assistant Nick Quaglia said working with union contractors and union labor has been "awesome" and that, "the workmanship is done to a high standard." He said Mercy had worked with Nibbi, and its Superintendent Brian Burke, on the 345 Arguello project on earlier projects, including the St. Anthony's building.

Burke said work on the 69-unit, five story apartment building is being done in phases and sub-phases, with the project scheduled to be done by March 2017. He said work on the project is "a delicate dance" as crews coordinate work with Mercy Housing's services team in the building that remains occupied. Some tenants are temporarily relocated during the construction. Work includes a full modernization of the building built in the 1960s, including seismic upgrades and making the building and apartment units more accessible for disabled seniors. Structural strengthening of the building includes new shear walls from the ground floor up. Old decks on upper floor apartments were replaced with new decks with light-weight metal railings.

Several apartments will become fully accessible to meet the requirements of the Americans with Disabilities Act and the Mayor's Office of Disability. Burke said some of the old bathrooms would be gutted and rebuilt, getting wider doors and updated bathroom fixtures and rails for wheelchair access.

Crews of laborers have completed most of the abatement including removing old drywall taping mud and some flooring material that contain asbestos. Other improvements include new fire sprinklers, roof, laundry room, electrical switching systems and elevator, and high speed Internet access in common areas.

Mercy Housing's Quaglia said the building would be Green Point Rated for energy use. New energy-efficient boilers, LED lighting, and new windows have been installed as part of the modernization work.

There are currently around 30 building trades union workers on the project. Union subcontractors include Breyer Electric, Cosco Fire Protection for new sprinklers, Bal-Aire for sheet metal, Magnum Painting, Denham Drywall, House Construction for cabinetry, Delta Bay Waterproofing and DLI Mechanical for the boilers. Burke said many of the same subcontractors are working on other Nibbi projects for the public housing projects, including Mercy Housing's 1880 Pine Street project. He said Nibbi also uses some of the same suppliers for each project, and maintains a warehouse in Hayward where windows, cabinets, and fixtures are stored before being brought to the jobsite. "It makes it more fluid to be able to store things like cabinets a month ahead of time in out warehouse," he said.

Burke said he has been a member of Carpenters Local 22 for 36 years, and he had worked on remodeling the Union Hall of Third Street. He said he enjoyed doing the public housing rehab work. "I want to help improve the quality of life for seniors in their golden years, and help them be able to stay where the rent is affordable," he said. Quaglia commented that some studies have shown "when you put a senior citizen in a more positive environment, they live longer" and the improvements in the living conditions for the seniors would be beneficial. Mercy Housing also provides direct services to the residents of the public housing that had been neglected for years due to underfunding of the SFHA.

Mercy's rehab work at 1880 Pine includes some of the same work as at 345 Arguello, with new flooring, mechanical systems, thermal windows, ADA upgrades, and new lighting, along with some of the same challenges coordinating the phases in an occupied building. Nibbi Brothers' Senior Superintendent Mel Miller said the project is going well, with work proceeding from the top floor to the ground floor of the 113-unit senior apartment building 12 units at a time. He said there is a six to seven week turnaround for each floor.

Miller, also an active member of Carpenters Local 22, said the concrete building built in 1973 is seismically sound and well built. He said it is getting some seismic upgrades including collector struts and straps and fiber-reinforced polystyrene to strengthen the concrete walls. Crews of laborers with CPM are continuing abatement work removing old fireproofing and other hazardous materials.

The project is on schedule for completion by the spring of 2017.

Mercy Housing is beginning work on Phase II of the SFHA upgrades.

Organized Labor will feature more of the SFHA projects in future issues.