Bay Restoration to be Done Under PLA 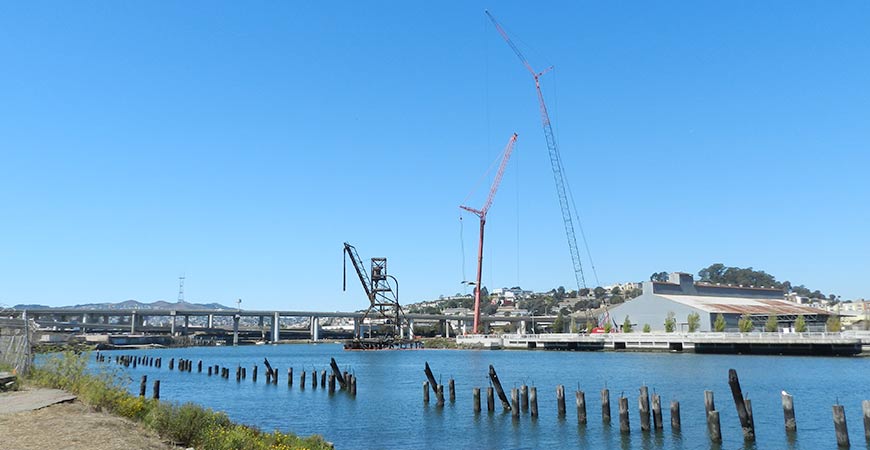 Work done under terms of a PLA include design and construction of shoreline improvements to support habitat creation, protect against erosion and remove creosote piles along Islaia Creek. - Photo by Paul Burton

$500 Million to be Raised Via Measure AA

The San Francisco Bay Restoration Authority's (SFBRA) Governing Board voted November 30 to require that work on San Francisco Bay restoration projects costing $500,000 and above will be done under terms of a Project Labor Agreement with Bay Area Building Trades Councils. The SFBRA is a regional government agency created by the California Legislature in 2008 charged with "raising and allocating resources for the restoration, enhancement, protection, and enjoyment of wetlands and wildlife habitat in San Francisco Bay and along its shoreline, and associated flood management and public access infrastructure." Its Governing Board is comprised of local elected officials from Bay Area counties.

In June of this year, voters in all nine Bay Area counties approved Regional Measure AA, which will fund restoration of wetlands throughout the Bay Area through a $12 annual parcel tax. The tax will raise $25 million per year ($500 million over 20 years) —"enough to build 20 miles of new levees and restore an estimated 15,000 acres of wetlands," according to the SFBRA.

The SFBRA notes that, "Restoring San Francisco Bay is not just essential from an environmental or quality of life perspective. It is equally important to provide communities with coastal flood protection, expand bicycle and walking trails on public land, and to continue to strengthen our local economy with new jobs. Restoration projects that have been completed around the Bay have already created hundreds of full and part time jobs."

Projects completed include restoration of former salt ponds at the Green Island Unit in southern Napa that created over 50 full- and part-time positions between 2007 and 2008.

"Wetland restoration projects create jobs from project planning through implementation: building flood levees, transporting sediment, growing and outplanting native plants, constructing new bicycle and walking paths, as well as designing projects before they are built, and maintaining and monitoring sites into the future," according to the SFBRA.

The staff report supporting a PLA noted that, "It is in the Authority's interest to fund projects that are high-quality projects built with a properly trained workforce and completed in a timely manner. It is also in the Authority's interest that the numerous jobs created due to passage of Measure AA are safe, good-paying jobs that include training opportunities and other benefits to the region's workforce. The use of project labor agreements can help achieve these goals. A PLA provides assurances for workers regarding job conditions and assurances for project owners on timely completion. A 2010 study by the Economic Policy Institute found that 'PLAs help to assure timely completion by keeping projects free from disruptions resulting from local labor disputes, grievances, or jurisdictional issues.'"

San Francisco Building and Construction Trades Council Secretary-Treasurer Michael Theriault said that the SFBCTC would work with the Board to craft PLA language based on other successful PLAs and that the PLA would provide opportunities for skilled workers and apprentices trained through the building trades apprenticeship programs.

The PLA Resolution states that the PLA "must cover all work within the craft jurisdictions of the local unions (e.g., construction, remediation, demolition, alteration, installation, improvement, and repair)." The resolution calls for the terms of the proposed PLA to include a prohibition on strikes and lockouts, a dispute resolution mechanism for all conflicts, use of union hiring halls, use of apprentices, and that the wages, benefits and working conditions of the craft employees must be governed by the applicable Union Master Labor Agreement.

Theriault said the PLA got strong support from Board members Scott Wiener and Dave Pine.

"Particularly with the anti-worker Trump administration coming into power, now more than ever California and the Bay Area must stand with working people," said Wiener, a member of the San Francisco Board of Supervisors who was recently elected to the State Senate. "PLAs are a key tool to help workers afford to live here, raise their families here, and thrive. I'm proud that the Bay Restoration Authority took this step."

Pine, Chair of the SFBRA's Board and a San Mateo County Supervisor, advocated for a PLA in the San Mateo Union High School District in 2009 when he served as a school board member. He said that PLA had delivered hundreds of millions of dollars in improvements for the school district and had "won over all the doubters."

"It is important to have a PLA so that the benefits of a green economy will not only help the environment but also help the local workforce," Pine said. "My experience with PLAs is they deliver projects of high quality that are completed on time and in a way that puts a priority on worker safety."

The Restoration Authority proposes to fund projects based on their "positive impact on the Bay as a whole, in terms of clean water, wildlife habitat and beneficial use to Bay Area residents." Projects will also be prioritized based on their benefit the economy and job creation. They will also provide opportunities for local organizations and businesses to engage youth and young adults and assist them in gaining skills related to natural resource protection.

Some building trades union members are already learning natural resource and watershed restoration skills through innovative programs and specific trainings for jobs on projects for the San Francisco Public Utilities Commission's Water System Improvement Project (WSIP). The WSIP has employed hundreds of building trades union journeymen and apprentices under terms of a PLA, which has been extended for the SFPUC's Sewer System Improvement Project.

Measure AA will fund many projects around the San Francisco Bay, including several in San Francisco from Crissy Field to Pier 94. They include:

Many more restoration projects will be done in each of the nine Bay Area counties.