Election 2016: Victories for the Trades 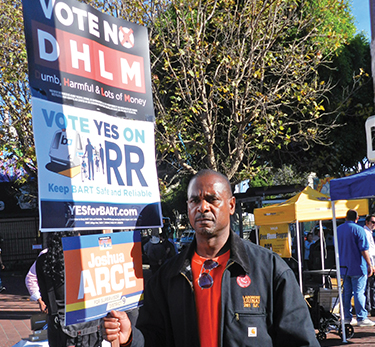 Laborers Local 261’s Donell Miller holds up a sign supporting Josh Arce for Board of Supervisors and Measure RRR at 24th and Mission streets. Arce, the Community Liaison for Laborers Union Local 261, finished in second place in District 9. Measure RR, a region-wide $3.5 billion bond measure that will fund improvements to the BART system, was passing comfortably.

In an election that saw a right wing business tycoon thought to be unqualified to be president actually win the highest office in the land and the Democrats fail to gain enough seats in Congress to gain control of either the House of Representatives or the Senate, there were a few bright spots and victories at the local and state level.

Former San Francisco District Attorney Kamala Harris was elected to replace Barbara Boxer in the Senate. In a passionate victory speech, Harris pledged that she intends to fight for the rights of workers to collectively bargain, for women’s rights and health care, and against climate change deniers and opponents of the diversity and inclusiveness that makes California strong.

Voters in San Francisco overwhelmingly backed Hillary Clinton for president, by a margin of 85 percent to less than 10 percent for Donald Trump. While Clinton won California handily and won the popular vote nationwide, she lost in key states where Trump exploited workers’ anger over job losses due to trade deals and a Democratic administration that has not done enough to create jobs. Clinton failed to make the case to working class voters that she would be better for their economic interests than Trump and his anti-union Vice President Mike Pence.

San Francisco voters also voted with the Building Trades on important statewide ballot measures. Proposition 51, the California Public Education Facilities Bond, passed statewide with 54 percent of the vote; it received 67 percent in San Francisco. The $9 billion bond will be a significant step forward to address the state’s school construction needs. Prop 53, which would have undermined local control of how infrastructure projects are funded and developed by requiring a statewide vote for some local projects, was losing statewide by a 51 to 49 percent margin as Organized Labor went to press. It lost by a 70 to 30 percent margin in San Francisco. The State Building and Construction Trades Council campaigned strongly against the measure, with a successful media campaign featuring firefighters, nurses and Gov. Jerry Brown. Prop 55 also passed, and will maintain a tax on upper income Californians to help fund public education and prevent cuts to jobs and programs.

The San Francisco Unified School District’s $744.25 million bond measure, Prop. A, passed with an 80 percent “yes” vote. It will fund the completion of seismic safety and modernization projects and new school construction, building on the bonds passed in 2003, 2006, and 2011 that have funded modernization of over 150 school sites. Work done for the 2006 and 2011 bonds has been done under a project labor agreement. San Francisco Building and Construction Trades Council Secretary-Treasurer Mike Theriault said the District is pleased with the work done under the PLA and is supportive of extending it.

The City College of San Francisco Parcel Tax measure, Prop B, also passed with 80 percent of the vote. It increases the $79 parcel tax passed in 2012 to $99 per parcel, and extended it beyond the 2020 expiration date to 2031. The tax revenue will offset State budget cuts to help maintain essential courses at CCSF campuses and prevent layoffs.

Other local measures endorsed by the Building Trades which passed include Prop C, which will expand how loans for seismic upgrades can be used to rehab and convert properties to affordable housing; Prop E, which transfers responsibility for the maintenance of street trees from homeowners back to the City; and Prop G, to create a Department of Police Accountability. Prop O also passed, exempting the Candlestick/Hunters Point project area from the 950,000 square feet of office space limit set by Prop. M in 1986. It would shorten development time and accelerate job creation in construction and businesses that would serve the project area under development by Lennar Corporation. The Real Estate Transfer Tax measure, Prop W, passed and will increase the real property transfer tax rates on high-end property sales to generate funds for the City.

As Organized Labor went to press, Measure RR was passing with 70 percent of the vote. The region-wide $3.5 billion bond measure would fund improvements to the BART system. A cumulative two-thirds vote in San Francisco, Alameda and Contra Costa counties is required for passage. San Franciscans voted for Measure RR by an 81 to 19 percent margin. The Building Trades and BART have a project labor agreement in place for the BART system projects.

San Francisco voters rejected ballot measures D, H, L and M, which were designed to undermine the Mayor’s ability to make appointments. Prop. D, which would have limited the mayor’s power to fill vacancies on the Board of Supervisors, lost by a 53 to 47 percent margin.

With the defeat of Prop. D, Mayor Ed Lee will be able to choose a successor to Supervisor Scott Wiener, who won election to the State Senate over Jane Kim.

Voters also rejected Prop H, which would have created a new office of Public Advocate with authority to review the administration of City programs and remove the mayor’s direct oversight of the city’s housing and economic development departments and reduce a mayor’s ability to manage city government. Prop L would have split the power to appoint SFMTA directors between the Mayor and the Board of Supervisors. Prop M would have created a new commission to replace the Mayor’s Office of Housing and the Office of Economic and Workforce Development. The San Francisco Chronicle reported that, “Mayor Lee, speaking at a gathering of local Democrats, said he was gratified by the voters’ decisions. ‘Thanks to everyone in this room for the reasonableness they have to reject (these measures),’ he said.” Voters also rejected Prop P and Prop U, which the Building Trades opposed.

San Franciscans also voted to expand democracy by passing Prop N to allow non-citizens to vote in school board elections and Prop F, which lowers the voting age to 16 for municipal elections.

Board of Supervisors November 2016

Candidates for the Board of Supervisors endorsed by the San Francisco Building and Construction Trades Council won in four of the six districts November 8. Incumbents Aaron Peskin in District 3, London Breed in District 5, and Norman Yee in District 7 were re-elected.

Safai is the former Deputy Director for the Mayor’s Office of Community Development, and worked under Mayors Willie Brown and Gavin Newsom with the San Francisco Housing Authority, the Mayor’s Office of Community Development, and the Department of Public Works. He said during the campaign that his priorities include creating more affordable housing options, keeping neighborhoods safe and clean, supporting local businesses, and revitalizing commercial corridors in the District.

“This was a long, tough campaign,” Safai. “I’m honored to have had the support and friendship of the building trades from the beginning. You walked with us at our campaign kick-off and stood with me on election day; I cannot thank you enough. While there are still lots of votes left to count, we are cautiously optimistic that the results will hold.”

In District 1, Sandra Lee Fewer was ranked third by the Building Trades Council; she defeated the Council’s first and second choices Marjan Philhour and David Lee. On Election Day, Fewer had 39 percent of the vote, with Philhour at 35 percent and Lee at 10 percent among the 10 candidates running. After the ranked choice votes of candidates receiving the least votes were transferred to voters’ second and third choices, Fewer ended up winning with 52 percent. Philhour placed second with 48 percent.

As Organized Labor went to press, San Francisco Supervisor Scott Wiener led Supervisor Jane Kim by a 52.5 to 47.5 percent margin in the race for the District 11 State Senate seat. While tens of thousands of mail-in votes had yet to be counted, the five percent margin looked to be nearly impossible for Kim to overcome. Wiener won in San Francisco as well as in northern San Mateo County.

The day after the election, Wiener issued a statement on Facebook, saying, “Last night was bitter-sweet. With most ballots counted, I have a 5-point lead. We are cautiously optimistic, and I’m deeply grateful to the voters. On the other hand, a man who bragged about sexually assaulting women and who wants to deport 11 million people and withdraw us from NATO was elected President. We must not give up. We will survive this disaster, just as we have done in the past. We will do it with determined progressive leadership. We must unite as a community, reenergize, and fight. This country is worth fighting for. Our community is worth fighting for.”

Wiener told Organized Labor November 10 he remained “cautiously optimistic about our race while saddened by the national results. There are still many votes to be counted and we’re watching closely. I’m deeply grateful for the strong and consistent support I received from the trades. I look forward to working together to support working families.”

Wiener has a strong track record supporting the building trades. He authored legislation to expedite the construction of affordable housing, link transit funding to population growth, and allow new in-law units in existing buildings. He made transit-oriented development a priority, and authored the Subway Master Plan to create a roadmap for citywide subway construction in San Francisco. He also worked on transit impact fee funding for five years and supported the Transportation Sustainability Fee that will generate $44 million annually in new funding for transportation improvements.

He said as State Senator he will focus on addressing the need for more housing through smart and well-planned growth, enhanced funding for affordable housing, increasing investment in transit, and efforts to address the water crisis, climate change, access to health care, public education.