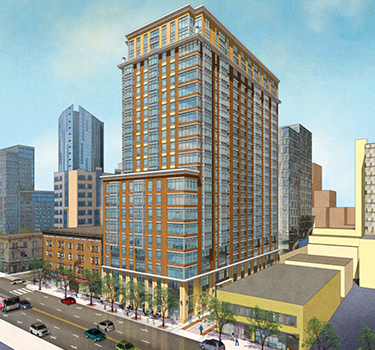 The 21-story building proposed for 1270 Mission will include more than 2,000 quare feet of ground floor retail.

The San Francisco Planning Commission unanimously approved a 21-story building to contain 299 housing units and 2,012 square feet of ground floor retail for a parcel at 1270 Mission Street that’s currently home to a restaurant. If the project, from local developer AGI Avant, receives full approval – including from the Board of Supervisors – the existing one-story, 1,200 square foot building would be demolished to invigorate the area with an influx of new residential and commercial uses.

“It’s a better project for San Francisco in general,” expressed Joel Koppel, San Francisco Planning Commissioner. “The existing uses at the site are a pizza place and a surface parking lot, so housing is going to be a much more desirable use for this plot. The area has become a major corridor for commercial and so it’s good to have a residential component enabling people to live closer to where they work.”

The 200-foot tall building will be situated on the Northwest corner of Mission and Laskie streets. The site carries a Downtown-General Commercial use designation and is subject to the Downtown Area Plan. Housing units will be a combination of studios, one, two and three-bedrooms with at least 21.5 percent to be below market rate. According to Tina Chang, Planning Department project manager, the project significantly exceeds affordable housing requirements as the Proposition C “grandfather clause” allows for a requirement of a minimum of 13.5-percent affordability.

Height in stories of 1270 Mission Street

Percentage of units below market rate

“The project meets the goals and objectives of the General Plan as it replaces an underutilized parcel with new housing that has been designed to be consistent with neighborhood character, and will be providing a number of public benefits, including improved public streetscapes at Laskie,” Chang said.

Since Q4 2014, AGI Avant has held over 15 meetings and public forums with eleven community groups to present and discuss the proposal. The San Francisco Housing Coalition issued a report card giving the project favorable ratings for the categories of land use, affordability, density, community input and urban design.

“They go above and beyond with community outreach and also work with district Supervisors to mitigate any issues that could result in oppositions,” said Koppel. “When the project came to us, everything had already been taken care of and there was a long line of people there to support the project, and no one opposing. The union contractors are going to pay their workers a livable wage with healthcare benefits so those workers can afford to stay in San Francisco.”

According to Brian Baker, vice president of development at AGI Avant, the project is scheduled to go before the Land Use Council on November 14 and then two Board of Supervisors meetings, also in November.