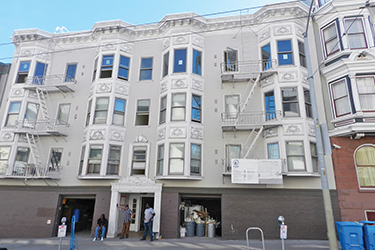 The three-story property at 939 Eddy Street is part of the City’s Rental Assistance Demonstration Program.

Work to be Performed on Public Housing Projects in the City

The San Francisco Building and Construction Trades Council (SFBCTC) has an ongoing Project Labor Agreement with the San Francisco Housing Authority (SFHA) for work on public housing projects in the city.

The Building Trades’ Executive Secretary-Treasurer Mike Theriault said that we are now starting work under the second phase of the agreement with the agency.

“We had one of only two PLAs with a housing authority in the country, and the SFHA has been pleased with how it has worked,” Theriault said. The PLA guarantees that work will be performed union or under union terms and assures the work will be done by skilled workers.

Theriault said while the PLA is with the San Francisco Housing Authority, work will be done for non-profit housing developers who now own and manage the properties. As Organized Labor reported in March 2015, the City reached an agreement with the federal Housing and Urban Development (HUD) agency to fund rehabilitation work on up to 4,584 public housing units and transfer ownership of the properties to the non-profit housing developers. They are now in the process of completing over $700 million in deferred repair and capital needs, and “stabilizing residents’ tenancies with professional management and support services, and preserving the units as decent and affordable housing for the City’s most vulnerable residents, including seniors, disabled people, and families,” according to the Mayor’s office.

Half of the projects transferred ownership in November 2015. The first phase of rehabilitation work on 1,425 units began in November 2015 and will continue through April 2017. Phase 2 will see 2,066 units get repairs, to be completed by December 2017.

The Mayor’s Office announced November 3, 2016 the completion of the transfer of ownership of the second half of the 29 public housing sites with nearly 3,500 units from the SFHA to community-based affordable housing non-profits. Theriault said one condition of the transfer was having a PLA in place.

“Once again San Francisco is at the forefront of creating innovative solutions to make government programs work better and benefit our most vulnerable residents,” said Mayor Lee. “For decades, San Francisco’s public housing has been under-funded, but today we take a significant step towards revitalizing and rebuilding distressed public housing for our extremely low-income families and residents. This milestone marks the end of many months of hard work by the City and our many partners.”

The partnership is part of the Mayor’s 2013 Re-Envisioning Public Housing Plan and the Department of Housing and Urban Development’s Rental Assistance Demonstration Program (RAD). In 2014, led by Mayor Lee, the City and HUD worked together to address the disrepair in the public housing stock as well as the region’s extremely high construction costs. A press release from the Mayor’s office noted that, “By allowing the City to blend two separate kinds of rental subsidies across the portfolio, the City and SFHA, in partnership with eight different community-based, affordable housing development teams, were able to maximize all available financial resources for the project. Bank of America Merrill Lynch (BAML) led the $2.2 billion financing, including $1.06B in tax-exempt construction debt, $331 million in tax-exempt permanent debt, and $816 million in tax credit equity with Aegon. This resulted in one of the country’s largest and most complex RAD financial transactions, which also included BAML working with Freddie Mac and five other participant Banks.”

Olson Lee, Director of the Mayor’s Office of Housing and Community Development, said, “All San Franciscans deserve safe, affordable housing to live in and raise their families. By transferring the ownership and management of San Francisco’s public housing to our community-based partners, we have permanently preserved the affordability of these buildings, giving our most vulnerable residents assurances they can remain in San Francisco.”

In addition to building improvements, properties converting to RAD will, for the first time, have a dedicated funding stream that can provide residents with services and referrals, health and wellness activities, and housing stability. The services are funded through project operations and by a $2.8 million tax-credit equity contribution from Bank of America Merrill Lynch. They include public health nurse visits, support groups, and exercise classes at the senior citizen housing sites and family literacy nights, youth activities, and community gardening programs at family housing sites. Referral to case management, mental health and substance abuse, and other comprehensive services is also available at all sites. The RAD program will also allow tenants to return to their units if they have to move temporarily while their units are rehabbed. Approximately 5,400 low-income San Franciscans live in public housing units.

“Few communities have the will and talent to pull this off, and the rewards will be immense: high quality, well-managed housing for very low income individuals and families, affordable for decades and decades to come,” said Donald Falk, CEO of the Tenderloin Neighborhood Development Corporation. “The complexity and challenges of organizing a billion-plus dollar renovation of a citywide portfolio of buildings highlights the capacity of the San Francisco affordable housing community, including nonprofit developers, city staff, contractors, architects and many others.”