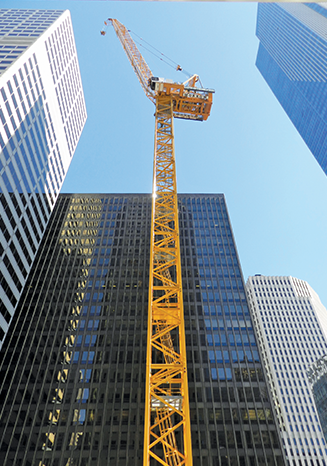 A crane stretches at 350 Mission Street.

San Francisco’s skyline has changed dramatically over the last decade, and construction cranes continue to be a critical part of the changing landscape. As the post-recession construction boom has led to an increase in the number of cranes in operation, there has been no increase in accidents or incidents involving cranes. The safety record of crane operators is a source of pride for Operating Engineers Local 3 and their equipment operator trainers, as well as the organization that certifies crane operators.

The National Commission for the Certification of Crane Operators (NCCCO) was formed in January 1995 as a non-profit organization with a mission to “develop effective performance standards for safe crane operation to assist all segments of general industry and construction.” The NCCCO establishes and administers a nationwide program for the certification of crane operators, and recently announced it had “administered over one million written and practical examinations and issued more than 280,000 certifications in all 50 states, ensuring that a significant portion of crane operators throughout the nation are informed, trained and qualified.” The NCCCO noted in 2008 that California crane fatalities had decreased since crane operator certification requirements took effect in 2005, from 10 in the period from 2002 to 2005 to just two between 2005 and 2008, according to a study published by California’s Division of Occupational Safety and Health.

NCCCO’s Board of Directors includes representatives from construction firms, government regulatory and standards-setting agencies, and labor unions, including the International Union of Operating Engineers (IUOE). It oversees and certifies the crane operator exams conducted by the union.

Albright said he administers exams to journeymen operators looking to upgrade their skills and certifications and keep up with the latest technologies and requirements. The score sheets are sent to NCCCO, which issues the certifications. Albright said the organization also audits the results to make sure the examiners are conducting the test to their standards.

“The aim is to have the applicant take and pass the test and be able to go anywhere to work, since the standards are national,” he said. The test covers four main areas: understanding site conditions, operating the equipment, knowing the load charts and capacity of the crane and knowing the OSHA and American Society of Mechanical Engineers (ASME) regulations.

Crane apprentices have to pass written and hands-on practical exams and complete 8400 hours of on-the-job and classroom training before becoming journeymen. There are different exams and certifications for swing and fixed cab cranes, portable and tower cranes, hydraulic and lattice boom cranes. Classes are also available for journeymen to do upgrade training. McChesney said many crane operators start training on smaller mobile cranes and work their way up to the larger lattice boom cranes and towers.

Albright said one reason Northern California has a better record on crane accidents and safety than some other areas in the country is, “we enforce it – and there are many good union contractors in the Bay Area and workers who are better trained, through union apprenticeship programs.”

Operating Engineers union members also work closely with the other trades, working with ironworkers laborers and truckers who prepare loads, do rigging, signaling and traffic control. Albright said operators and qualified equipment riggers and signalers take part in pre-lift meetings at the jobsite to work out any issues and hazards like overhead power lines, soil conditions and traffic.

“Cranes are unforgiving,” Albright said. “Crane operators have to understand site conditions – what is underneath, such as pipes, tanks, shoring. Crane operators have a responsibility to report any potential hazards or problems with the ground conditions and report them to the contractor. Safety is a result of training and the cooperation of signatory contractors.”

In a press release from 2015, the NCCCO reported “an 80 percent decline in crane-related fatalities where professionally developed certification has been adopted.” NCCCO Chief Executive Officer Graham Brent said the volunteers who founded NCCCO 20 years ago, “believed the solution to reducing the incidents of crane accidents lay in part by establishing effective performance standards for those who work in and around cranes. The result of this vision, determination and sheer hard work was a fair, valid and reliable assessment of crane operator knowledge and skills.” Brent added that employers’ personal experiences with the benefits of CCO certification is a key component of workplace risk mitigation. “CCO certification has been successful for one reason: It works,” he said.

McChesney said good communication between operators and job superintendents is important. He said crane operators are often more informed and aware of codes than an employer might be. They are trained so they can put safety first and if they feel there is a safety issue or are concerned about ground stability, rigging, or other potential hazards, can communicate with the contractor and engineers – with the backing of the union, he said.

Another factor in safety on the job is the evolution of technology and computerized controls. Cranes are now equipped with sensors that monitor the lift weights, radius of the boom and any issues with the crane itself, which are sent automatically to the manufacturer.

McChesney said technology has changed a lot since he started working 30 years ago on small mobile cranes.

“There are lots of safety devices on cranes now,” he said. “The new technology alerts the operator to any problems.” He said the new icon-based app is user friendly. “You can see on screen the weight of a load, and the computer can lock you out if you try to hoist beyond your capacity. Computers are a good aid, but you have to make sure you program it properly and get accurate information about the radius of the boom, weights and angles. You can’t rely on just the computer.” Apprentices and journeyman must also study the manuals and reports published by the ASME that include detailed information about weights of construction materials, proper rigging, and load capacities of tower cranes and mobile cranes. Operating engineers also have to be able to inspect the cranes and report the results to mechanics, McChesney said.

Once certified, crane operators must take an exam every five years to maintain certification and be up to date on laws and regulations. Ongoing training of accredited examiners like Albright also keeps them up to date on rigging, signaling, dealing with hazardous materials, safety codes and technology.

“We always have classes going and are tracking and evaluating to see what they need,” Albright said.

Along with training for safer operation of cranes in the construction industry, the operating engineers also work with FEMA and the federal Department of Homeland Security once or twice annually on trainings for dealing with natural and man-made disasters. The union is partnering with fire fighters and first responders nationally on search and rescue training after natural disasters or terrorist attacks, to lift debris and remove hazardous materials.

For apprentices, the training can provide an opportunity and a career. The union has a list of about 2,000 waiting to get into its apprenticeship program, but continues to recruit future operators through job fairs, career expos, high schools and community-based pre-apprenticeship programs. McChesney said it helps to have pre-apprentices come in who have basic communication skills, are able to show up on time and take pride in their work. “You have to have a good attitude, and take pride in safety,” he said.

Commenting on the decline in fatalities in California, Brent said, “This remarkable decline in crane-related deaths and injuries, and the lives and hardship that have been spared as a result of the implementation of CCO crane operator certification in California, is a tribute to the vision and selfless determination displayed by those volunteers more than a decade ago who are now witnessing their beliefs validated and their dreams realized.”