A Strong Voice on the Public Utilities Commission 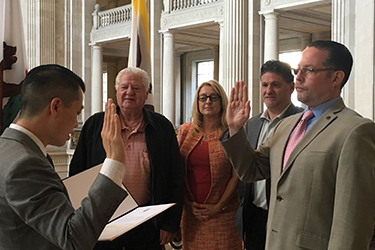 Vince Courtney – LiUNA! Local 261 Recording Secretary, Labor Representative and Political Director – was recently sworn in for a new term at the San Francisco Public Utilities Commission. He has held a post as one of the five PUC commissioners since he was first appointed by then mayor Gavin Newsom in 2010. Mayor Ed Lee reappointed Courtney in 2013 and again this year.

Courtney went to City College of San Francisco, graduated from UC Santa Cruz and earned his law degree in 1999 from San Francisco Law School. He worked for his mother and father’s law firm where they represented the building trades, and in the process he got to know a lot of union affiliates. As a delegate for the San Francisco Building and Construction Trades Council, Courtney knows the people and the world of the trades; he has become well acquainted with the value they bring to the city.

“I’m honored to be identified as a Building Trades Council delegate. I think the tradition is impressive, I think our popularity is unmatched,” Courtney said. “And my thought is as long as I can continue to do right by the Council, the leadership and the affiliates, I think we’re going to continue to be in business and we’re going to expand. I would love to see a lot more of us serving the city and county in this way. We’re actually doing it to better our memberships, the workforce and the men and women that we represent.”

One of his continuing goals is to make sure that San Franciscans understand that the objectives of the world of the building trades and affiliates are beneficial to all. He said he’s prepared to stand firm in his backing of unions and their workers, and that taking the moral and political high ground by emphasizing workforce development leading to career pathways and a prosperous community workforce is not something they should shy away from.

“It’s something that we really have to focus on – making sure that we have sufficient opportunity to weigh in on workforce development proposals, subcontracting and protecting the integrity of what we’ve built in terms of wages, hours and working conditions,” Courtney said. “But we must also concentrate on the individual workers who should be provided an opportunity at the conclusion of those terms to get into a union pre-apprenticeship or apprenticeship program.”

Courtney recognizes that the building trades and the city in general are enjoying a thriving local economy, but notes the future is not without its challenges.

“I think the biggest challenge moving forward is making sure that the PUC has direct access to the most qualified, localized workforce possible when it comes to our industry. And I think that the PUC has to be thoughtful and insightful enough to make sure that we’re thinking long term about how we develop, together with the affiliates, outreach, recruitment and training programs that are transparently and efficiently administered. And that’s how we build the middle class through the local building trades unions.”