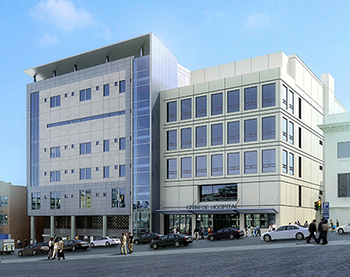 The new $169 million Chinese Hospital replacement project will be adjacent to the hospital’s building that opened in 1979 and is expected to be completed by the Chinese New Year of 2015. - Image courtesy of Chinese Hospital

A new hospital in the heart of Chinatown is being built with an all-union crew. General contractor DPR Construction completed a major concrete pour at the end of December, and Herrick Steel is set to begin erecting steel this month for the Chinese Hospital. Demolition of the original hospital building at 835 Jackson Street built in 1924 began in late 2012.

Oldest Independent Hospital
Chinese Hospital is San Francisco’s oldest independent community hospital and is a unique healthcare provider with a long and rich history of providing access to health care services for the Chinese community. The community-owned, non-profit hospital offers a wide range of medical, surgical and specialty programs. The replacement project will nearly double the current 54-bed hospital’s 73,000 square feet to 141,000 square feet and add a 22-bed skilled nursing unit. The $160 million hospital project is being funded through a capital campaign by the hospital’s board of directors and is expected to be completed by the Chinese New Year of 2015.

The new facility will be adjacent to the hospital’s building that opened in 1979, which is becoming overcrowded. The construction project itself faces the challenge of being in a crowded commercial neighborhood, with heavy vehicle and pedestrian traffic and little room for heavy equipment and trucks. The San Francisco Business Times noted that, “The neighborhood that surrounds the project site is always bustling with activity… Fish and produce markets, with deliveries thrice daily, populate the area. And the still-active other half of Chinese Hospital, adjacent to the project site, is still taking patients throughout the construction.” DPR’s superintendent Jerry McKinley told the Business Times that demolition crews used a concrete cruncher to chew through the old building to keep debris from striking adjacent structures. “You’ve got a hospital right on one side and residences on the other,” he said.

Local Hires at Site
The small crew of about 20 workers on the project includes local residents brought on through the city’s local hire program. DPR is also the prime contractor for other hospital projects in the City, including the UCSF Medical Center at Mission Bay and UCSF Regeneration Medicine Building.

Chinese Hospital grew out of the Tung Wah Dispensary, which opened in 1899. By the early 1920s, the Dispensary had outgrown its space, while other San Francisco providers continued to deny health care access to the local Chinese community. In 1923, 15 community organizations created the non-profit Chinese Hospital Association and raised funds for construction of the facility at 835 Jackson Street, which opened its doors with 60 acute beds on April 18, 1925.