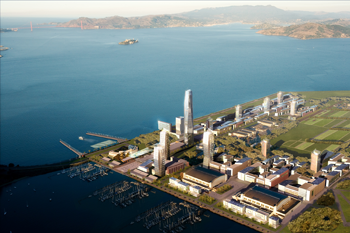 The Treasure Island development is expected to generate 2,000 construction jobs and 3,000 permanent jobs.

One of the largest development sites in the San Francisco Bay Area, the Treasure Island development is expected to generate 2,000 construction jobs annually and 3,000 permanent jobs, with 50 percent of the jobs targeted for San Franciscans and 25 percent targeted to low income or formerly homeless San Franciscans.

“The PLA will ensure that $1.5 billion of work over the next 20 years will be performed under union standards and conditions and that the workforce will be paid union wages,” said SFBCTC Secretary-Treasurer Mike Theriault.

The $1.5 billion project to transform the 404-acre man-made island into a new, revitalized neighborhood is touted as “one of the most environmentally sustainable development plans in US history,” according to the Treasure Island Development Corporation (TIDC). The TIDC is a joint venture of Lennar Corporation, Wilson Meany Sullivan, Stockbridge Real Estate Funds, and Kenwood Investments formed to develop the project. It has been slowly making its way through the approvals process since first unveiled in 2006. The SF Board of Supervisors unanimously passed the Treasure Island/Yerba Buena Island Development project in June 2011. Many building trades union members turned out in support of the project, including members of the Carpenters, Operating Engineers, Iron Workers, Laborers and Painters.

The Land Use Plan calls for establishing Treasure Island as “a vibrant commercial and visitor destination, including encouraging arts, cultural, entertainment and educational uses, that serve as both an amenity for San Francisco residents and a destination for nonresidents,” as well as creating “… the most intense residential density and the majority of commercial uses focused on the western shore to capitalize on the spectacular views to San Francisco as a public resource.”

The mixed-use development will have a new commercial town center and neighborhood, three hotels and hundreds of acres of parks and open space. About 8,000 residential units will be added, along with 235,000 square feet of retail space, 100,000 square feet of new office space, a new ferry terminal, upgraded roads and infrastructure, and more than 300 acres of public parks and open space.

The transformation of the former naval base into a new San Francisco community is anticipated to become one of the foremost transit-oriented sustainable developments in the United States. New housing would be clustered within a 10-minute walk to the new ferry terminal directly across from the city’s Ferry Building. The aim of the plan is to reduce dependence on cars, and would also upgrade bus service to the islands and add a free intra-island shuttle for residents. Currently, housing is clustered at the northeast corner of Treasure Island, which now has about 2,000 residents, one small store, a public elementary school, and a Labor Department Job Corps program.

Treasure Island is an artificial island built during the New Deal era by the federal Works Progress Administration (WPA). Construction began in February 1936 and was completed in January 1939, originally as the site for the Golden Gate International Exposition. Built using 29 million cubic yards of sand and gravel dredged from the Bay and the Sacramento River delta, Treasure Island is subject to subsidence or liquefaction in the event of an earthquake. Developers will need to seismically retrofit the island itself, with a plan to install 35-foot cement columns that will be driven into the soil around the perimeter of the island.