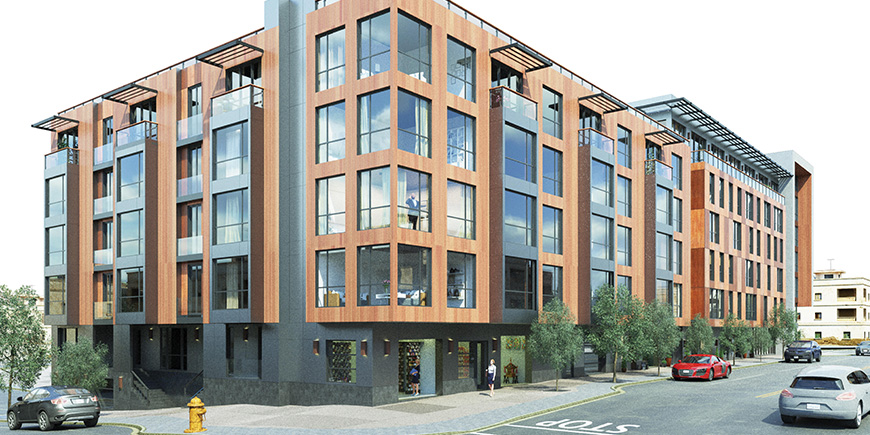 Lennar Multifamily Communities, a subsidiary of housing developer Lennar Corporation, is seeking approval of a 157-unit apartment building with ground-floor commercial space proposed for South Van Ness Avenue and 26th Street. A Planning Commission hearing originally scheduled for April 21 was rescheduled for August 11, as Organized Labor went to press. The developer recently signed a letter committing to employing an all-union workforce on the project.

Peter Schellinger, Vice President of Development for Lennar Multifamily Communities, told Organized Labor, “We see the building trades as partners as we build this project, and we recognize the value they bring to that partnership.” Schellinger said the developer hasn’t chosen a general contractor but has had discussions with union contractors. Schellinger said Lennar was working to address some of the concerns of some Mission residents who are challenging the project.

“We see the building trades as partners as we build this project, and we recognize the value they bring to that partnership.”

Some residents and community groups have organized to delay the project, calling for a higher percentage of below-market-rate units than the 12 percent Lennar proposed.

“We proposed a code-compliant project like other developments in the Mission that have been approved,” Schellinger said. He said Lennar has engaged with the community and offered to have some of the ground floor spaces available for artisans and crafts people–some of whom face being displaced from live-work spaces in parts of the Mission. “We intend to offer trade shops at below-market-rate, and below-market-rate homes,” he said.

The San Francisco Housing Action Coalition (SFHAC) endorsed the project, noting in a letter of support that Lennar Multifamily’s plans “have merit and align with our goals of increasing the supply of well-designed, well-located housing at all levels of affordability in San Francisco.” SFHAC also urged the developer to explore ways of increasing the percentage of affordable units.

The project would replace the McMillan Electrical building at 26th and Van Ness. Schellinger pointed out that Lennar’s purchase of the building from McMillan Electric enabled the union contractor to move to a larger building, expand, and hire more people. This would be the first project in San Francisco for Lennar Multifamily, a separate division of the Lennar Corporation, which is the developer for The San Francisco Shipyard in Hunters Point, Candlestick Point and Treasure Island. Lennar Multifamily first proposed the apartment project in 2014. The six-story building would include a mix of studios, one-bedroom and two-bedroom apartments. If approved by the Planning Commission and Board of Supervisors, the project would break ground in the third or fourth quarter of 2017.