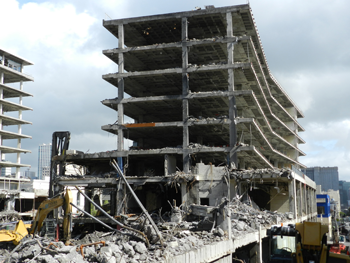 Demolition work on the old Cathedral Hill Hotel on Van Ness Avenue at Geary is “on schedule and running smoothly,” California Pacific Medical Center spokesman Dean Fryer told Organized Labor. The general contractor for the all-union project is HerreroBOLDT, with subcontractor Ferma doing the demolition work. Fryer said the buildings will be completely brought down in late April or early May. Excavation of the site will begin in May and continue through October.

California Pacific Medical Center will build two state-of-the-art, seismically safe hospitals – the new 304-bed Cathedral Hill hospital and a new 120-bed hospital at St. Luke’s campus in the Mission District. Construction of the two hospitals will cost $2 billion, and will employ up to 1,500 workers in the construction trades over the life of the project.

Demolition of the old hotel began last fall with an official groundbreaking ceremony and the removal of the old Cathedral Hill Hotel sign. In the past four months, Laborers Local 67 members working for Bayview Environmental performed the abatement work. Local 67 Field Rep. Ruben Barba said about 50 Local 67 members removed asbestos and other hazardous materials. Most of the abatement work has been completed, with a small crew now finishing up the work.

In order to contain dust and noise, the demolition began with the interior and non-structural walls, then progressed outward. Crews are about half way through removing the hundreds of windows from the seven story buildings. Some materials will be salvaged and much of it recycled in compliance with the city’s Construction and Demolition Debris Recovery Ordinance that requires all construction and demolition debris to be transported to a registered facility that can divert a minimum of 65 percent of the material from landfills. Fryer said about 90 percent of the structure will be recycled.

Miquel Penn, Project Executive for HerreroBOLDT, said the demolition was complicated, but was going according to plan. He said the contractors and developer were using an integrated project delivery method, and that “there is a real sense of collaboration” on the project to get it done on time.

The development agreement between the City and CPMC calls for the hospital operator to contribute $4 million to the City’s workforce training programs to help prepare residents for construction and permanent jobs. It includes a Local Hire and Workforce Training component that calls for hiring at least 30 percent of all construction workers from San Francisco, including apprentices. CPMC’s Fryer said CPMC and the contractors are working with City Build to bring in local workers. “It has been great, and we are getting the folks we need for the work,” he said.

At the hospital’s groundbreaking event last fall, SF Building Trades Council Executive Secretary-Treasurer Mike Theriault noted that the project would bring new apprentices into the trades. The new apprentices will receive a high level of on-the-job training at the project because “hospital construction is very complicated,” Theriault said. “We in the union trades are the people to do it. We train our folks to a higher level than our competition.” Fryer said he agreed, and that the project provided, “an excellent opportunity for San Francisco residents to get into apprenticeship programs and be trained.”

Fryer said that CPMC would begin site preparation work soon at the St. Luke’s site. Construction of the new hospital at St. Luke’s will begin in October.