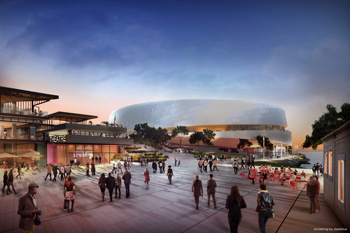 A lawsuit has been filed challenging a ballot measure that would impose tighter restrictions on waterfront development and impact numerous projects, including the construction of the new Golden State Warriors Arena.

A lawsuit challenging the ballot measure that would impose tighter restrictions on waterfront development by requiring voter approval for projects that exceed existing height limits was filed in San Francisco Superior Court on Feb. 14. Earlier in February, the groups that used the referendum process to stop the 8 Washington project filed petitions with the City’s Department of Elections to qualify the “Waterfront Height Limit Right to Vote Act” for the June election.

The Waterfront Height Limit initiative could have wide-ranging implications, impacting construction of the Golden State Warriors Arena proposed for Piers 30-32 and the condos planned nearby, as well as projects at Pier 70 and Seawall Lot 337 south of AT&T Park. Proponents of the height limit measure say it would be “a permanent tool to protect the waterfront.” The initiative defines “waterfront” as “land transferred to the City and County of San Francisco pursuant to Chapter 1333 of the Statutes of 1968, as well as any other property which is owned by or under the control of the Port Commission of San Francisco as of January 1, 2014 or acquired thereafter.”

The San Francisco Chronicle reported in January that Mark Meier, the chief legal counsel for the State Lands Commission, had questioned the legality of the proposed measure, writing in a letter to City Attorney Dennis Herrera that it is of “questionable validity.”

In filing the lawsuit to challenge the measure, attorney Robin Johansen of Remcho, Johansen & Purcell wrote that the ballot measure seeks to regulate state lands held in trust for all the people of the state – not just San Franciscans. She pointed out that the Port Commission was given jurisdiction over the waterfront, property that was transferred to the City by the State of California through the Burton Act in 1968. The state also “expressly prohibited those lands from being subject to local initiatives,” Johansen added.

The suit calls for removing the measure from the ballot and notes that if it isn’t removed, “planning on the waterfront will be frozen through the June election, then likely for years thereafter if the measure passes.”

Theriault said he joined the lawsuit against the height limits measure as a building trades union member and a private citizen of San Francisco. “For the building trades, we are looking at thousands of jobs that would be lost if projects along the waterfront are killed preemptively,” he said.

“As an individual San Franciscan, I have two sons who are in their mid-twenties and I’d like them to be able to stay in San Francisco and be able to afford to live here,” Theriault continued. “It’s in all of our interest to be able to build more housing and not kill any possibility of building housing before it even goes through the approval process.”

Theriault pointed out that allowing local voters to usurp state law that has jurisdiction over waterfront development could backfire against environmental protections throughout California. A dangerous precedent would be set that could lead to residents of more conservative counties or cities voting to usurp the state’s authority to protect endangered species, waterways, lands or habitats.

Colen, an affordable housing advocate, called the waterfront heights measure, “one of the worst pieces of public policy” he had ever seen. “It would down-zone the waterfront area that was a maritime and industrial area that is now underutilized,” Colen said. “It directly threatens about 2,700 housing units planned for the area; that includes 500 permanently affordable units that would be built on site.” Colen noted that the measure to limit development along the waterfront doesn’t mention where those much needed housing units would be built if the measure passes.

“These projects have been laboriously planned for many years, with developers working with city planners and the community,” Colen noted. “If we want more housing and more amenities like parks, open space, and transportation improvements, we have to develop the waterfront and put in more than just parking lots and private spaces.” Colen said he was concerned that in the current climate where emotions are high and developers blamed for the high cost of housing, projects that would create more housing and fund affordable housing will be difficult to build. “It scares away developers and investors who can fund the projects and the infrastructure improvements that are too expensive for the City or the Port to fund,” he said. “There is a fear of developers but the fact is, if we want to build housing, somebody has to fund it.”

Colen pointed out that along with the infrastructure upgrades that are made when development takes place, improvements made along the waterfront have been good for the San Francisco economy and neighborhoods. He cited the ballpark that’s home to Major League Baseball’s Giants. “It has revived a whole neighborhood,” Colen said. He added that height helps with much-needed density.

While proponents of limiting waterfront development cited increased traffic along the Embarcadero as a reason for seeking to put development approval before the voters, the opposition to height limits is largely driven by the desire of Telegraph Hill residents and others to protect their views, according to the Chronicle.

Woods has worked on waterfront planning for more than 25 years, mostly for Mission Bay and the Southeastern waterfront areas. “What the waterfront land use plan set up was a collaborative effort to balance the needs of the community, the Port, and the development partners,” she said. “There has to be fiscal feasibility for the developers as well as a public benefit. The ballot measure would undercut that process.”

Woods noted that a local initiative can’t override the state law, and the 1968 Burton Act is enshrined in the City Charter. She said that taking away the jurisdiction over the waterfront lands that the State Lands Commission and Bay Conservation and Development Commission has would make it harder to plan and build. She pointed out that if the height limits measure passes, it could also undercut the California Environmental Quality Act and the ability to use CEQA to require mitigation if projects are approved by local voters rather than through the process that now includes state agencies.

Woods added that there is a public process that engages the community and developers to find a balance between what is financially feasible for a private developer and what is required for the public good. She said that process may involve negotiations with developers about heights, and that less height means less open space.

The Port needs private development partners because it has a $1.8 billion capital need, Woods said. Woods noted that the Port does not have enough funding to address basic maintenance of deteriorating piers, or make seismic upgrades, repair crumbling seawalls, or mitigate the impacts of sea level rise and climate change.

Woods said along with concerns for funding for waterfront improvements and parks, she agreed there was a need to create jobs. “The last few years we have seen lean times,” she said. “A lot of my friends are in the trades, and they need work.”