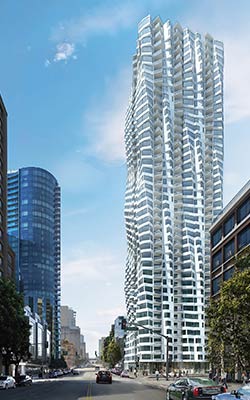 The San Francisco Board of Supervisors unanimously approved a height increase for Tishman Speyer’s 160 Folsom condominium high-rise on April 19. The Board’s vote amends the Redevelopment Plan for the Transbay Redevelopment Project Area (TRPA) to increase the maximum height limit from 300 feet to 400 feet on Block 1 of the TRPA. Supervisor Jane Kim and Mayor Ed Lee sponsored the legislation, which will allow Tishman Speyer to build a 39-story tower with an additional 73 housing units. In exchange for the increase in height, the developer agreed to increase the number of affordable units in the project to 40 percent. The original 300-foot proposal included 318 total residential units, with 112 (35 percent) affordable-to-moderate income households earning 80 to 120 percent of area median income. Under the newly approved proposal, the tower will have 391 units, with 156 affordable to moderate income households. The developer also agreed to provide a fund to help owners of below-market-rate units pay for monthly Homeowner Association dues.

In February, the San Francisco Planning Commission voted 5-1 to support increasing the height limit. Building Trades union members spoke in support of the additional housing, along with the San Francisco Housing Action Coalition and Transbay Citizens Advisory Committee. The Commission on Community Investment and Infrastructure (OCII), the Successor Agency to the San Francisco Redevelopment Agency, approved a height increase for the residential tower in January. On June 21, the Commission authorized an amendment to the Development Controls and Design Guidelines for the Transbay Redevelopment Project to allow the increased height and approved the design of the project. According to the OCII, the amended version of the project will help achieve the goals and objectives of the Redevelopment Plan that call for a mixture of housing types and sizes to attract a diverse residential population, including families and people of all income levels.

The Board of Supervisors discussed the project and heard public comment at it’s meeting on April 12, and put off the vote until the following week. Supervisor Kim, who represents the Transbay District, said the project will add more middle-income housing, which she noted is housing affordable for a family of four earning between $80,000 - $100,000 annually. Kim said the amended project includes “the type of housing that the City has not been building enough of. These are for households who are nurses, teachers, first responders and entry-level workers.” She noted that the affordable units will be dispersed within the first 26 floors of the 39-story tower and the podium building and townhouses on-site. Kim said the developer also agreed to ensure that the amenities offered within the project are equally accessible to residents of all income levels.

“Raising heights on a project has always been a source of controversy in a neighborhood, and when we confer more value on a land, we want to ensure that we are working with the developer to share that value back with the community,” Kim said. She said adding an additional 44 affordable units as part of the 73 additional units means the project meets the requirement that 35 percent of housing units in the Transbay District are affordable. Tishman Speyer agreed to cover $120 million of the cost of construction of the added affordable units, with the OCII paying $19.18 million for the construction of 76 units. Supervisor Scott Wiener said he thought it was important to note that the developer would be able to hit the 40 percent affordability number not just through its investment, but through almost $20 million in public taxpayer funds being spent by the OCII.

“I’m not criticizing the idea of having the developer putting in a portion of the value necessary to achieve whatever percentage of affordability, and taxpayers of San Francisco also putting in money, or value, to increase affordability,” Wiener said.

Supervisor Kim said that “We have always been able to achieve higher levels of affordability because taxpayers in San Francisco have wanted us to invest more public dollars to build more affordable housing.”

Supervisor Norman Yee said increasing the height of the building is “an opportunity for height to advance affordability.”

During the public comment period of the Board’s April 12 meeting, several Building Trades union representatives spoke in support of the project.

Joel Koppel of IBEW Local 6 said the Transbay District is an ideal location for density, with access to transportation, work and retail and helps residents “stay local and spend money in the city. Labor will be involved, and our local contractors will be involved. Tishman Speyer has a long history of contributing to the working middle class in San Francisco with 100 percent union jobs, and we support the height increase.”

Armie Morgan of Operating Engineers Local 3 spoke in support of the height increase. “This project will provide union jobs for our members and much needed affordable housing. Tishman has been a good partner with Labor.”

Tony Rodriguez of Sprinklerfitters Local 483 said the union supports the project. “It would also be nice if some of the workers who build these projects could afford to live in them,” he said. “That would be possible because the developer has always shown that they build their projects with contractors that pay area standard wages and benefits that allow the workers to live in San Francisco.” Rodriguez said the project would also add to the San Francisco skyline, and thanked Supervisor Kim for negotiating a good deal that will add much needed new housing in the city.

San Francisco Building and Construction Trades Council Executive Secretary-Treasurer Mike Theriault said there has always been a consensus on the Board in support of projects in the Transbay District and that the objections raised by a few local residents about their views shouldn’t be a concern of the Board.

“The Board should recognize that the increased height does allow for a greater proportion of affordability in the project,” Theriault said. “Tishman Speyer has long been a responsible developer in San Francisco and has been good for the building trades members.”

Lend Lease is the general contractor for the project, which is expected to generate hundreds of jobs for building trades union members. Tishman Speyer is the developer of the nearby Lumina and Infinity condo projects, which were built with union labor.

The project is still going through the entitlement process and will next go before the Board of Supervisors’ Land Use Committee sometime in late July.