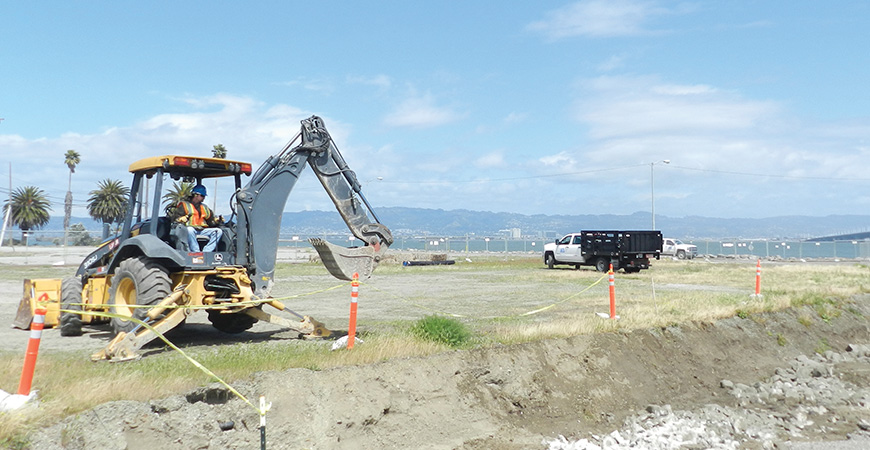 The first phase of construction to transform Treasure Island into a new community began in March with the start of demolition of former Navy buildings on Yerba Buena Island. Approximately 94 acres on Yerba Buena Island and 367 acres on Treasure Island will become the site of a dense, mixed-use development with residential, commercial, cultural, hotel, recreational and retail uses centered around an intermodal transit hub. The $1.5 billion project on the 404-acre Treasure Island is touted by its developers as “one of the most environmentally sustainable development plans in US history.” A joint venture of Lennar Corporation, Wilson Meany, Stockbridge Real Estate Funds and Kenwood Investments is developing the project.

Cost of the Treasure Island development

Construction jobs to be created annually

Permanent jobs to be created

Work on Treasure Island will be covered by a Project Labor Agreement between the developers and building trades unions. Kheay Loke, senior development manager at Wilson Meany, said, “We are happy that we entered into a PLA and can build with union labor. The quality of labor on our other projects has been good, and we look forward to continuing our relationship with the building trades.”

Infrastructure work for the first phase will cost $155 million and take around two-and-a-half years, Loke said. Silverado Contractors is performing the demolition and abatement work now underway. Loke said abatement work includes removal of lead paint and asbestos from some of the old Navy barracks on Treasure Island that will be torn down. AMPCO North, a newly unionized division of Anaheim-based AMPCO Contracting, will do demolition, site work and abatement beginning this summer. The contractor recently became a signatory contractor with the Operating Engineers and Laborers unions.

The $1.5 billion Treasure Island/Yerba Buena Island redevelopment is expected to generate 2,000 construction jobs annually and 3,000 permanent jobs, with 50 percent of the jobs targeted for San Franciscans and 25 percent targeted to low income or formerly homeless San Franciscans. Loke said the developers are collaborating with different agencies, including the Jobs Corps and Treasure Island Homeless Development Initiative, to hire local workers.

The mixed-use development will have a new commercial town center and neighborhood, three hotels and hundreds of acres of parks and open space. About 8,000 residential units will be added, including single family townhomes, mid-rise and high-rise towers, with 25 percent designated as affordable housing. Approximately 235,000 square feet of retail space, 100,000 square feet of new office space, a new ferry terminal, upgraded roads and infrastructure, and over 300 acres of public parks and open space will also be developed. The project has been slowly making its way through the approvals process and challenges since first unveiled in 2006. In December 2010, the Navy transferred its former Naval Station to the City’s Treasure Island Development Authority for $105 million. The TIDA approved a land use plan and environmental impact report in April 2011, and the San Francisco Board of Supervisors unanimously passed the Treasure Island/Yerba Buena Island Development project in June 2011. In December 2012, a Superior Court Judge rejected a challenge to the project’s environmental impact report, and Lennar and China Development Bank announced a partnership and potential $1.7 billion loan for major infrastructure projects at Treasure Island and Lennar’s Hunters Point Shipyard project.

Loke said demolition and abatement work is ahead of schedule and construction of new water tanks and site grading will begin in July. Further infrastructure work will begin this fall, including installing new water and sewer pipes and utilities, and road improvements, which will continue for a year until the fall of 2017. Demolition of the old star barracks that face San Francisco will start in August.

A crew of 30 Laborers from Local 67 is doing abatement work in several buildings on Yerba Buena Island for subcontractor Ecobay. In June, the crew will move to Treasure Island to do hazardous materials removal at the old star barracks building.

A major component of the project will be strengthening the man-made island itself. Loke said deep dynamic compaction and hydro-compaction – stabilizing the loose, sandy fill dirt that makes up Treasure Island that was subject to liquefaction in the event of an earthquake by injecting grout into the soil to make it more dense – will begin next year and take between six and nine months to complete. “This will create a stable development footprint,” he said.

Along with the seismic strengthening through compaction, the exterior of the island will also be built up.

“We will be elevating the exterior and interior of the island three feet above the high tide line based on FEMA’s estimate for flooding,” Loke said. “It is designed to account for sea level rise, but can also be raised more.” As part of the adaptive management strategy, the perimeter levee can be raised three to seven feet higher than the Treasure Island surface. Loke pointed out that the levee would be three feet higher than the Embarcadero.

The Treasure Island ferry and piers will be protected from high winds by a long breakwater that will be constructed starting late 2017. Ferry service between the island and the city is expected to begin in 2022.

“It’s taken almost two decades to get to this point and we’re eager to transform this former naval base into a vibrant community with more housing, jobs and economic opportunities for our residents,” San Francisco Mayor Ed Lee said in a statement.

“A transformative development like this only happens because of the strong partnership with the city and the community. Together, we are committed to creating another unique San Francisco neighborhood,” said Lennar Urban’s president Kofi Bonner in a statement.

While the first phases of the development get underway, contractors working for the U.S. Navy are working on remediation measures to remove hazardous materials dumped there by the military over several decades. The Navy contends that the potentially radioactive material is not a danger to the public or future residents.

The development of Treasure Island and Yerba Buena Island could take anywhere from 10 to 15 years to complete. The start of construction is “a big milestone,” Loke said. “I think it’s a project that the city of San Francisco will be very proud of.”