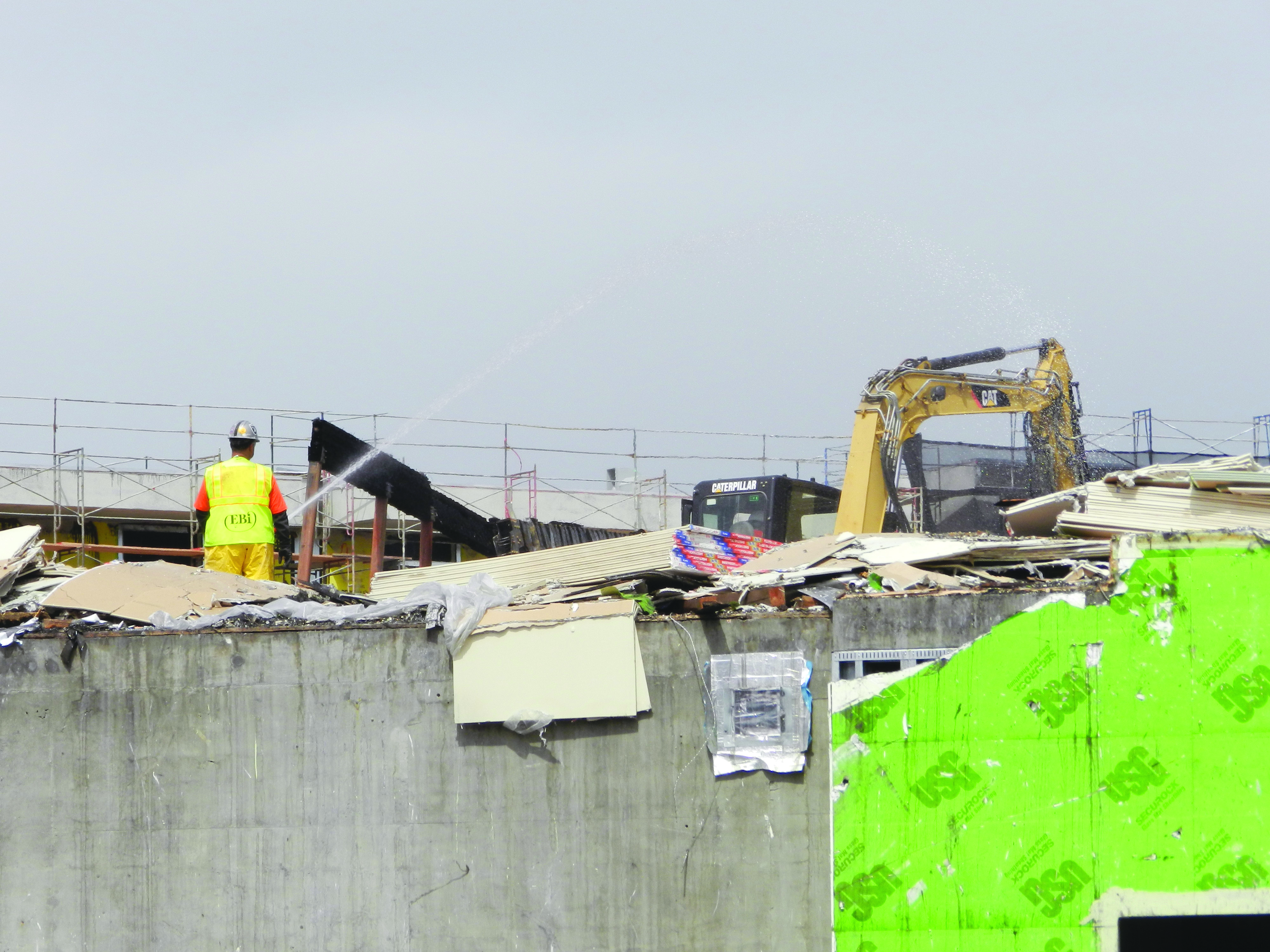 Work stopped at an apartment building project in Mission Bay after a five-alarm fire raged for several hours. The $227 million, 172-unit apartment building was one of two being built by BRE and contractor Suffolk Construction at 4th Street and China Basin.

Demolition of the apartment building in Mission Bay just south of AT&T Park was being completed as Organized Labor went to press, with still no word of when the structure would be re-built or what caused the fire that destroyed the building on March 11. A five-alarm fire raged for several hours and stopped construction of the project which was almost 80 percent complete and set to open in August. The $227 million, 172-unit apartment building is one of two being built by BRE and contractor Suffolk Construction at 4th street and China Basin.

BRE Properties, the San Francisco-based developer, issued a statement immediately after the fire, but has not commented to the press since March 12 about the cause of the fire or plans to rebuild. A spokesperson for BRE’s public relations firm said the developer was not answering media inquiries. BRE’s initial statement noted that once the fire broke out at 5 p.m. at the Block 5 building under construction, “the project was safely evacuated and all associates and contractors have been accounted for.” The developer extended its gratitude to the fire and emergency services personnel for their rapid response, and began assessing the cause of the fire.

Suffolk Construction issued a statement after the fire, saying, “We want to thank the firefighters for their bravery and leadership last evening. Their skillful response ensured that the community remained safe. We are now focused on identifying the cause of the fire and remediating the site.”

There were no serious injuries from the fire, but two firefighters suffered minor injuries, according to media reports. More than 150 firefighters worked to put out the blaze and keep it from spreading to nearby structures – including some recently completed projects and the neighboring 188-unit Block 11 project under construction. News reports noted that more than 300 residents who lived in nearby buildings were temporarily displaced.

While there was some speculation in the press about the cause of the fire, neither the San Francisco Fire Department nor the engineers hired by Suffolk Construction have determined the cause. Fire officials told the media on March 12 that it would take some time for investigators to sift through the debris and find the cause of the fire.

The fire-suppression systems that might have slowed or stopped the fire had not yet been installed in the wood-framed building. San Francisco Building & Construction Trades Council Secretary-Treasurer Mike Theriault said buildings are at a relatively high risk for fire at the stage of construction before the sprinkler systems are installed. “Once the sprinklers are in, it’s great. Once the drywall is in, it’s great. But prior to that, there’s a vulnerability in this type of structure,” Theriault said.

The developer noted that, “We carry comprehensive insurance coverage for events such as this, including hard cost replacement, soft costs and loss of revenue. We believe any losses to the company caused by the fire should be covered by insurance and will not have a material effect on our financial condition, operating results, or pending merger transaction.” (BRE recently completed a merger with Essex Property Trust, Inc. of Palo Alto.)

That developer’s insurance will also cover the replacement of any of the construction crew’s tools lost in the fire.

Ironworkers Local 377 Organizer Dan Prince said most crafts have provisions in their contracts that call for tools in the crew tool box that are lost in a fire to be replaced at the employer’s expense. With the high number of projects under construction now, most of the workers will be able to find employment while the BRE project is stalled. Prince noted that, “Work is good now in the Bay Area,” and that if the fire had happened in the middle of the recession, it would have hurt much more.

Mike Dinapoli, COO for Suffolk’s San Francisco office, said the contractor was still in demolition mode and evaluating the structure. “We fully anticipate that over the next six weeks we will start up again,” he said. He said there had been a fairly large crew on the site, but many of the workers were diverted to the Block 11 project. He said job loss was mitigated by the fact that the second building was in progress.

Dinapoli said Suffolk hoped to bring back all the subcontractors. He said some work was underway to reroute power back to the site. “The city has been fantastic to work with and we will be able to complete the work under the existing permits,” he said.