Building on a Successful Relationship 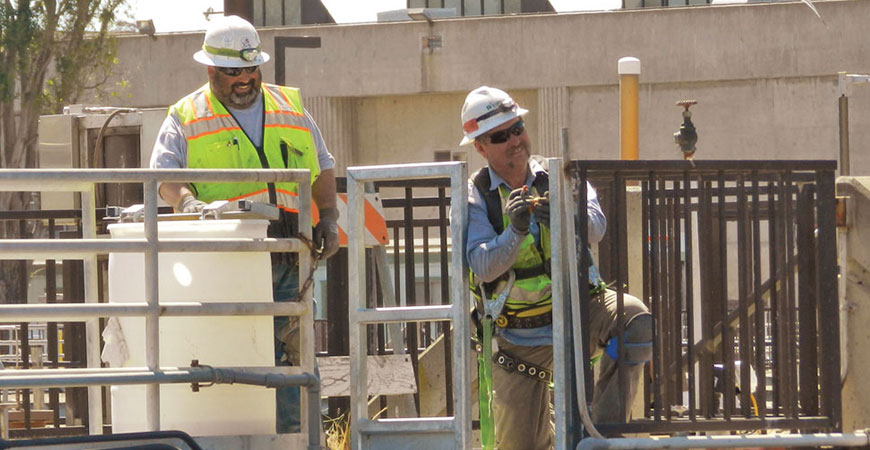 The San Francisco Public Utilities Commission (SFPUC) is expected to vote in April on extending the Project Labor Agreement governing work from its Water System Improvement Project (WSIP) to the work on its $6.9 billion Sewer System Improvement Project (SSIP). At the SFPUC meeting on March 8, staff recommended extending the PLA and presented information about the success of the WSIP PLA.

SFPUC Workforce and Economic Program Services Director Masood Ordikhani reviewed the benefits of extending the WSIP PLA to the SSIP. He outlined results of the WSIP PLA, noting that the project labor agreement enabled the agency to access skilled labor and created labor harmony.

“There is a high demand for skilled labor, and the PLA provides contractors skilled workers from the building trades,” Ordikhani told commissioners. “The program also allows local contractors and businesses to participate and provides training and jobs for San Francisco residents.”

Ordikhani added that one of the most important benefits of extending the PLA is that, “our local contractors, staff and building trades unions are all familiar with the program.” He said having pre-job meetings and a committee to deal with jurisdictional issues “allows us to address issues as they arise and be able to complete the very important projects on time.”

Ordikhani told Commissioners that during the nine years the PLA has been in effect for the WSIP, there has been over 9 million craft hours of work performed, no delays or work stoppage due to a labor dispute, and a job safety incidence rate 50 percent higher than national standards. He said $450 million in wages has been paid for the WSIP work, which he noted began at the height of the recession when unemployment was high in the trades. Additionally, 12,000 workers were employed, with 6,000 of them residents of the SFPUC service area (San Francisco, Alameda, San Mateo and Stanislaus counties), and 70 percent of apprentice hours worked by SFPUC service area residents.

“That is something we are very proud of – working with the trades to employ people in our service area,” Ordikhani said. “Our partnership with Pat Mulligan and City Build allowed us to put city residents to work, and our partnership with Mike Theriault and the Building Trades has enabled us to do some very specific training through building trades affiliates.”

The training included concrete form construction in partnership with Carpenters Local 22, heavy equipment GPS training through Operating Engineers Local 3 and a miner tender training with Laborers Local 261. The SFPUC, in collaboration with the Laborers’ Training Center in San Ramon and Mission Neighborhood Centers of San Francisco, also successfully launched a pilot Bioregional Habitat Restoration Training Program that will addresses the need for skilled workers to support the construction and maintenance of biologically sensitive mitigation sites for the SFPUC’s Water System Improvement Program. The skills can also be applied to SSIP’s Green Infrastructure projects, including creating bioswales – landscape elements designed to remove silt and pollution from surface runoff water.

“It is important to invest in careers, not just one-off jobs, but really sustainable employment with good wages and benefits,” Ordikhani said.

“We are excited about the success of the heavy equipment training and impressed by the focus on jobs for underserved communities,” he said.

San Francisco Building and Construction Trades Council Secretary-Treasurer Michael Theriault noted that non-union contractors can also participate in the PLA, and that the PLA protects local jobs. He said SFPUC’s change out of water meters in 2010 had a non-union general contractor, who had intended to bring in their workforce from out of state

“Under local hire rules, they could have done that, but what prevented that is that working with you we were able to institute a dispatch procedure that limited the number of out of state workers they could bring in,” Theriault said. The project employed many Plumbers Local 38 members who had been unemployed for one year or more during the recession.

Plumbers Local 38 Business Agent Bill Blackwell urged the Commission to continue the PLA to the SSIP and commented that on the water meter project, the contractor was only able to bring in seven employees, and three of those have since joined the union.

Pat Mulligan, City Build Director, discussed his experience working with the PLA and thanked the SFPUC for the opportunity to integrate City Build’s training with specific SFPUC infrastructure projects.

Some Sewer System Improvement Projects are underway – mostly involving site preparation. The SFPUC employs many union members in-house – with a crew of stationary engineers who maintain facilities, as well as operating engineers, laborers and carpenters and members of the International Federation of Professional and Technical Engineers, Local 21. For major infrastructure projects like the WSIP and SSIP, the agency uses outside contractors.

The $2.7 billion Phase I of the SSIP work has been authorized. Work will include sewer line and pump station upgrades, developing sustainable methods to manage stormwater, and modernization and seismic upgrades to waste water treatment facilities.

Organized Labor recently toured the Southeast Treatment Plant, and will have a report on projects there in a future issue. Work will include substantial upgrades to wastewater treatment tanks, new biosolids digester facilities, replacement of the headworks (where the flow enters the plant), structural and seismic retrofits, new oxygen plant and influent pumps, odor control improvements, and architectural and landscape improvements. The facility near Third and Evans streets in the Bayview District treats 57 million gallons of wastewater per day and up to 250 million gallons per day during rain storms. The North Point Wet-Weather Facility near Fisherman’s Wharf and the Oceanside Water Pollution Control Treatment Plant on the Great Highway between the San Francisco Zoo and Lake Merced will also receive improvements.

The projects are expected to generate a significant number of jobs for the building trades over the seven years of the three-phase project.