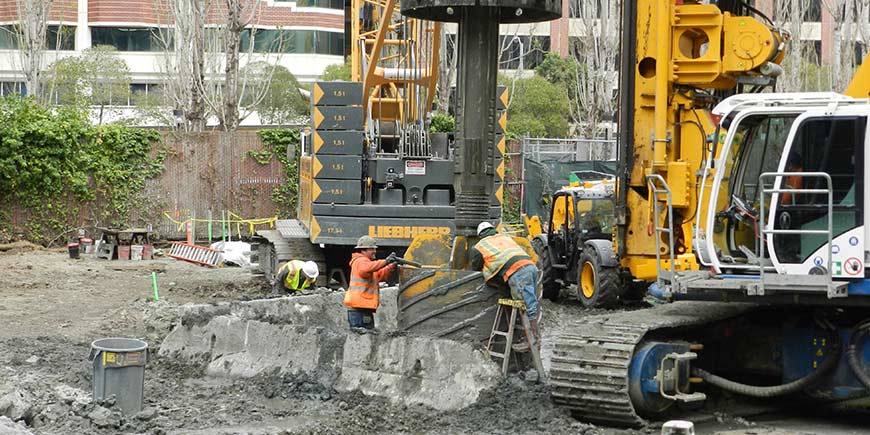 Construction on Park Tower began in October and is expected to be completed in the spring of 2018. - Photo by Paul Burton

Work is progressing nicely on a new 43-story office building under construction at Howard and Beale streets in the Transbay Transit District. Clark Construction Group is the general contractor, with subcontractors Bigge Crane and Condon-Johnson currently doing excavation, pile driving and grading. Between 10 and 20 union operating engineers, laborers and pile drivers are currently on the jobsite.

Height in stories of Park Tower, to be completed in 2018

Clark, in a joint venture with Hathaway Dinwiddie, is also the General Contractor for the Salesforce Tower – which once completed will be one of the tallest buildings in the country – under construction nearby at First and Mission streets. Hundreds of union construction workers are also employed on residential, office and mixed-use projects at the new Transbay Transit Center. The Transbay Terminal is covered under a Project Labor Agreement between the Building Trades and the Transbay Joint Powers Authority and the Building Trades have come to an agreement with Clark for a PLA for the Park Tower.

Park Tower is designed by Chicago-based architect Goettsch Partners. According to the architects, “The tower is designed as a series of three massings that offer a variety of floor plate sizes for tenants. Within these distinct massing elements, the design carves out a series of large outdoor terraces that provide substantial outdoor amenity space to office tenants.” The flexible floor plans with floor plates ranging from 27,500-120,000 square feet can accommodate different kinds of commercial or high tech tenants. The building will have 17,000 square feet of outdoor space on some of the upper floors with 14 sky decks, each with about 1,000 square feet of private outdoor space.

The 605-foot-tall building’s façade is comprised of floor-to-ceiling glass articulated with a series of vertical glass fins at the tower terraces, which occur at three-story intervals on the upper half of the tower. The building is being designed to meet LEED Gold certification through use of natural light and ventilation, energy efficient heating and cooling systems, stormwater collection and reuse, and other energy efficiency measures. The project also wins LEED points for including parking for alternative fuel automobiles and being close to the many public transportation options in the neighborhood and the future Transbay Transit Center. The Park Tower site is directly across Beale Street from the 5.4-acre City Park that will be on top of the Transbay Transit Center, now under construction.

The project is a joint venture of the John Buck Company and Golub and Company, who bought the site for $172.5 million from San Francisco’s Office of Community Investment and Infrastructure, the successor to the Redevelopment Agency that oversees the development of the Transbay District. The funds from the land sale will go to the Transbay Joint Powers Authority to cover some of the construction costs of the Transbay Transit Center.

The developer touts Park Tower’s proximity to the new Transbay Transit Center and its growing neighborhood that includes more than 4,400 residential units, 200,000 square feet of retail and nine acres of new parks planned or under construction in the Transbay Transit District.

Clark Construction generally uses union subcontractors on its projects. The earth work will continue for about a year, with the below grade and foundation work completed at the end of the third quarter 2016. Structural steel work will begin in late 2016 or early 2017, with the project scheduled to be completed by the spring of 2018.