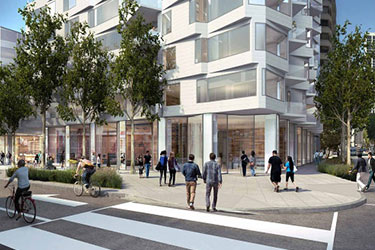 The Commission on Community Investment and Infrastructure, the successor agency to the San Francisco Redevelopment Agency, approved a height increase for the residential tower at 160 Folsom proposed by developer Tishman Speyer at its Jan. 19 meeting.

In a memo to the commission, Tiffany Bohee, Executive Director of the Office of Community Infrastructure and Investment (OCII), noted, “… the current 400-foot development proposal for Block 1 would provide approximately 73 additional housing units on Block 1, for a total of 391 units. Under this proposal, 156 (40 percent) of the units will be affordable to moderate income households.” The original 300-foot proposal would provide approximately 318 total residential units, of which 112 (35 percent) would be affordable to moderate income households earning between 80 and 120 percent of area median income.

Bohee told the San Francisco Chronicle, “I think we cut a really good deal. ... We strongly support the height increase because of the increased affordability and the enhancement to the skyline.”

The amended version of the project would also help achieve the redevelopment plan goals and objectives, including providing a mixture of housing types and sizes to attract a diverse residential population, including families and people of all income levels, according to the OCII.

Units set aside as below market rate would be distributed within the first 26 floors of the 39-story tower and an eight-story building on-site. Tishman Speyer would also help subsidize part of the cost of homeowner association fees for residents who make 80 percent of area median income.

Originally, Tishman Speyer had agreed to purchase the Block 1 land at Folsom and Spear for $19.2 million, with the OCII paying $20.9 million to subsidize the 76 affordable units in the eight-story building. Under the new proposal, in exchange for increased heights and more units overall, Tishman Speyer agreed to increase the number of affordable units, and cover the cost of their construction.

At the Jan. 19 hearing, some local residents expressed concerns about views and shadows cast on nearby public open spaces. OCII project manager Jose Campos presented renderings of the project that showed no significant impacts on the city skyline or Rincon Park on the Embarcadero. The site now includes a surface parking lot owned by the City and County of San Francisco.

The 160 Folsom project, designed by Chicago architect Jeanne Gang, also includes 9,126 square feet of retail, 6,544 square feet of open space, 344 vehicle parking spaces and 150 bicycle parking spaces. San Francisco Chronicle urban design critic John King noted that “From a design point of view, the tower would be a great addition to the blocks between Market Street and the Bay Bridge, the only part of town where construction cranes outnumber food trucks. Gang is the rare high-rise architect who seeks to strike a balance between attention-getting moves and fine-grain details; the tower here would be snaky but subtle, a serious work of contemporary architecture that also has a rhythmic swing.”

The project will go before the Planning Commission in March and the Board of Supervisors sometime this spring.

Webcor is the general contractor for the project, which is expected to generate hundreds of jobs for building trades union members.