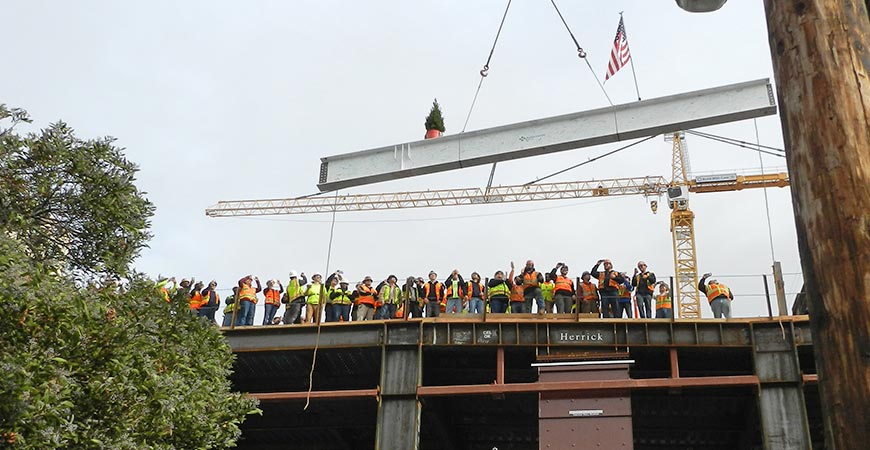 Construction workers celebrate as the final steel beam is raised at California Pacific Medical Center’s Cathedral Hill hospital. The hospital is scheduled to open by 2019. - Photo by Paul Burton 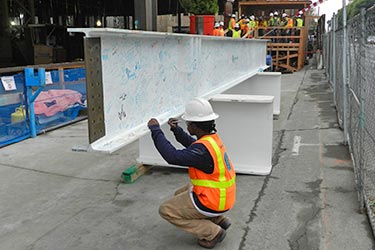 The final beam for the Cathedral Hill hospital topping off ceremony was painted white and signed by workers before the lift. - Photo by Paul Burton

The California Pacific Medical Center celebrated a milestone in its construction of a new Cathedral Hill hospital at Van Ness and Geary with a topping off ceremony and catered lunch for the construction crew on Dec. 8.

CPMC, a Sutter Health affiliate, is building two state-of-the-art, seismically safe hospitals – the new 304-bed Cathedral Hill hospital and a new 120-bed hospital at St. Luke’s campus in the Mission. Herrero Builders and the Boldt Company formed a partnership, HerreroBoldt, to act as the general contractor for Sutter’s CPMC hospitals. Construction of the two new hospitals will cost $2 billion, and will employ up to 1,500 workers in the construction trades over the life of the project.

California Pacific Medical Center COO Hamila Kownacki said the topping off event was a recognition of the hard work and dedication of the construction crews. CPMC CEO Warren Browner praised the construction crews, contractors and subcontractors, and thanked city officials for their efforts to get the new hospital built. He said the topping off ceremony is a nod to all the work that led up to raising the final steel beam and represented the beginning of the next phase of filling in the structure.

The mayor also thanked CPMC for its commitment to hiring local workers. The development agreement between the city and CPMC calls for CPMC to contribute $4 million to the city’s workforce training programs to help prepare residents for construction and permanent jobs. It includes a Local Hire and Workforce Training component that calls for hiring at least 30 percent of all construction workers from San Francisco, including apprentices.

“This job has allowed me to support my family. I can tell my kids, ‘daddy built that.’”

“It’s all about the workforce,” Lee said. “HerreroBoldt has worked hard to make sure they hire local residents.” Lee noted that the contractors exceeded their goal of 40 percent of apprentices on the project being San Francisco residents, hitting 60 percent. Around 35 percent of the total construction workforce consists of local hires, according to CPMC. The hospital is working with the building trades, contractors and subcontractors, and City Build, which coordinates placement of pre-apprenticeship trainees.

After comments from other CPMC officials, Colby Witfield, on his first construction job working for Herrick Steel, made a brief statement before the final I-beam was lifted. He said he was proud to be involved in the construction of the new hospital in his own community, and that the apprenticeship program has given him a pathway to a career. “This job has allowed me to support my family,” Witfield said. “I can tell my kids, ‘daddy built that.’”

With a crew of ironworkers and other construction workers watching from the steel framework at the third level, crane operator L.C. Nolen, an Operating Engineers Local 3 member with Clipper International Equipment, lifted the final steel beam. Two ironworkers atop the structure carefully attached the beam between two steel columns and removed the Christmas tree and American flag that had been placed on the beam before the lift. The beam had also been painted white and signed by dozens of construction workers before the lift.

When completed, the Van Ness and Geary Campus will consist of a modern acute care hospital with 274 patient beds and a medical office building across Van Ness connected by a pedestrian tunnel under the busy street. The 12-story hospital will have 740,000 square feet of diagnostic, treatment and inpatient bed space and departments for women’s health, children’s health, cardiology, oncology, emergency care and organ transplants. The 253,000 square-foot, nine-story medical office building will accommodate outpatient services and support the health care professionals next door.

The hospital and medical office will be LEED certified through use of sustainable design and construction practices. According to CPMC, the hospital’s lightweight structural system will significantly improve the energy effectiveness of the Van Ness and Geary Campus. The building will incorporate a 100 percent filtered outside air system, healthy building materials and water conservation that will result in a setting that promotes the health of patients, staff, and visitors. Contractor HerreroBoldt reported that their “Integrated Project Delivery Team is working with local partners and subcontractors to optimize the construction process. An integrated communications system used during construction of the Van Ness and Geary Campus ensures coordinated design and construction delivery. The latest construction practices streamline the building process, allowing our team to meet the challenges surrounding building health care facilities that adhere to California’s safety standards and address the community’s well-being.”

Along with hiring San Francisco residents through City Build, HerreroBoldt also hired seven interns for the project last summer, six of whom are San Francisco residents, and hosted a group of Tech 21 students for a Summer Internship Days program. Students from John O’Connell High School’s Career Technical Education-Tech 21 class learned about HerreroBoldt’s Integrated Process Design, careers in construction and received a tour of the job site.

The next phase will begin in the first quarter of 2016, with installation of the hospital’s exterior enclosure. The building’s “skin” will be composed of a composite system that includes a blend of aluminum panels, curtain wall and natural stone finish at the lower levels of the building. The glazing system will consist of curtain wall units which include horizontal and vertical mullions, as well as vision glass, spandrel glass and shadow boxes. As the installation of the glazing system works its way around and up the building, the metal panel system will follow closely behind.

Construction of the replacement hospital at the California Pacific Medical Center’s St. Luke’s Campus at Cesar Chavez and Guerrero streets is progressing on schedule, with the steel frame now rising to the top level of the seven-story building. Excavation and below grade structural work began in late 2014. Foundation work took about six months, with steel erection and construction of concrete decks ongoing until May 2016. Exterior enclosure work and the interior build will follow and take around 30 months. When completed by mid-2018, the new 120-bed, seven-story St. Luke’s hospital will be state-of-the-art and seismically safe, and will include services such as inpatient care, diagnostics and treatment, intensive care, and labor and recovery. The existing hospital at the corner of Cesar Chavez and Valencia will be torn down and replaced with medical offices.