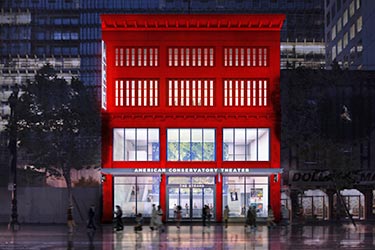 The American Conservatory Theater is setting the stage for change in San Francisco’s Central Market neighborhood, having recently completed a two-year and $33.5 million reclamation project on the area’s historic Strand Theater. A.C.T. broke ground on the project in 2013 after purchasing the theater, located on 1127 Market St., the previous year.

The Strand, which previously stood vacant, reopened in May of 2015, and now serves as a second venue for A.C.T. performances, and as a source of artistic and cultural revitalization for the troubled neighborhood. In fact, the theater’s latest facelift could be said to mirror the transformation occurring in the surrounding Tenderloin neighborhood.

With funding from a donation by board members Jeff and Laurie Ubben, A.C.T. was able to give the theater its second act.

The renovated Strand features a 283-seat theater (which can be transformed into a 175-seat cabaret style space), a 140-seat performance and event space used for actor training and rehearsals, state-of-the-art lighting and sound design, a café, and LEED certification brought on by high-efficiency lighting and water equipment resulting in a 15% save in energy and 40% save in water usage.

Some renovations are made to pay homage to the rich history of the theater, including the incorporation of the original onyx staircase into the renovated lobby flooring and the saving of three pieces of mural art created by the squatters who resided in the Strand before its transformation in 2013.

Plant Construction Company was the general contractor for the project.