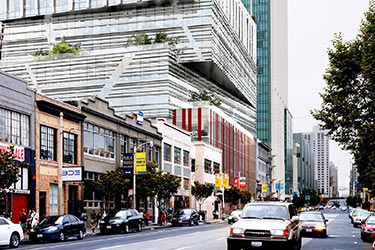 Construction on 5M is expected to start in 2017. The project would be built in phases over five to eight years. - Image Courtesy Forest City

Forest City’s 5M project took a massive step forward after the San Francisco Board of Supervisors approved the development at its Nov. 17 meeting.

The board’s approval came one week after the developer increased the percentage of below-market-rate housing from 33 to 40 percent. The privately funded mixed-use project by developer Forest City on a four-acre site near the San Francisco Chronicle building at Fifth and Mission streets now includes 241 affordable units. The project will provide some affordable housing on site, some within the same block, and the remainder very close by to localize benefits. More than 70 percent of the below-market-rate units are on land owned by the developer.

The mixed-use development will have 688 units in two new residential buildings – a 200-foot 288-unit apartment building on Mission and a 470-foot condominium tower on Fifth Street and Natoma will have 400 market-rate units. The latest version of the project increases from 58 to 87 the number of below market-rate units in the 288-unit rental building. The additional units will target households earning 150 percent of area median income, about $150,000 for a family of four.

The additional affordable housing units funded by the project include 52 below-market-rate family units and 19 units for formerly homeless families in the 100-unit 8-story affordable family complex at Taylor and Eddy streets to be developed by the Tenderloin Neighborhood Development Corporation (TNDC), and land dedication and funding for 83 units of senior housing on the same block as 5M, at 967 Mission.

The increase in affordable units came after lengthy negotiations between District 6 Supervisor Jane Kim and Forest City. “Earlier this year, I worked with the Giants to establish 40 percent affordability for housing built on public land. Today, we are setting another new standard – 40 is the new 30 when it comes to affordable housing whether you’re building on public or private land,” said Supervisor Kim. “I support development in San Francisco but we have to build for San Franciscans. When the majority of San Franciscans qualify for affordable housing, that is who we should be building for and not just market rate luxury housing.”

“We are happy to support the 5M development agreement because it includes substantial affordable and workforce housing.”

“As the affordability crisis continues, we are happy to support the 5M development agreement because it includes substantial affordable and workforce housing,” said United Educators of San Francisco President Lita Blanc. “Such a balanced approach to housing is essential to ensure a place in San Francisco for teachers, paraprofessionals, and the families we serve.”

John Elberling of the community-based housing development nonprofit for the South of Market Neighborhood, TODCO Development Co., said, “Jane Kim has secured the best ever – so far – big development in SOMA history, with the safe and clean community park SRO tenants have asked for decades, the senior housing site and money to build it that Sixth Street has needed for decades, and on site rental units affordable to middle income employees of community agencies like TODCO. 5M directly helps us build a future SOMA where we still belong.”

Commenting on the Board of Supervisors’ approval, Alexa Arena, senior vice president for Forest City, said, “This milestone represents the start of our continued work with the community to ensure that the approved project is the best it can be over the long-term. The support we’ve received reinforces the neighborhood’s desire to add unprecedented levels of affordable housing, much needed open space, and youth and family benefits in SOMA. We’re grateful for the support of the community, Mayor’s office and Board of Supervisors and believe the project will be a thoughtful and beneficial addition to SOMA.”

The 5M project would be built in phases over five to eight years. A statement from Forest City said the developer will continue to work with the community and the City on designs, site programming and many other elements.

Forest City has already agreed to enter into a Project Labor Agreement with the Building Trades. The project will generate 1,200 construction jobs for union members. The developer has a strong record of using union contractors and union building trades members on previous projects in the city. An additional 3,150 permanent jobs will be created in office, security, ground floor retail businesses, and onsite property maintenance.

Efforts to increase affordable housing construction also picked up Dec. 1, when mayor Ed Lee and Board of Supervisors President London Breed called for a Charter Amendment for the Nov. 2016 ballot to require more affordable housing from private developers in new housing developments, especially large developments. A plan to increase the current requirement for 12 percent affordable units will be worked out by the Mayor’s office and housing stakeholders over the next several months.