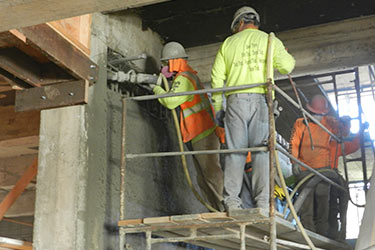 Ida B. Wells High School is undergoing a complete $12 million modernization courtesy of a 2011 bond measure. - Photo by Paul Burton

Modernization work at 34 San Francisco Unified School District sites covered by a project labor agreement between the Building Trades and School District is continuing during the 2015-2016 school session and progressing on schedule. San Francisco voters approved a $531 million Facility Bond Measure in November 2011 – the third and final installment of $1.3 billion in bonds to modernize and improve safety in SFUSD facilities. The School District extended and revised the PLA that covered earlier bond-funded projects in August 2013 to cover the new projects of $1 million or more.

Work is progressing this year, with many phases completed and seeing significant progress over the summer and into the school year.

The $12 million project at Ida B. Wells High School is a complete modernization of the century-old old building on Hayes Street. Built in 1911 and then known as the Denman School, the high school later became the Alamo Park Continuation High School, and was renamed in honor of the noted African-American civil rights activist and journalist Ida B. Wells in 1992. It is the oldest continuously operating school in the San Francisco Unified School District. Wells School now serves as an alternative school for students age 16 and older seeking to complete high school in a school with smaller classes, credit recovery programs and a supportive learning environment. During the renovation, the 169 students are attending classes at John O’Connell High School.

“The union workers are trained and have been through the apprenticeships, so they have the skills as professionals, and we get a better product.”

John Dutch, Project Manager for the Construction Manager, AECOM, gave Organized Labor a tour of the jobsite in September. Dutch said work started in December 2014 and will continue in phases until completion in April 2016. The modernization of the school is its first, and includes gutting the interior of the building and replacing old beams with new collector beams, adding shear walls and tying together structural elements to upgrade the building for seismic safety. Crews will also install completely new fire safety systems, new plumbing and electrical fixtures, and bring the building into compliance with the Americans with Disabilities Act with new ramps, rails, and a wheelchair lift to improve accessibility for students with disabilities.

Dutch said some of the exterior cornices were failing and will be replaced with newly fabricated sheet metal cornices that would be lighter, but retain the look of the existing exterior. Crews will also install new windows and doors.

Dutch said while the project didn’t have the same challenges as other school projects that have to work around the school day schedule, there were challenges because of the building’s age, and unforeseen issues that came up. He said having the Project Labor Agreement with the Building Trades was helpful. “It is good to be able to put a call in to a union hall and get more workers when we need to schedule extra work,” he said. Dutch said he appreciated having the “bench strength” of skilled union journeymen. “We were able to pull in some workers from IBEW Local 6” to handle some of the extra electrical work, he said. “The union workers are trained and have been through the apprenticeships, so they have the skills as professionals, and we get a better product.”

Dutch said one challenge was meeting local hire requirements and filling jobs because of the booming private sector construction ongoing in San Francisco and 34 SFUSD projects occurring this year. Between 20 and 30 construction workers are on the job, including laborers, carpenters, electricians, and iron workers. Between 50 and 60 are on the job during peak times.