Residential Projects at the Center of Pending Construction Flurry 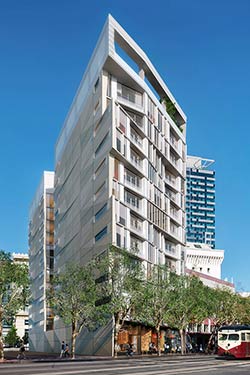 The San Francisco Planning Commission approved in June plans for a 109-unit, 12-story condominium project at 1554 Market Street, just west of Van Ness. This is one of a number of projects in the works at or near the intersection of Market & Van Ness. - Image Courtesy Trumark Urban

The area around Market Street and Van Ness Avenue is set to become the center of the next construction boom in San Francisco, with as many as 2,000 units of housing planned and set to start construction over the next few years.

Projects in this changing corridor include new housing at One Oak (across Van Ness at the site currently occupied by a Honda dealership), 1554 Market, 150 Van Ness, 30 Van Ness, and the Civic Center Hotel. New offices will also be built at the Goodwill store site at South Van Ness and Mission Street.

A look at some of the highlights in this evolving intersection:

San Francisco-based developer Build Inc. is seeking approval for a 400-foot-tall, 37-story residential high-rise just north of Market on Van Ness. The project has been in the works for about seven years. Build Inc. took over the project in mid-2014 and announced last October that the building had been redesigned to lessen the effects of wind and create more common space for residents. One Oak will have 308 units, marketed as luxury condominiums.

Build Inc.’s Managing Director, Lou Vasquez, said the developer is aiming to have the project approved by the San Francisco Planning Commission in May or June of 2016, and to begin construction in 2017. Vasquez said Andy Ball, President and CEO of the West Region for Suffolk Construction, has been involved in the pre-construction planning and Suffolk would likely be the general contractor for the project. He said Build Inc. uses general contractors who are union signatory contractors. The developer is also working on making improvements around the project site.

One Oak was originally called One Van Ness; the site currently includes a parking lot between Market and Oak streets and a doughnut shop at the corner of Market and Van Ness. If approved, it will be among the first of several projects that will come on line over the next few years near Van Ness and Market.

Adam Tartakovsky, Crescent Heights’ vice president of development, said that while plans are still in development, “the Honda site is the culmination of a lot of the things we’ve learned on national projects and Nema [1401 Market].” The developer did not return phone calls seeking more information about the timeline for the project but Crescent Heights has begun to promote the project on its website. The developer notes that the project will include 650 rental units, direct station access to Muni, and 35,000 square feet of retail space that will open in 2019 or 2020.

The San Francisco Business Times reported that 1554 Market and a second 220-unit project at 1601 Mission “… would bring hundreds of new units to the western edge of the Mid-Market area, a historically gritty neighborhood that has attracted new investment as tech companies open new offices.” Trumark Urban’s managing director Arden Hearing told the Business Times, “The transition largely catalyzed by the mayor’s efforts is just phenomenal. Twitter’s a big part of that. Dolby’s a part of that.” All the new projects planned for the neighborhood tout the proximity of high tech companies as a selling point for new residents.

1554 Market Street will include 13 below market rate condos and 4,864 square feet of retail. The design includes two towers with a shared courtyard, connected by a pedestrian sky bridge. The buildings, designed by Handel Architects, will also feature sustainable design elements, including native landscaping, a dedicated City CarShare space, and an electric vehicle charging station.

Trumark Urban is currently building a 91-unit condo project at 645 Texas St. in Dogpatch and the 70-unit project at 346 Potrero Ave. in the Inner Mission near Potrero Hill. Both are being built with all union building trades workers.

Emerald Fund won approval for a 13-story apartment building at 150 Van Ness in April. The site next to the Emerald Fund’s 418 unit tower at 100 Van Ness will feature 420 apartments, with 50 for rent priced below market rate. Emerald Fund completed the conversion of the former California State Automobile Association office building at 100 Van Ness to an apartment complex earlier this year. Construction started in October 2012 and was completed on schedule by the all-union construction crews.

Reporting on the opening of 100 Van Ness and the new projects slated for the area, the San Francisco Business Times noted that, “Emerald Fund (and equity partner National Electrical Benefit Fund) can’t claim total credit, of course. The area’s rebirth is due to a decade-long zoning process, a successful payroll tax break for technology companies and a booming job market in San Francisco.” City planner Kearstin Dischinger, who worked on the Market-Octavia planning process, told the Business Times that the new developments are “… a nice transition to the Civic Center area. What we imagined this to be is a punctuation at the end of the downtown corridor of Market Street.” The Market and Octavia Area Plan calls for a high-density mixed-use neighborhood around Market Street’s transit connections.

Demolition of the existing eight story office building and surface parking lot at 150 Van Ness is currently underway. The apartment building will also have 9,000 square feet of retail space.

Strada Investment and the Group Community Housing Partnership plan to build a 575-unit project to replace the Civic Center Hotel owned by the Plumbers and Pipefitters Local 38 pension trust on Market Street at 12th Street. The project includes affordable housing units for low income and formerly homeless individuals, and support services for tenants. Construction could start by the end of 2017, with initial occupancy 20-24 months later.

The office building owned by the City on the northeast corner of Market and Van Ness currently houses Department of Public Works offices and a Walgreen’s store. The City is taking bids from developers to replace the building with a new 40-story residential tower. The Business Times reported that three of the finalist bidders are Related California, Carmel Partners, and Rubicon Point Partners. Related California purchased the 2.3-acre site at South Van Ness and Mission where Goodwill now has a store and offices in 2014. The Business Times reported that the sale of 30 Van Ness, “will help the city repay $32 million of debt on the building and help finance construction of 450,000 square feet of city offices that will be part of a mixed-use development on the nearby Goodwill site.”

The 30 Van Ness and Goodwill site projects could start construction in 2017.