5M Gets Go-Ahead from Planning Commission 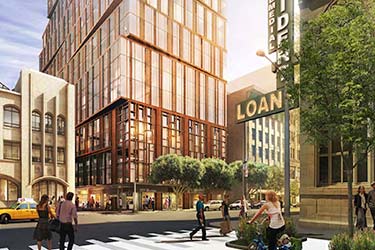 San Francisco’s planning commission voted on September 17 to approve Forest City Development’s 5M project, located at Mission and Fifth streets. After hearing six and a half hours of public comment, the Commission rejected a motion to continue the approval process to a future meeting on a 4-3 vote, then approved the environmental reviews and zoning changes required to OK the project on a 5-2 vote. Commissioners Cindy Wu and Kathrin Moore voted against approval.

Commissioners Michael Antonini and Rich Hillis noted that the project has come before the Commission many times over the last three years, and the project has been in the works since 2008. Forest City has held a series of public meetings to get feedback from neighbors, and earlier this year modified its plans to include more affordable housing.

Antonini said it did not make sense to continue the approval, and said that while the project is privately funded, delaying approval could jeopardize some public funds from the State’s cap and trade program that need to be secured.

The 5M development includes two new residential buildings: a 200-foot 288-unit apartment building on Mission with 20 percent of the apartments set aside for families earning 50 percent of area median income; and a 470-foot condominium tower on Fifth and Natoma streets will have 400 market-rate units. In addition to including 58 affordable apartment units on-site, Forest City proposes to fund the construction of additional affordable units through developer fees. This includes a contribution of land for 83 senior housing apartment units at a parking lot on Mission Street near Sixth and $18 million that will fund 71 units in the 100-unit, 8-story affordable family complex at Taylor and Eddy streets to be developed by the Tenderloin Neighborhood Development Corporation (TNDC).

“Building permanently affordable housing is the best strategy to prevent displacement, but it cannot be done without resources,” Falk said. “5M isn’t the only answer, but it is one lever, one source for us to employ in a long-term strategy to address displacement. It sets the standard for every big project that comes through San Francisco.”

Several speakers from the SoMa Action Committee opposing the project expressed fears that it would lead to higher rents as property values increase, displacing long time residents and small business owners. Planning staff noted that the project would not lead to the direct displacement of residents. They found that of the 8,000 housing units within a quarter mile of the 5M project site, 6,000 are newly built below-market­-rate units, supportive housing or other properties where residents aren’t at risk of displacement. Some members of the public who spoke in support of 5M also cited a City Economist report that found that building new market rate housing would not lead to higher property values nearby and cause the indirect displacement of neighbors.

Other speakers pointed out that the housing crisis will worsen if more housing is not built, and that continuing the approval process would add years to the project and exacerbate the problem of housing affordability.

Many of the opponents to 5M are Filipino residents and activists who are fighting displacement. Some called for establishing a Filipino Heritage District, which Commissioner Antonini noted was not an issue before the Planning Commission and could be brought up to the Board of Supervisors, which is expected to consider 5M before the end of this year

Several Filipino activists with local youth organizations SoMa Youth Collaborative and United Playaz spoke in support of 5M and noted that Forest City had gone a long way to craft a good project by meeting with neighbors and activists and had made a substantial commitment to supporting youth and arts programs. Over 12,000 square feet of office space will be dedicated to arts, cultural and educational uses, and open space will be programmed to include community arts and cultural events. A statement from Forest City noted that, “Additional funding will be provided for youth development and wrap-around services for students of Bessie Carmichael, the only elementary and middle schools in SoMA. Support for teacher training and professional development will also be provided.”

As Planning Commissioners prepared to vote on the project, a small group of protesters began chanting and disrupted the meeting, delaying the agenda for two hours.

Forest City’s senior vice president, Alexa Arena, issued a statement after the vote, saying, “The Planning Commission approval was a significant milestone in favor of providing localized benefits of 33 percent affordable housing, youth and arts programs and open space for S0MA, and we’re excited to continue our work on the project with the community and the city.”

Forest City also presented letters of support for 5M from over 150 neighborhood residents and business owners and non-profits.

The developer hopes to win approval from the Board of Supervisors by late November and begin construction in 2017. The project would be built in phases over five to eight years.

Forest City has already agreed to enter into a Project Labor Agreement with the Building Trades. The project will generate 1,200 construction jobs for union members.