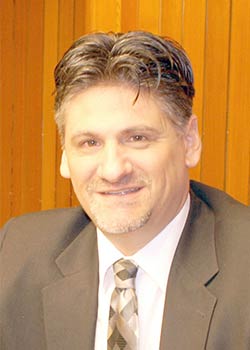 Mazzola will succeed his father, Larry Mazzola Sr., who is retiring after several terms as SFBCTC president. Mazzola Jr. touted his extensive experience as a Business Manager/ Financial Secretary Treasurer for Local 38 and as a delegate to the San Francisco Labor Council and the San Francisco, Sonoma and Marin building trades councils. Mazzola also served on several plumbers union committees for training, and as a member of the Board of Trustees of UA Local 38’s Pension, Health and Welfare Trust Funds.

Before the meeting, Mazzola and Lavery handed out campaign materials and spoke with union delegates. Delegates then packed the Electrical Workers Local 6 union hall for the election.

Council Executive Secretary-Treasurer Mike Theriault explained the rules of the election and how votes are allocated to each affiliated union, in proportion to the number of dues-paying members. Unions with roughly 200 members had five votes, while the largest unions with membership numbers over 1,000 had between 11 and 15 votes. Kevin Hughes of IBEW Local 6 served as judge, with Terry Dunnigan, Ironworkers Local 377; Steve Tucker, Roofers Local 40; and Tony Tofani, Painters and Allied Trades District Council 16, serving as tellers to check credentials and tally the vote.

Before the vote, Lavery asked to speak to the delegates. Pat Mulligan of Carpenters Local 22 said that even though voters had received campaign information, for many it was their first meeting and it would be good to have the candidates address them. A motion was made and passed to allow each candidate a few minutes to make their case.

“I am optimistic that I can help mitigate any disagreements within the Council, and guide the Council to work together as one for the betterment of us all.”

Lavery worked as a crane operator for 17 years and now serves as a trustee of the San Mateo County and San Francisco building trades councils in addition to managing the OE Local 3 San Mateo County District. He said he wanted to build unity among the unions of the SFBCTC.

“We should speak as one voice,” he said. “Unity will increase access to jobs for our members.” Lavery’s campaign platform called for expanding project labor agreements in the private sector, ending the unfair advantage that non-union contractors have against some sub-crafts through off-site fabrication on prevailing wage jobs, and “deeper and more meaningful collaboration between the basic crafts and the sub-crafts” among other issues and goals. Lavery said he would pressure contractors who are signatory to the Operating Engineers to use union subcontractors. “We need more PLAs, and a city-wide PLA,” he said.

Mazzola said he was running for president for the same reasons and goals as Lavery. He said issues and conflicts between basic crafts and sub-crafts “shouldn’t be there,” and said, “I am optimistic that I can help mitigate any disagreements within the council, and guide the council to work together as one for the betterment of us all.” Mazzola said he had formed good working relationships with most of the delegates and unions of the Council during his 21 years as a delegate. “I have also established good relationships with the current mayor and a majority of all San Francisco politicians, as well as many state politicians, ensuring a strong labor voice at all levels of local and statewide government.” Mazzola said the relationships he had formed, both within the labor movement and outside, would help the SFBCTC “build a strong future for San Francisco and for all our members.”

After the brief speeches, delegates lined up and cast their secret ballots. Each campaign was allowed an observer to watch the vote count. After the result was announced, Mazzola thanked the delegates and said he would work hard to represent all the members.

Theriault said the turnout for the election and the participation of delegates was a great example of union democracy in action.