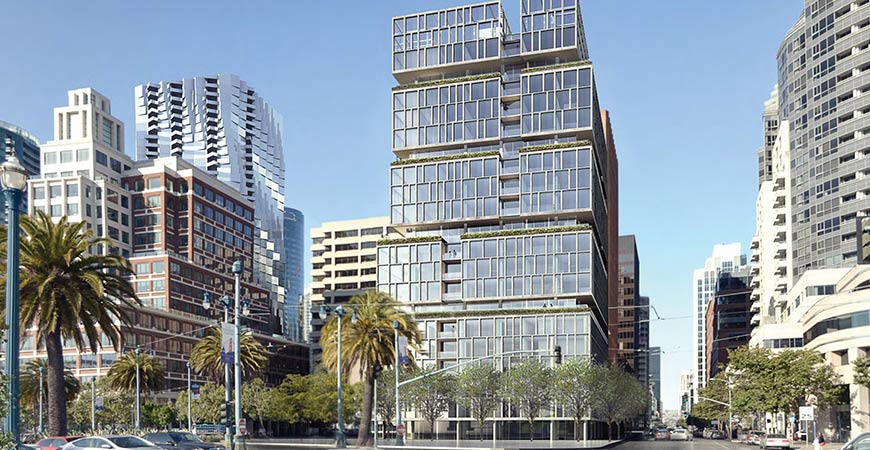 Developer Paramount Group has scaled down is proposal for 75 Howard St. from a 292-foot tall, 25-story structure with 159 units to the current 220-foot, 20-story, 133-unit version. - Image Courtesy Paramount Group

Scaled-down tower will go before the Planning Commission in September

Developer Paramount Group is seeking approval for its condominium project at 75 Howard St. Paramount scaled down an earlier version of the residential building from a 292-foot-tall, 25-story structure with 159 units to the current 220-foot, 20-story, 133-unit version after facing opposition from some local residents. The project will go before the San Francisco Planning Commission on Sept. 3.

If approved, work on the project would begin next spring or early summer with the demolition of the existing 550-space, eight-level, commercial parking structure at the site. Marce Sanchez, Paramount Group’s vice president for construction, told Organized Labor that Paramount hasn’t chosen a general contractor yet, but the company will engage a union contractor. “Paramount Group’s policy is to always go with all union labor for the construction because of the high quality of the work,” Sanchez said. “We take pride in the quality of our buildings and use union building trades in our projects in D.C., New York City and San Francisco.” The project will create 250 full time jobs during the course of construction.

“(Our) policy is to always go with all union labor for the construction because of the high quality of the work. We take pride in the quality of our buildings and use union building trades in our projects in D.C., New York City and San Francisco.”

Sanchez said, “We were hoping the funds could be directed to the TNDC project at Taylor and Eddy. We were disappointed that we couldn’t do a taller building and be able to work with TNDC to build more affordable units, but we can still make something work.” Paramount will also continue to work with the Mayor’s Office of Housing and Community Development to explore ways to support TNDC’s project.

In a letter endorsing the project, Tim Colen, Executive Director of the San Francisco Housing Action Coalition (SFHAC), wrote, “We believe the project has merit and aligns with our mission of increasing the supply of well-designed, well-located housing in San Francisco. We’ve also expressed our disappointment that you are unable to pursue a taller building that would deliver more community benefits and contribute significantly more affordable housing. Misguided opposition from neighbors to the building’s original height and concerns over shadows cast on Rincon Park prevented your team from delivering a much better project for San Francisco. Together with the usual frustrating delays that seem intrinsic to our City’s ‘process’ make this project a missed opportunity.”

Alex Clemens of Barbary Coast Consulting, which is working with Paramount on public outreach, noted that, “Building in San Francisco is a difficult and time consuming process. Paramount has met with and listened to people over the past three years to make a project that will be great for current San Francisco residents and future San Franciscans.” Clemens said that, along with meetings with community groups, the mayor’s office and Supervisor Jane Kim, Paramount has met with a wide range of groups, from housing activists to the management of the Ferry Building Farmer’s Market. “We are taking down 550 parking spaces so we have agreed to open up 100 spaces for parking at One Market Plaza, which is closer to the Ferry Building than the parking structure we are eliminating,” Clemens said. He noted that, “We will replace an old parking garage that would never be built now with a modern, sleek building that is respectful of the neighborhood.” The Paramount Group is the owner of One Market Street and 50 Beale Street.

While some articles reporting on the opposition to 75 Howard have compared it to 8 Washington, which was stalled after a referendum on the heights of waterfront developments, Clemens pointed out that, “It is important to note that we are not 8 Washington – this isn’t Port property or public land or parks. We are a single, private lot,” and so not subject to waterfront height limits or approvals through the regional and state agencies that oversee public coastal lands. “We will build a project that is fully code-compliant with existing zoning for the area,” Sanchez said.

Sanchez added that eliminating the 90-foot tall parking garage that is a relic of a more car-centric time and replacing it with a 20-story glass and stone building will enhance the area. Colen noted that, “Housing is a far better use of this site and will help enliven a neighborhood that would greatly benefit from having more residents.”

Designed by architects Skidmore, Owings & Merrill, 75 Howard will be an energy efficient building with a mix of one-, two- and three-bedroom condos and 5,824 square feet of ground floor retail space. It will have 123 bicycle parking spaces and two parking spaces for car-share services. The site is close to the Embarcadero BART Station, Muni stops and the Transbay Transit Center, in a walkable neighborhood.

“We believe it will be the first LEED Platinum certified condo project in the City,” Sanchez said. “It will have solar panels on the roof and water recycling. We have a whole checklist of items that will make it LEED Platinum” – from energy efficient design and features, to the proximity to public transit. “We are anxious to see it growing.

“We expect that the removal of the garage and replacing it with this new residential building will bring about positive change for the Embarcadero corridor, local businesses, restaurants, residents, employees and visitors alike.”