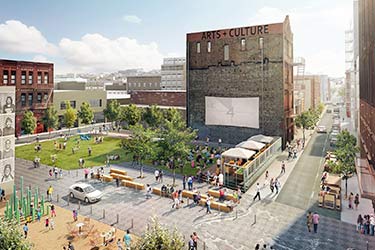 Forest City Development recently modified its plans for the mixed-use project at Fifth and Mission streets, known as 5M. The developer has held a series of public meetings to build local support for the project and get feedback from neighbors, similar to meetings held for neighbors of Forest City’s Pier 70 project, which succeeded in winning community backing.

“5M is a privately funded project that offers a broad array of community benefits focused in the immediate area to create both stability and new opportunities for current residents,” said Audrey Tendell, Forest City 5M Project development director. “We’ve been working with the community for six years on 5M. It achieves 33 percent affordable housing goals, builds much needed public open spaces, and funds important arts, youth development and local workforce development programs. On top of that, it will generate thousands of construction and permanent jobs.”

The latest version of the plan for the four-acre site around the historic San Francisco Chronicle building, which has been in the works since 2010, includes two new residential buildings – one with 288 units and one with 400 units – and a 614,000-square-foot office building. The office complex would consist of two towers at Fifth and Howard streets. An earlier version of 5M featured a third office tower with 226,000 square feet of space. Forest City’s revised plan calls for 55,000 square feet of publicly accessible open space, more than in earlier versions.

A key change for Forest City is the developer’s commitment to offering one-third of the housing at below market rates. According to Forest City, through on-site housing and funding, the project will provide approximately 212 affordable units – one-third of the project’s units. All units will be restricted to deeply affordable rent levels – at or below 50 percent of area median income.

San Francisco Mayor Ed Lee said 5M would be the first private development to meet the goals of Proposition K, the 2014 ballot measure that calls for 33 percent of new housing built to be affordable to low and moderate income families. The 470-foot condominium tower on Fifth and Natoma streets will have 400 market-rate units and the 200-foot 288-unit apartment building on Mission will have 20 percent of the apartments set aside for families earning 50 percent of area median income (approximately $50,000 for a family of four). In addition to including 58 affordable apartment units on-site, Forest City proposes to fund the construction of additional affordable units through developer fees. This includes $18 million that will fund 71 units in the 100-unit 8-story affordable family complex at Taylor and Eddy streets to be developed by the Tenderloin Neighborhood Development Corporation, and a contribution of land for 83 senior housing apartment units at a parking lot on Mission near Sixth Street.

Forest City has also agreed to enter into a Project Labor Agreement with the Building Trades. The project will generate 1,200 construction jobs for union members. The developer has a strong record of using union contractors and union building trades members on previous projects in the city.

An additional 3,150 permanent jobs will be created in office, security and ground floor retail businesses, and onsite property maintenance. The developer will also fund transit improvements through the $58 million in developer fees and support arts, culture and educational opportunities in the South of Market area with an additional $10 million in benefit fees. Over 12,000 square feet of office space will be dedicated to arts, cultural and educational uses, and open space will be programmed to include community arts and cultural events.

The historic buildings in the project area will also be preserved, including the Camelline Building on Natoma Street built in 1923 and the Chronicle building at Mission and Fifth streets. Forest City also proposes to renovate the 1924 Dempster Printing Building on Minna Street and donate it for community nonprofit programs.

An informational hearing before the Planning Commission is scheduled for July 23, with more hearings set for this fall. The developer hopes to win approval from the Board of Supervisors in November and begin construction by the fall of 2016.

“Our goal is to create a vibrant place that connects downtown and SOMA for people of all ages and backgrounds,” Tendell said. “To accomplish that, 5M will have programmed open space and a diversity of housing and neighborhood serving retail, while respecting the history and character of the site. We’ll be successful if it is a place where seniors, youth, families and workers are actively enjoying the public realm, including the play areas, arts programming, and outdoor markets.”