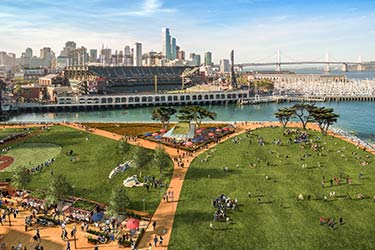 The San Francisco Giants’ Mission Rock project development will create 13,500 new construction jobs over six years and as many as 11,000 permanent jobs. The project includes a green space for festivals and public events.. - Image Courtesy Steelblue/Perkins + Will, San Francisco Giants

Last month, San Francisco Giants ownership unveiled a revised plan for its Mission Rock development south of AT&T Park. The team also kicked off a campaign to win voter approval for the project through a ballot measure. The Mission Rock measure needs 9,702 signatures before July 6 to qualify for the November 2015 ballot. The measure is in response to Proposition B, which requires voter approval for waterfront developments on port property that exceed current height limits.

The Mission Rock site is currently used as a parking lot for Giants games.

“The Mission Rock Initiative is the culmination of eight years of extensive neighborhood outreach and community planning to transform this surface parking lot into an asset for the community,” Giants President and CEO Larry Baer said in a statement. “We are eager to engage with San Francisco voters to share our community’s vision of open access along the waterfront, new jobs, neighborhood serving retail, new parks and an unprecedented level of affordable housing.”

The project as proposed will transform the 28-acre site located across the China Basin Channel from AT&T Park into “a mixed-use neighborhood featuring waterfront parks, affordable housing, new jobs, convenient transit and parking and the restoration of historic Pier 48,” according to the team in a press release on MLB.com. The project will include approximately 1,500 new rental apartments, with one-third priced as affordable for low and middle income individuals and families. The team points out that this is the highest percentage of affordable units ever proposed for a private project in San Francisco, more than doubling an earlier version of the project’s 15 percent affordable housing goal.

“The Mission Rock plan will set a new standard for affordable housing in San Francisco and will provide support to those in our community who are most in need,” Delancey Street Foundation President Mimi Silbert said. “Delancey Street was one of the first developments in this neighborhood and the Giants have worked closely with us and the entire neighborhood on plans for Mission Rock so that it will become one of the most exciting and vibrant places in all of San Francisco.”

Christine Falvey of the Mayor’s Office said in a statement that the plan is in line with Mayor Lee’s goals “to help support low and middle income families.”

The Giants also propose to renovate Pier 48, where Anchor Brewing – San Francisco’s oldest and largest manufacturing business – would expand its operations. A public boardwalk will be opened around the historic pier. Mission Rock will also feature eight acres of open space and parks; a waterfront promenade and a green space where large festivals and public events could be held; and a “green town square” surrounded by housing, shops and cafes with 1.5 million square feet of commercial space. The retail plan calls for small retailers rather than large chains. The team pledged to offer below-market rents for nonprofit and arts organizations and dedicated space for small local manufacturing businesses along a waterfront “Maker’s Row.”

Of those apartments to be classified as affordable

The development will create 13,500 new construction jobs over six years and as many as 11,000 permanent jobs. The Giants and the Building Trades are working to fulfill the Giants’ promise of a project labor agreement. Construction of Mission Rock would take place in four phases. The Giants had originally partnered with the Cordish Companies to develop the site, but will now serve as the sole developer. Union contractors Hathaway Dinwiddie and Nibbi Brothers have been involved in the pre-construction planning.

The Mission Rock plan took shape over the last eight years through a community planning process, and has been modified from the original version proposed in 2008 and a plan announced in early 2013. The project now features new buildings on only 10 acres of the 28-acre site, with heights ranging from 90 to 190 feet for office and retail uses and 120 to 240 feet for rental housing. The earlier proposal had buildings as tall as 380 feet.

Supervisor Jane Kim announced June 2 that she would introduce a competing ballot measure that would allow heights up to only 120 feet at the Mission Rock site, and called for more community benefits. Her proposal called for up to 50 percent of the housing units be affordable. The Giants’ Executive Vice President of Communications, Staci Slaughter, told the San Francisco Chronicle that Supervisor Kim’s ballot measure would “significantly put the project in jeopardy,” if it passed and that “the taller buildings are necessary to subsidize the below-market, affordable housing units.”

The project has gained strong support from leaders of neighborhood and community groups, including the Mission Bay Citizens Advisory Committee and South Beach, Rincon Hill, Mission Bay Neighborhood Association, as well as former State Senator John Burton. The development could generate more than $1 billion in revenue for San Francisco through retail sales taxes and property tax revenue for the port and city.

State Senator Mark Leno offered his support for the plan, noting that it was uncommon for a project to include 33 percent affordable housing. He pointed out that, “The Giants have been working collaboratively with its neighbors for many years” on plans for the area, and said, “The historic brewery, jobs and neighborhood-serving shops and cafes will greatly enhance this new neighborhood. It will be exciting to see this great vision come to life.”