‘The Right Choice is Always Safer’

HerreroBoldt Emphasizes Safety at May Event 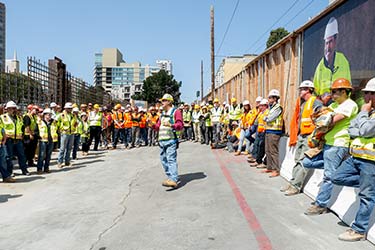 “We want our workers to know that when they have to make a choice between doing something faster, cheaper or safer, the right choice is always safer,” Herrero told Organized Labor at a Safety Week event at the site of the Van Ness and Geary campus of the California Pacific Medical Center last month. “If they see an unsafe condition, they have our full support to tell their supervisor, ‘I don’t feel comfortable with this situation. It’s not safe.’”

Herrero Builders teamed up with the Boldt Company to create HerreroBoldt for the two companies’ construction of the Van Ness and Geary Hospital and other Sutter medical projects such as Saint Luke’s hospital campus. HerreroBoldt wants world class safety for its workers on its projects.

To emphasize safety, the joint venture created a Safety Leadership Group comprised of the safety officers of all the companies and trade-partners working for HerreroBoldt. The safety week event included a presentation of the latest fall protection by Ernie Miller of Miller Fall Protection. Cal/OSHA Chief Juliann Sum and Nick Gleiter of the Cal/OSHA consultant division introduced themselves to the crowd and talked about the importance of safety. About 75 workers were present.

Part of HerreroBoldt’s safety strategy and general work philosophy is fostering a cooperative culture where the different companies are not seen as sub-contractors but as “trade-partners.” Their full participation and initiative is encouraged. A safety leadership group meets regularly, and suggestions are acted on.

“On this job site you don’t feel like you’re a sub-contractor being dictated to, you can talk to the general contractor and if you have an issue they address it right away and fix it,” said Bryan Bishop, the safety coordinator from one of the trade partners Herrick Steel, in describing the relationship.

Workers can bring safety issues up to their foreman or, if non-urgent, the safety officers have report forms.

“No one is seen as being a troublemaker for bringing up safety issues,” Bishop said. “We ask for their name and the company on the form but they can always be anonymous. The forms have helped out quite a bit. When people see that the issues that other people have raised are being addressed, they want to join in. Not everybody sees the same thing you see. More eyes watching out makes for better planning.”

At this point the steel girders are rising up out of the ground at Van Ness and Geary. All the trades have been working next to each other in a giant pit several floors deep, and communication and coordination between the trades for the shared space has been one of the main issues addressed at the meetings.

“We’re limited on space and that is something we have to deal with,” Susanne Beckwith of Rosendin Electric said. “Coordinating where material can go so you’re not in someone else’s way or creating a hazard for another trade partner is a major safety concern. At our biweekly meetings we discuss all the different issues on the project that each trade is having. We also share the good things. We give recognition to individuals for their outstanding efforts of going above and beyond to improve production, quality and safety.”

The successful collaboration between labor and management impressed Sum, who hopes it will be a model for the rest of the state: “We want to spread the culture of safety throughout California and make safety a fundamental part of the job.”