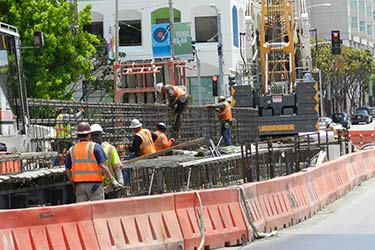 Local hiring policies have been utilized at sites throughout the city, including the Central Subway project. - Photo by Paul Burton

San Francisco’s guiding principle of ensuring that a sizable amount of workers hired for public construction projects are local will be reviewed over the next two years.

The city’s Local Hire policy will continue to require that 30 percent of workers on public construction projects are local for the next two years. The Board of Supervisors voted to extend the legislative review period of the policy for an additional 24 months in March and to maintain the current requirement of 30 percent during the extended review period. The city’s local hiring policy was enacted in December 2010 and mandated that 20 percent of workers be local hires the first year, then increasing every year by 5 percent.

The mayor’s Construction Workforce Advisory Committee, which includes representatives of the Carpenters, Laborers, IBEW and union contractors, recommended the extension of local hire rules to allow for further analysis of the policy’s impact, including the recent expansion to cover private development on City-owned property. The local resident apprenticeship requirement has remained unchanged at 50 percent.

The 2014-2015 annual report from the Office of Economic and Workforce Development (OEWD) found that “the fourth year of the Local Hiring Policy was marked by continued growth in the local construction industry. Over the past two years, Local Hire projects have supported more than 3 million work hours – almost three times the number of work hours recorded during the Policy’s first two years.” The local hire policy has applied to 263 public construction projects for Public Works; Recreation and Parks; Metropolitan Transportation Authority; San Francisco International Airport; and the Public Utilities Commission. San Francisco residents made up about 18 percent of the 14,915 building trades workers on local construction projects. The 2,796 local hires were from throughout the city, with large percentages in the Bayview-Hunters Point, Visitacion Valley, Mission and Excelsior neighborhoods.

The OEWD report showed that in the policy’s most recent year, the local hire requirements were met in many trades. Broken down by work hours, the Laborers, Electricians, Operating Engineers, Carpenters, and Plumbers all had over 50 percent represented by local hires. The percentage was below 30 percent for several other trades. The report found that most construction workers on the projects live in Alameda County and Contra Costa County, where housing costs are lower than in San Francisco.

While the policy has been successful, not all projects are able to meet local hire requirements, in part because of more work now available in private sector developments. The OEWD report notes that, “Overall, local workforce participation across most trades has continued to meet the Policy’s requirements. However, there is the potential for a shortage of skilled local workers in the coming years, due to the rapid increase in construction activity. Already, there are indicators that local apprentice numbers are stagnating. Pressure from private development, the initiation of additional projects subject to the 30 percent local hiring requirement and the expansion of Local Hire have all reinforced the need to expand workforce training citywide.” The OEWD adds that “Developing a strong pipeline of skilled workers to meet the growing demands of the construction industry remains the primary challenge of the Local Hiring Policy for Construction.” The OEWD will work with the San Francisco Unified School District and the San Francisco Community College District to enhance and expand training in specialized trades for local residents in order to strengthen construction career pathways.

Mayor Ed Lee noted in the report that, “Last year, San Francisco once again led the nation in job growth, providing opportunities in every sector, including construction. Today, we have a record low unemployment rate thanks in part to growth in the construction industry. The cranes that populate the City’s skyline and the hundreds of public works projects revitalizing local neighborhoods are a sign of the City’s rising prosperity and an indication that construction jobs will continue to provide opportunities for residents and local businesses.”

Lee added that, “Just four years ago, the need to attract jobs and investment in our City and kick-start the economy was urgent. We had a crisis in joblessness. I’m very proud that as a result of our policies, people in San Francisco are working again, economic opportunity is back, and we’ve given people a paycheck to support themselves and their families. Creating and maintaining San Francisco jobs benefits all our residents and local businesses.”