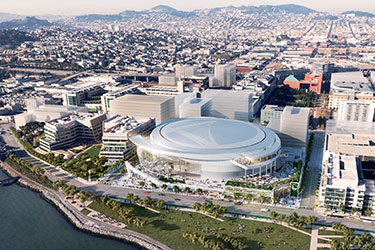 The Golden State Warriors released new renderings of a two-building office complex to be built adjacent to their planned arena in Mission Bay. Last year, the Warriors’ ownership team purchased the 12-acre parcel at Third and 16th streets from Salesforce.com, after the tech company abandoned its plan for a campus there.

The Warriors Arena and Mixed-Use Development area is entitled for one million square feet of Commercial/Industrial development. Along with an 18,000 seat arena and event space, the project will include 580,000 square feet of office/lab space, 100,000 square feet of retail space, a 3.2 acre public plaza on the west side of the arena, and 950 parking spaces for office tenants and visitors. Jesse Blout from development consultant Strada Investment Group, told the San Francisco Business Times that the location has an “opportunity to be a town center for this part of the southeast part of the city.”

Last year, Warriors co-owner and CEO Joe Lacob said, “We believe Mission Bay is a perfect fit. It is a wonderful inland site in a dynamic part of the city that is convenient for fans from all over the Bay Area.” Lacob noted that the arena will be privately financed and on private land, which he said is virtually unprecedented among major league sports and entertainment facilities. The pre-construction contract for the arena was awarded to the union contractors Hunt Construction Group and Webcor, who each have extensive experience building arenas and stadiums.

As part of the overall Mission Bay redevelopment, the project will be covered by a Project Labor Agreement with the Building Trades, with potentially over 2,000 construction jobs created over the three years of construction and 1,757 permanent jobs created. The PLA for Mission Bay Redevelopment Area projects requires that 50 percent of hires are local individuals, 6.9 percent are women, and 25 percent minority.

The Warriors unveiled the new designs for the office complex at a recent meeting of the Mission Bay Citizens Advisory Committee. The group has been engaged in a community planning process for the arena development for several months, and members were surprised that a political consultant hired to lead a group opposed to the arena hijacked its meeting April 30.

“We believe Mission Bay is a perfect fit. It is a wonderful inland site in a dynamic part of the city that is convenient for fans from all over the Bay Area.”

Jack Davis, described by the San Francisco Chronicle as “once the biggest political consultant in town and still a force to be reckoned with in semi-retirement,” now represents the Mission Bay Alliance – a new group that hasn’t disclosed its funding sources but which includes former officials with UCSF. Davis reportedly refused to limit his comments to the allotted time for the public and asserted that the Mission Bay Alliance had “put together sufficient enough money to hire the very, very best CEQA attorneys to go over the entirety of the Mission Bay master plan.” The project must still go through the California Environmental Quality Act approval process. At issue for opponents is the potential impacts of increased traffic on the nearby UCSF hospital complex and the number of parking spaces for the new offices. The newly minted opposition group includes former UCSF Senior Vice Chancellor Bruce Spaulding. The Chronicle reported that, “Although Spaulding stopped short of saying the group was prepared to take its case to the voters – a la the ‘No Wall on the Waterfront’ effort that knocked off the 8 Washington condo development – [spokesman Sam] Singer said that was ‘absolutely’ a possibility.”

Warriors spokesman P.J. Johnston pointed out that, “The San Francisco public overwhelmingly supports the Warriors’ move to Mission Bay” and said the opponents “don’t appear to represent UCSF, and certainly not the community.”

At the April 30 meeting, several Mission Bay residents spoke up in support of the Warriors’ project. Speakers who followed Davis expressed support for the community planning process that is already underway as a way to address concerns over traffic impacts.

If plans are approved, the Warriors complex will break ground this fall and the arena will open in time for the 2018-19 basketball season.