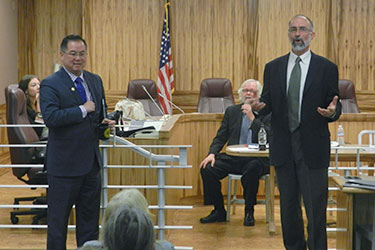 Assembly Bill 219 (Daly) will close a loophole in prevailing wage law to cover ready-mix concrete drivers on public works projects. San Francisco Building and Construction Trades Council Secretary-Treasurer Michael Theriault said AB 219 would help to ensure that state funds are invested in good jobs that rebuild the middle class and revitalize our economy. Chiu said he supported AB 219 and that, “It doesn’t make sense to have a double standard for paying prevailing wages.” Gordon added, “It doesn’t make sense that the guy who drives the concrete truck to the jobsite gets less because he is employed by the concrete company.” Ting and Mullin also said they are 100 percent in favor of prevailing wages. Senators Hill and Leno also expressed support for the bill. AB 219 passed in the Assembly Labor Committee April 22.

Assembly Bill 251 (Levine), which protects prevailing wage by creating specific thresholds under which the “de minimis” exemption applies, was passed by the full Assembly in April. Some private projects receiving public subsidies are not required to pay prevailing wage if the subsidy is deemed to be “de minimis” (insignificant) by the Department of Industrial Relations. State Building Trades Council Political Director Cesar Diaz said existing law doesn’t specifically define that threshold, so subsidies that are a relatively low percentage of the entire cost on large projects can amount to millions of taxpayer dollars – yet the project still remains exempt from prevailing wage. “If the subsidy is 2 percent of $100 million, it isn’t insignificant,” Diaz said. “We are saying that if you are choosing to accept public money, you should pay the prevailing wage.” AB 251 would specify that a public subsidy to a private project is “de minimis” only if the amount is less than $25,000 and less than one percent of the total project cost. It ensures that when significant taxpayer dollars are spent subsidizing a construction project, that the workers on those projects receive the prevailing wage they deserve.

AB 1308 (Perea) would protect existing programs that supply and graduate apprentices. It requires that in order for a new program to be established and approved, existing programs do not have the capacity to dispatch enough apprentices to employers. Ting said he supports the bill and that, “I’m very supportive of apprenticeship programs; they are a good way to get people out of poverty.” Mullin said he had “no hesitation” supporting the bill and that he is committed to apprenticeship programs. Gordon and Chiu also support AB 1308. The Assembly approved AB 1308 by a 53-23 vote.

In the Assembly Education Committee, three bills moved forward, over the objections of contractors associations and the Associated Builders and Contractors (ABC), incentivizing the use of Project Labor Agreements.

AB 566 (O’Donnell) mandates prequalification of contractors and subcontractors on K-12 facility construction projects above $1 million regardless of the funding source. It requires that all lease-leaseback contractors and subcontractors hire a skilled workforce. AB 1358 (Dababneh) authorizes and extends until the year 2025 design-build authority for school districts. It requires contractors and sub-contractors to employ journeypersons who have graduated from state approved apprenticeship programs. SBCTC’s Diaz explained that the State has a program to help fund school construction and that local districts can now pass their own bonds with just a 55 percent vote under provisions of Prop. 39. “That’s great, but we need to make sure that the entity is responsible,” he said, so that school districts have incentives to enact project labor agreements. “PLAs help school districts,” Diaz said. “The Building Trades bills help provide school districts with the efficiency to have a skilled and well-trained workforce. They provide incentives to use PLAs, which further helps the local economies through local hiring programs, employing women and minorities and local contractors.”

The third bill, AB 1431 (Gomez) gives school districts that enter into PLAs for all public works in excess of $25,000 the ability to use an alternative bidding procedure known as Job Order Contracting (JOC).

“Each of these bills sponsored by the Building Trades will improve construction workers’ lives and will set higher standards to ensure a fair and even playing field for contractors in the State of California,” Diaz said. “The Democratic members of the legislature from the Bay Area have done a fantastic job supporting the building trades. Not just on the core issues like prevailing wages and apprenticeship but also working to protect the environmental quality act and creating a balance between economic prosperity and protecting the environment.”

State Building Trades’ legislative representatives killed four bills supported by contractors associations and the Associated Builders and Contractors (ABC) in committees on April 20: Three attempts to stop high-speed rail (AB 6, AB 1097, AB 1138) and AB 1459, which pertained to toll-road authority. The bills would have undermined construction workers’ wages and given an advantage to contractors who operate within the underground economy.