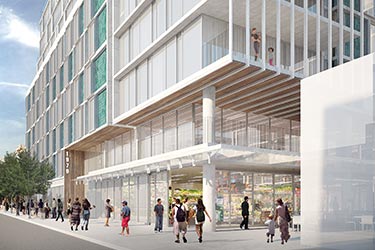 The developer held a meeting March 4 at the Laborers Local 261 union hall to share an updated version of the project and outline its benefits to the community. Maximus has held similar meetings since late summer 2013 to gain feedback from neighbors, and has modified its plans in response to their concerns. Activists allied with the Plaza 16 Coalition disrupted the March 4 meeting, interrupting the presentation and calling for any new projects in the Mission to be 100 percent affordable, below market rate housing. Several members of Laborers Local 261 attended the meeting and held up signs supporting the project.

“It was a lively meeting,” said Maximus spokesman Joe Arellano. “We presented our proposal to provide housing at all levels.”

“We are looking to address the need for middle class homes, which is a concern we have heard at other community meetings,” Arellano said. The units are designed to be affordable to teachers, public safety workers, and construction workers – middle class wage earners who don’t qualify for the below market rate/affordable units but can’t afford to buy market rate priced condos.

The developer also wants to use the profits from the sale of the 41 condominiums onsite to fund an additional 49 units offsite that would be below market rate. Maximus would pay about $12.3 million into the City’s affordable housing fund, which could be pooled with other developer fees to build more than the 49 units. While the City would decide where the affordable units would be built, Arellano said Maximus would push for having the below market rate housing built in the Mission. He said the developer agrees that there is a great need for affordable housing and identified sites in the Mission on Shotwell, Harrison and Mission streets. Arellano noted that the total of 90 units – including the middle income and below market rate units – is more than double the 40 that would be required under San Francisco’s 12 percent inclusionary affordable housing requirement.

“It’s not just $12.3 million we would invest for affordable housing; we will also invest in improvements to the BART plaza and Marshall Elementary School,” Arellano said. Maximus proposes to fully fund some school improvements, including raising the playground by 15 feet to address shadows. Last fall, in response to concerns from the school community, Maximus reduced the heights of the building closest to the school to 55 feet so there won’t be any additional shadows cast on the school’s playground. In addition, the sidewalks along Capp Street will be widened so Marshall Elementary parents and children have a safer space walking to school, and traffic will be slowed by having a narrower street.

“It’s a very strong proposal that addresses the concerns we have heard at community meetings,” Arellano said. “Since the meeting at the Laborers union, we have gotten a lot of support – from Local 261 and from neighborhood organizations. We are conducting more meetings with organizations in the Mission that have expressed support and plan to continue to get the word out about the benefits of the project.”

Community meetings and discussions with the School District, Planning Department, and the Mayor’s office continue as the project undergoes environmental reviews. The 1979 Mission project could go to the Planning Commission later this year, with construction starting early next year.