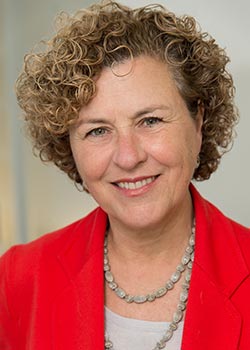 Supervisor Christensen attended the delegates meeting on March 26, where she talked about her track record and goals and answered questions from building trades representatives. She said she believes in “smart growth and sensible development in District 3,” noting that it is the oldest district in the city with limited room for new buildings.

“I believe in a sensible approach to planning,” Christensen said. “We have to deal with the increasing need for housing and how to get people around. I am involved in issues city-wide, but in District 3 we have different challenges. We have an opportunity to do sensible in-fill development. We can make sure zoning guidelines are suitable in terms of density without losing the character of the neighborhoods and doing our part to accept people moving into the city.”

Christensen said Mayor Lee would be putting forward a housing bond that would help fund construction of affordable housing and address the need for middle-income housing. The housing bond will provide funds for the acquisition of existing buildings to keep them affordable and to renovate the ones that need to be upgraded, and will fund construction of middle income housing.

“We are trying to preserve the existing affordable housing and make sure the housing stock is up to code,” she said.

At the March 24 Board of Supervisors meeting, Christensen introduced a resolution supporting State Senator Mark Leno’s SB 364, which would return local control of the Ellis Act to the City and County of San Francisco. Christensen told the building trades delegates that Leno’s legislation is aimed at speculators and serial evictors, and includes exemptions for small “mom and pop” property owners. She added she would also call a hearing to identify programs and resources available to assist in the preservation and retention of existing market-rate housing, particularly rent-controlled units that are high risk targets for eviction.

Along with jobs and housing, Christensen said the next area to address is infrastructure – roads, schools, public transportation, parks and public safety.

“I very much appreciate the endorsement of the building trades – it’s a validation of the work I’ve been doing and that we share a lot of the same goals.”

“We need to sustain the community we are building and find the balance of adding new residents without losing what made us love this city,” she said. She cited as an example the new North Beach Library she successfully campaigned to have built. Christensen has worked for over 20 years with elected officials, City departments, community organizations and neighborhood volunteers on civic projects to make improvements in District 3. She led the drive to extend the Central Subway to the northern waterfront, worked on streetscape improvements to enhance pedestrian safety as well as redesign several parks in her district.

Christensen said land use is a volatile issue in District 3 that impacts the whole city. She said there are some changes coming, including new theaters on the Broadway corridor. She commented that she had served on the board of the Telegraph Hill Dwellers when the organization was more broad-based and not so resistant to new buildings, but that she has since had success in battles with the group. “It’s hard to make changes, the new library took 10 years,” she said.

Among those who fought construction of the North Beach Library was former District 3 Supervisor Aaron Peskin, who announced on March 27 that he would seek election to his old position on the Board of Supervisors. Christensen told Organized Labor that people concerned that it took over 10 years to get the North Beach Library approved and built should, “just ask my competitor why.”

“Voters have a clear choice in terms of the approach and focus,” Christensen said. “I’m not a politician, but I have many years of experience working to provide services for seniors and families. I have worked for 20 years on things like improving transportation, pedestrian safety, parks and libraries. I have a 20-year track record for common sense solutions and services. I’ve been involved in supporting good projects with good jobs that enable workers to live in the City.”

On her candidate questionnaire, Christensen indicated she supports project labor agreements as well as adequately funding the City’s Office of Labor Standards Enforcement.

“I very much appreciate the endorsement of the building trades – it’s a validation of the work I’ve been doing and that we share a lot of the same goals,” Christensen said. “Some of the members and Mike Theriault have been involved in the rallies we have had for the extension of the Central Subway. We have a lot of work to do and I look forward to working with the building trades.”

Prior to joining the Board of Supervisors, Christensen was a nationally recognized, award-winning expert on product development and design strategy who worked for a long list of prominent national and international companies. She is a 36-year resident of San Francisco who has spent 33 of those years in District 3. She and her husband Greg Smith, a San Francisco native and small business owner, live in North Beach.

The municipal election will be held Nov. 5.