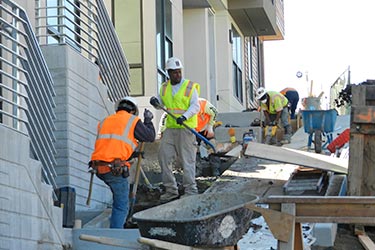 Construction of First Group of Homes Finished at Massive Redevelopment

Construction of the first group of new homes for Lennar’s Shipyard project at the Hunters Point Naval Shipyard has been finished and all 83 of the units have been sold. Jermaine Smith, Site Development Manager for Lennar, gave Organized Labor a tour of the development in early March. Smith said the new townhouse units in the Block 51 section of the project’s Hilltop neighborhood will be ready for occupancy in mid-April.

The Hilltop area, which broke ground in June of 2013, is part of Phase I of the development, which will have 1,400 housing units ranging from studios to three bedrooms. The Hunters Point Shipyard and the nearby Candlestick Point will be the largest redevelopment effort in San Francisco since the 1906 earthquake. The nearly $8 billion, 750-acre development will include 300 acres of parks, new retail and cultural centers and more than 12,000 new residential units, with more than one-third of those affordable to low-income households. The projects are expected to combine for more than 10,000 permanent jobs and generate several thousand construction jobs over the next 20 years. The Lennar projects are being done under a project labor agreement with the building trades.

“Our goal for local hires is 50 percent,” he said. “We are achieving that goal with the help of CityBuild, averaging between 48 and 51 percent.” The local hire percentages are based on work hours, not just the number of workers on the job. The developer holds regular community meetings to report on the progress of the construction and the hiring of local workers, addressing concerns of the community that has experienced high rates of unemployment.

Smith said that one challenge in meeting local hire goals is that “the economy is good, and there are lots of opportunities and jobs” in construction, so workers have some mobility and choices in employment. He noted that many of the local hires are laborers and said he would like to see more local workers get into skilled trades.

Other contractors include Three Brothers Electric, E.W. Scott Electric, Allied Framers, Blue’s Roofing Company and Monarch Mechanical. Crews from Anvil Builders are putting the finishing touches on the new Innes Court playground that overlooks the bay. While the bulk of the work crews consist of Carpenters and Laborers, there is a crew of Glaziers from USGA glazing installing windows, and crews from Custom Drywall doing interior finish work.

As part of its development agreement with San Francisco, Lennar agreed to contribute $37.5 million in job training and affordable housing benefits for the Bayview-Hunters Point community. The developer also pledged to enable the existing community of artists who have studios in some of the old warehouses at the naval shipyard to stay. Some will be relocated to new studios when the warehouses along the waterfront are razed to make way for the next phase of housing.

Smith said that in addition to the Shipyard and Candlestick Point projects, Lennar would begin work on the development of Treasure Island, and that within the next two to three years, “there will be three or four times the amount of work.”