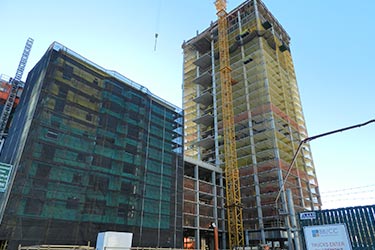 Mercy Housing is the developer of the eight-story apartment complex at 280 Beale, left, under construction on Block 6 of the Transbay Transit District. Mercy is one of the developers participating in the new partnership between the City of San Francisco and HUD. - Photo by Paul Burton

A new partnership between the City of San Francisco and the federal Housing and Urban Development (HUD) agency will fund the rehabilitation work of potentially more than 4,500 public housing units. Mayor Ed Lee and HUD Secretary Julián Castro announced on Feb. 19 an agreement for a $1.4 billion transformation plan for San Francisco’s public housing system that will allow the city to leverage approximately $780 million in investor equity and other new resources and allow for the rehabilitation of up to 4,584 public housing units for 5,400 low-income San Franciscans.

The agreement is a key component of Mayor Lee’s “Re-Envisioning Public Housing” plan he proposed in 2013. It takes advantage of a program unveiled by HUD in 2012, the Rental Assistance Demonstration (RAD) program that will allow the San Francisco Housing Authority (SFHA) to access resources such as debt financing and low income housing tax credits and green-light more than $500 million of repairs for more than 4,500 SFHA public housing units over the next three years.

“This innovative public-private partnership offers a bold new model for the nation in repairing public housing without losing units or shortchanging residents,” Congresswoman Pelosi said in a press release. “By working together – uniting private capital, public oversight, and local housing nonprofit experts –we are able to transform both these apartments and the lives of families who live here.”

Mayor Lee heralded the “innovative tool” of the partnership with HUD.

The rehabilitation work will be broken into two phases, each including immediate repairs necessary at 29 SFHA buildings – totaling 3,500 units in nine of the city’s 11 Supervisorial districts. Phase 1 will rehab 1,425 units starting in November 2015 and continuing through April 2017; Phase 2 will see 2,066 units get repairs starting in July 2016, to be completed by December 2017.

Number of public housing units that could be rehabbed

The Mayor’s Office announced that, “3,500 of the apartments will be rehabilitated as a portfolio and converted to new ownership and property management by community based non-profit affordable housing developers.” The change is among the biggest public housing portfolio conversions in the country. The Housing Authority will still own the land, which guarantees that the sites will continue to be used for low-cost public housing for low-income San Franciscans; the developers will lease the housing stock.

The non-profit developers will include Bridge Housing, Mercy Housing, Chinatown Community Development Center, and Tenderloin Neighborhood Development Corporation (TNDC), among others. All have worked on recent projects that employ union building trades members.

Mercy Housing California is the developer of the eight-story apartment complex at 280 Beale also under construction on Block 6 of the Transbay Transit District that will feature the 70-unit affordable rental units. TNDC partnered with the Union Labor Life Insurance Company on the new 15-story, below market rate residential project at 1400 Mission currently being built with all union labor. Chinatown Community Development Center was the developer for the all-union renovation of 150 Otis in 2011 that now provides 76 apartments for formerly homeless veterans.

All the non-profit developers also have experience managing low-income housing projects and providing onsite services to tenants. The new RAD program will also have “tenant engagement services and access to neighborhood resources,” according to the Mayor’s Office.

A 2013 report by the Mayor’s Office of Housing and Community Development, “SFHA Re-Envisioning,” noted that, “With a severe decline in federal funding over the years, the San Francisco Housing Authority as it is currently constituted cannot adequately deliver housing services to its residents.” The new partnership through the RAD program is seen as a way to create a stable stream of funding for the rehab and maintenance of public housing in the city.

The SFHA has agreements with building trades unions for some of the construction and repair work that has been done over the years. Many of the non-profit housing developers have good track records of using union contractors. The San Francisco Building and Construction Trades Council is negotiating a project labor agreement with the Housing Authority for the rehabilitation work and has substantial agreement on all major issues.