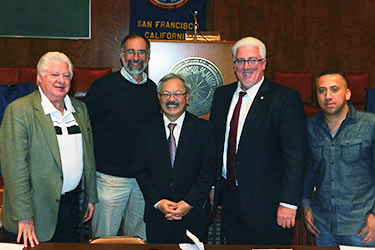 Delegates to the San Francisco Building and Construction Trades Council voted to endorse Mayor Ed Lee for re-election at a meeting on Jan. 15. Mayor Lee attended the meeting and talked about his record and improvements in the city’s economy over the last few years.

“Unemployment is down and I’m working to make sure jobs are created – not just in construction, but in health care, local manufacturing, hospitality and retail,” Lee said. “I want a diverse economy. I want to see good paying jobs that are sustainable, and new businesses.”

Lee noted that there are five hospitals under construction in the city and said “we are having discussions with the Veterans Administration and Kaiser [Permanente] about building hospitals in San Francisco.” Lee added that he has been an advocate for planning and the responsible use of bonds to help fund public works. “There is more support on the Board of Supervisors now for good, smart planning,” Lee said. He reminded delegates that he was a strong supporter of raising the minimum wage and the increase approved by voters last November.

SFBCTC Executive Secretary-Treasurer Mike Theriault asked Mayor Lee to help the Building Trades defend Senate Bill 7, which mandates that charter cities must pay prevailing wages on public works projects in order to receive state funding. The California League of Cities is backing a lawsuit against SB7 through an amicus brief. “We ask that you urge the League of Cities to drop its support for the attack on SB7,” Theriault said. Lee replied: “You have my pledge.”

Danny Campbell of Sheet Metal Workers Local 104 asked Lee to support the Council’s Sustainability Resolution. Campbell said the resolution calls for building more middle-class housing and ensuring that workers building the housing will be paid area standard wages. Mayor Lee signed the pledge and said it sounded like his own words. Lee said he loves seeing all the cranes around the city and the new construction. He talked about his plans for building more housing affordable to low income and middle class families. “I’ve made a strong commitment to build more housing that working families can afford,” Lee said. “Firefighters should be able to afford to live [here], and not have to commute from the East Bay to get to work.” He said the Interfaith Council was committed to building more workforce housing and that, “when labor, business, government and nonprofits come together, we can solve problems.”

In the mayor’s State of the City address Jan. 15, he outlined his goals for “shared prosperity” through “Affordability Directives” regarding city investments in housing, education, transportation, women’s empowerment and anti-poverty programs.

For housing, Lee proposed expanding city funding to support renters and eviction defense so people don’t lose their homes, and to increase down payment assistance through loans for first-time moderate and middle-income homebuyers; committed to working with State Senator Mark Leno and Assemblymember David Chiu to reform the Ellis Act so it can’t be misused by speculators to evict long-time tenants for profit; and proposed placing a bond measure on the November 2015 ballot to fund the rebuilding of the city’s public housing. The mayor will also create a fund with private and philanthropic partners to enable nonprofits to buy land for building affordable housing and purchase buildings to be improved as permanently affordable units.

At the SFBCTC Delegate’s meeting, Lee thanked Council’s President Larry Mazzola for his service on the San Francisco International Airport Commission, and said, “I will continue to appoint good labor people to city commissions – you really help me.”

Mayor Lee is running for his second full term this November. He was appointed by Gavin Newsom and served as interim mayor starting in January 2011, then elected to a full term in November 2011.

Currently, no other candidates have declared for the 2015 election. State Senator Mark Leno was reported to be interested in running for mayor, but announced in December that he would not seek the office. Former Supervisor and Assemblymember Tom Ammiano has been mentioned as a potential candidate, but has made no public statements.

When Lee was sworn in as mayor in January 2011, he said he would work to “balance the budget, create jobs, and make our city more financially secure.” Theriault said Lee had made progress on those goals and had earned the support of the Building Trades.