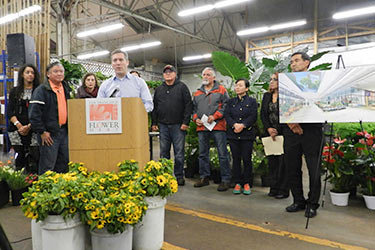 Kilroy Realty Corporation recently announced a partnership with vendors at the San Francisco Flower Mart, taking the next step in its planned development in the South of Market neighborhood.

At a press conference on Dec. 17, the developer committed to preserving the facility at its current location at Sixth and Brannan streets in SoMa. Kilroy also pledged to build a new, state-of-the-art facility and offered all vendors and tenants a five-year extension of their leases at their current rent and terms.

“Over the past several months we have been working to finalize our agreements with Kilroy and begin designing the new Flower Mart facility,” Otsuka said. “When this facility was built in 1956, it was state of the art, but not now. The San Francisco Flower Mart will remain the traditional anchor for small businesses and working class jobs in a neighborhood that is going through an exciting transformation. We realize what the San Francisco Flower Mart means to San Franciscans and are dedicated to preserving it at its current site.”

Under the terms of the deal with Kilroy, CFM, which has managed the flower market in San Francisco for more than a century, will continue to operate both the new facility when it is completed and the existing facility. The new facility will have 115,000 square feet of warehouse space with 150 parking spaces underground to serve wholesale customers and an additional 10,000 square feet of retail space for the flower vendors.

Kilroy Realty Corporation Senior Vice President Mike Grisso said CFM and Kilroy Realty have met with the tenants in the Flower Mart to discuss the partnership. He said the developer was committed to working with the vendors to discuss the design as well as issues like technology, refrigeration, parking and access. Kilroy purchased part of the Flower Mart property in 2013, and the former San Francisco Flower Growers’ Association property within the site in October. Grisso said the office development part of the project is still in the planning stage and a contractor for the project hasn’t been chosen. Kilroy Realty has several projects underway in San Francisco, including 350 Mission St. and 333 Brannan St. in SoMa, and 1800 Owens St. in Mission Bay.

“CFM and Kilroy Realty have agreed to affordable rent levels in both the existing and new facility,” said Steve Oku, owner of Oku Nursery, a tenant of the Flower Mart for more than 20 years, and president of the Board of Directors of CFM. “The leases offered enables us to plan for our future in a way that we could never do on our own without this partnership. The agreement not only ensures that we will have a new Flower Mart, but that it will be affordable to the current tenants, which has been our goal all along.”

Oku, whose grandfather helped start the market, said none of the tenants would be displaced. Several vendors spoke in support of the deal and said the new facility will help attract new customers and increase sales.

The California Flower Market was founded by Japanese immigrant flower growers at the beginning of the 20th century, and is one of the oldest and most successful Japanese-American-owned corporations in the United States. It has been at the center of the wholesale flower industry in the San Francisco Bay Area for nearly a century. It now serves as a wholesale and retail outlet for florists, grocers, retailers and individuals. Otsuka said that in the past the flowers sold at the Flower Mart “were locally grown and arrived by truck. The Flower Mart has evolved to handle flowers from throughout California, as well as from Central America, South America and Europe.”

The new San Francisco Flower Mart is tentatively scheduled to be completed in 2018. The proposed project will include office space above the underground wholesale flower market and ground-level retail space. Kilroy Realty describes it as a “real destination – a mixed-use development where flower vendors, retail tenants, office users, and visitors mingle together to create a unique, organic environment that complements all of the varied uses on the site.”

In order to meet that goal, the developer first must win approvals from the City, and fight potential challenges to changes in height limits in the area and changing the zoning from light industrial to office uses. A group led by former Mayor Art Agnos and former San Francisco Supervisor Aaron Peskin have vowed to put forward a ballot measure similar to the waterfront heights limit initiative to force the project to win voter approval before moving forward as planned. Peskin attended the Dec. 17 press event at the Flower Mart and said he represented some vendors who were concerned about rent increases and local residents who opposed the height limits and zoning changes.

Grisso said CFM and Kilroy are addressing the concerns of the ballot measure proponents. Several flower vendors questioned Peskin and said a large majority of tenants want a new facility and support the new project.