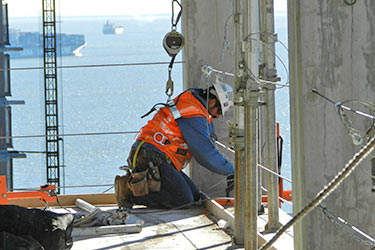 Crews of ironworkers worked on 299 Fremont in December. There are between 260 and 275 workers on the project currently, with more than 300 during some of the concrete pours. - Photo by Paul Burton

A new 32-story residential tower at 299 Fremont St. is now at about two-thirds of the way up, rising alongside the eight-story apartment complex at 280 Beale St. also under construction on Block 6 of the Transbay Transit District. The two buildings, with a connecting parking structure, broke ground in December 2013. Golub & Co. is the developer for the $200 million, 409-unit luxury high-rise complex, with non-profit developer Mercy Housing California building the 70-unit affordable rental building. The complex will also include a row of seven townhouse residences, a ground-level courtyard and street-front retail along Folsom and Fremont.

In late December, crews of ironworkers from Gerdau were tying rebar and setting post-tension beams on the 23rd floor in preparation for the concrete pour at that level. The building has a central core with slick lines going up for the concrete pour. Dugan said Webcor Concrete is the contractor for the concrete work. There are between 260 and 275 workers on the project currently, with more than 300 during some of the concrete pours. BBCC has a crew of laborers doing gate control, traffic control, site management and security.

Dugan said the logistics for scheduling deliveries of materials are complicated in a neighborhood where there are many other projects under construction. He said the contractors are fortunate that they can use the adjacent Block 7 site as a staging area for deliveries and materials.

Mercy and Golub plan to start construction on the Block 7 site in the first quarter of 2016, according to Sheela Jivan, Mercy Housing’s Regional Director for California. Block 7 will include between 80 and 100 affordable rental units. Jivan said that while, “We usually do our own projects to build affordable housing, we do have experience working with market rate developers.” Mercy Housing California has developed 125 properties in California serving low- and very low-income working families, seniors, formerly homeless individuals and people with disabilities. The affordable housing units include 7,652 rental homes and 3,002 single-family homes.

Projects planned for Blocks 8 and 9 will also be built through partnerships between market rate and non-profit developers, Jivan said. She said building affordable housing also “has to make financial sense for developers. We have an affordable housing crisis.” With the loss of redevelopment and cuts to state funding, as well as high construction costs, “it’s an ongoing struggle,” Jivan continued. “We are getting a significant number of affordable units in the Transbay neighborhood, which is great.”

BBCC’s Dugan said he thought the partnership between a private market rate developer and a non-profit affordable housing developer was a benefit and would help to enable lower income residents to remain in the area. And while the eight story affordable building doesn’t include the same amenities as the 32-floor tower, it will feature new apartments that are comfortable, energy efficient and close to public transit. Dugan said the buildings will be LEED Gold, with energy efficient design and components, and some use of natural light and ventilation. The project also gets credit towards LEED status by being close to public transit, featuring car share and bicycle parking, and for reclaiming a former brown field industrial site. The project fits with the city’s goal to expand housing in the Rincon Hill and Transbay Transit neighborhoods.

“The green building trend is good for everybody,” Dugan said. He noted that the construction practices for LEED buildings aren’t really different for the construction crews. “It’s mostly about the design and technology side for the HVAC systems or the plumbing,” he said. “It’s not difficult for the construction trades, and most workers know some different techniques, like keeping HVAC systems free from dust.” Dugan said Broadway Mechanical and O’Brien Mechanical formed a joint venture as subcontractors for the plumbing and HVAC work. They are doing the design-build with metal ducts and pipes for the plumbing and the fire safety systems built by the contractors. Pipes are built by Broadway Mechanical in Oakland and then marked and bundled for installation. “There are lots of pre-fab components,” Dugan said.

Dugan said the joint venture between the two contractors has worked out well. “It helps to have the resources and to share the risk on big projects. The two contractors complement each other – Cahill has lots of experience building affordable housing and doing projects in San Francisco, and Balfour Beatty has lots of experience building high-rises.”

Other union subcontractors include Sprig Electric, Daley’s Drywall & Taping and Western States Fire Protection Co. for sprinkler fitters. The general contractor is also complying with city requirements for using small local contractors and suppliers, with about 38 percent. Interior work is following the concrete pours up the levels with many of the interference walls being built now for the elevator shafts, electrical and mechanical system rooms and stair wells. Mitsubishi Electric is the subcontractor for elevators. Interior rooms are steel frame construction for fire resistance. Dugan said the curtain wall work will begin in late January. Crews of glaziers from Architectural Glass & Aluminum recently started doing prep work and installing the fittings for the exterior glass. Interior finish work will follow three floors below and move up as the curtain wall is being built.

The tower at 299 Fremont St., now called Solaire, is scheduled for completion by December 2015, with the 8-story building to be completed in June 2015.