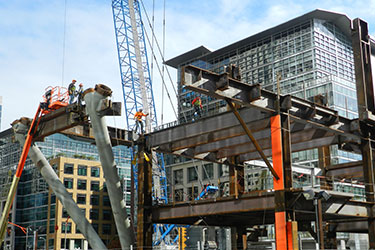 The Transbay Transit Center will include more than 22,000 tons of steel. The first pieces of the steel superstructure recently emerged from below ground. - Photo by Paul Burton

The first pieces of the steel superstructure for the Transbay Transit Center are now rising above ground. Crews of ironworkers with subcontractor Skanska USA Civil Inc. began erecting steel for the above-ground floors of the new five-story Transit Center in early November. Representatives from the Transbay Joint Powers Authority (TJPA), construction workers and elected officials celebrated the milestone with an event on Nov. 7.

“On this day, the Transbay Transit Center begins to emerge from the ground,” said TJPA Executive Director Maria Ayerdi-Kaplan at the ceremony. “This steel column is the first of many that will rise together to form a Bay Area icon, a world class station that will combine eleven different public transit systems under one roof.”

Mike Theriault, San Francisco Building and Construction Trades Council Secretary-Treasurer, emphasized the impact of emerging steel. “It’s the first time since work began in 2010 that the public will get to see the results of the work of the construction crews, now that the steel is visible above ground.” Theriault said the steel pipe columns and cast nodes will support the architecturally unique parts of the structure.

Designed by Pelli Clarke Pelli Architects, the Transit Center will feature a metal skin of perforated aluminum with many curved elements. A 5.4-acre park on the roof of the bus and rail station will double as a “green roof” for the transit facility.

A press release from the TJPA noted that, “The Transbay Transit Center features an innovative design that requires many different types of steel elements, some single pieces as large as 130,000 pounds. The steel pipe columns and cast nodes that form the exoskeleton of the structure are engineered to exacting specifications that are test-fitted at the fabrication site to ensure quality.” The agency reported that the Transit Center will include more than 22,000 tons of steel, “all of which was supplied and fabricated domestically in accordance with the project’s Buy America status.” Steel plants in California and 18 other states are supplying the steel, including columns featuring a seismically safe design that hasn’t been used before in the United States. Around 3,000 of the 8,000 construction jobs created by the project are associated with steel production.

“The column we are raising in celebration today was built in the United States by American labor and will be installed by American labor,” said Ayerdi-Kaplan. “With each additional column added, we will be one step closer to a city and a region that is more interconnected, more sustainable, and more economically vibrant than ever before.”

The TJPA noted that the beginning of steel assembly is just one of a number of significant construction milestones – the project completed its five-foot thick foundation that required 60,000 cubic yards of concrete, and began work on the new bus ramp that will connect an elevated bus deck directly to the Bay Bridge.

The structural steel assembly for the Transit Center is on schedule to be completed by mid-2016. Union contractor Skanska USA won the $189.1 million contract to supply and erect 24,000 tons of structural steel for the Transbay Transit Center last July. The contractor’s public works division, Skanska USA Civil Inc., was also awarded the contract to build the Metro Purple Line extension in Los Angeles in early November. Headquartered in New York with West Cost offices in Riverside, Skanska USA is the sixth largest heavy contractor by revenue in the U.S.

Webcor Builders, in a joint venture with Obayashi, serves as the prime contractor for the Transit Center. Other contractors recently awarded contracts for the project include Desert Mechanical for Plumbing and HVAC, Fisk Electric, Otis Elevator, Olson & Company Steel for metal stairs, and Sheedy Drayage Company for Rooftop Crane Services.

Construction of the $4.5 billion Transbay Transit Center project began in 2010, after demolition of the old Transbay Terminal at First and Mission streets. The project is funded by a mix of state and federal grants, local transportation agencies, and Proposition K sales tax revenue. The project received a major boost when it received $400 million in federal stimulus funds from the American Recovery and Reinvestment Act in 2010.

Other speakers at the Nov. 7 ceremony included East Bay Assembly member Nancy Skinner and California High Speed Rail Board Chair Dan Richard. The Transit Center will be the northern terminus of the state’s high speed rail line when that system is completed. The Transbay Transit Center is described as the “Grand Central Station of the West” that will connect eight Bay Area counties and 11 transit systems, including AC Transit, BART, Muni, Golden Gate Transit, Greyhound and the future high speed rail from Los Angeles to San Francisco. When finished, it will accommodate approximately 100,000 travelers daily. The opening of bus operations is scheduled to begin in late 2017.